Feds seize more than 16 tons of cocaine at Philadelphia terminal 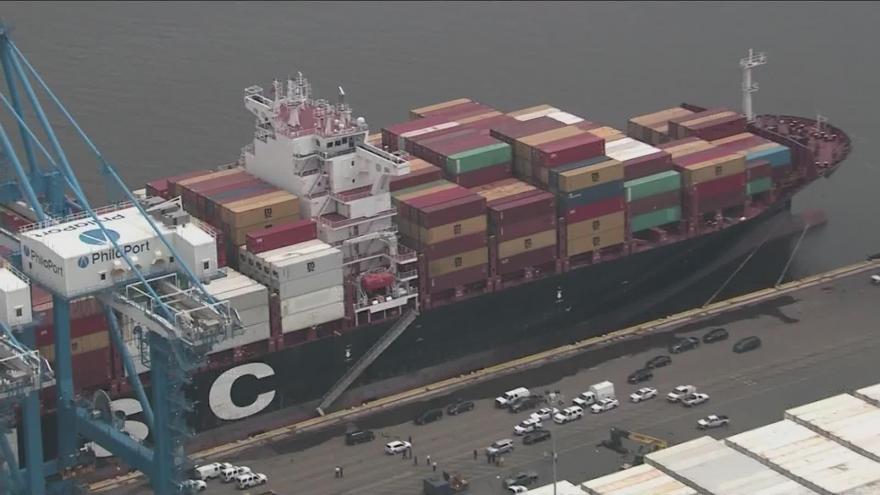 **Embargo: Philadelphia, PA** Federal authorities seized about 16 1/2 tons of cocaine from a large ship at the Packer Marine Terminal in Philadelphia, prosecutors said.

(CNN) -- Under the cover of night, members of a ship's crew loaded "bales" of cocaine onto a vessel bound for the United States, expecting to earn tens of thousands of dollars for the job.

Instead, US authorities seized the haul, totaling about 16 and a half tons with an estimated street value of $1 billion, according to federal prosecutors.

The drugs were found Monday in seven shipping containers on the MSC Gayane after it arrived at Packer Marine Terminal in Philadelphia, according to a federal complaint filed Tuesday in US District Court for the Eastern District of Pennsylvania.

The US Attorney's Office called it one of the largest drug seizures in US history.

"This amount of cocaine could kill millions -- MILLIONS -- of people," US Attorney William M. McSwain said in a tweet. "My office is committed to keeping our borders secure and streets safe from deadly narcotics."

The complaint accuses the ship's second mate and another crew member of intentionally conspiring to possess a controlled substance on board a vessel subject to US jurisdiction.

According to federal investigators, the two confessed to their roles and provided details of the operations, which are included in an affidavit attached to the complaint.

The alleged operation included nets, a crane and cryptocurrency

Second mate Ivan Durasevic expected to be paid $50,000 in cryptocurrency for helping load the cocaine onto the vessel, Department of Homeland Security Special Agent Eric Mooney said in the affidavit.

While it was at sea, 14 separate boats approached the vessel at different points carrying bales of cocaine wrapped in netting.

Durasevic used the ship's crane to load the bales onto the vessel along with replacement seals for containers that the cocaine would be concealed within.

He was assisted by seaman Fonofaavae Tiasaga, who allegedly admitted his role in bringing the cocaine onto the vessel and helping conceal it within legitimate cargo, the affidavit states.

Durasevic and three other crew each agreed to pay Tiasaga $50,000 for his help. According to the affidavit, Tiasaga said the four crew members each coordinated individual loads of cocaine.

Tiasaga assisted in bringing the nets on board and moving them into containers.

A kilogram of cocaine sells for about $28,000, according to the UN Office on Drugs and Crime's 2016 estimate. At that price, sold by the kilo, the drugs would be worth more than $419 million.

The seizure comes on the heels of several major busts at the Port of Philadelphia, located about 8 miles up the Delaware River from the Packer Marine Terminal.

The Port of Philadelphia said the situation was still developing and that it had no comment.