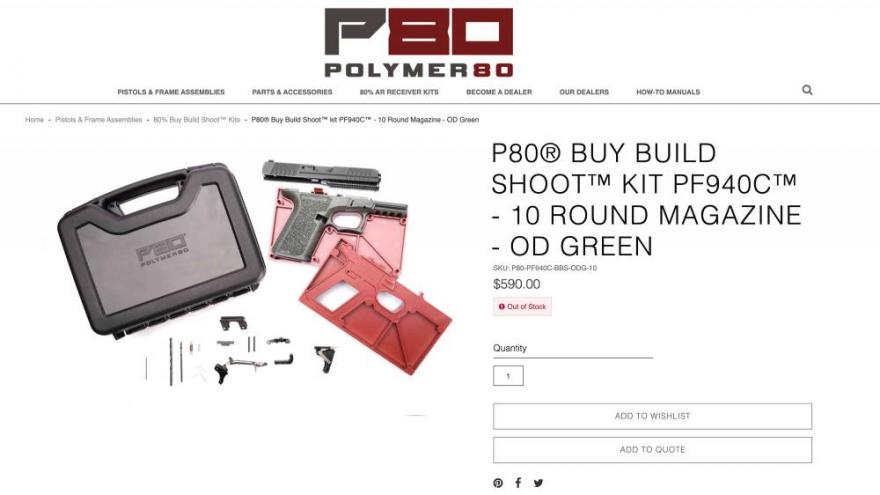 Polymer80's "Buy Build Shoot" kit is at the center of a federal investigation into the Nevada company, which was raided by the ATF.

(CNN) -- First, there was a home-invasion-style robbery in April 2019 that resulted in a triple homicide.

Three months ago, a pair of sheriff's deputies were shot while sitting in their patrol car.

And just last month, a 29-year-old man was fatally shot outside his home, allegedly by members of a street gang.

The three seemingly unconnected attacks in Southern California have one thing in common, according to federal authorities: So-called ghost guns recovered by police during their investigations all trace back to the same company in Nevada.

On Thursday, federal agents armed with a search warrant raided the company — Polymer80 — based on suspicion that it was illegally manufacturing and distributing firearms.

The ATF's investigation is centered on the company's "Buy Build Shoot" kit which consumers can purchase online, then assemble at home to create a fully functioning weapon, according to a 119-page search warrant affidavit unsealed Thursday in Nevada.

Guns produced from such kits are known as "ghost guns" because they do not contain serial numbers and are considered untraceable. Such guns have drawn the ire of law enforcement officials in recent years as they have been recovered at crime scenes and in police investigations with increasing frequency.

David Borges, the CEO and co-founder of Polymer80, said it was "a big surprise" when agents raided the company's facility in Dayton, Nevada, Thursday morning. He declined further comment in a brief telephone interview with CNN, noting that agents remained on the property carrying out their search.

Jason Davis, an attorney for Polymer80, said in an emailed statement that the company has a history of cooperating with the ATF and "will continue to do so." The statement added, in part, that "the company takes its legal obligations seriously" and is also committed to "vigorously protecting its rights under the law."

No arrests have been made in connection with the search.

The Bureau of Alcohol, Tobacco, Firearms and Explosives recently determined that Polymer80's kits meet the definition of a firearm under the law, even if they are not yet assembled. Based on that determination, the kits are subject to federal gun laws, such as background checks on buyers, which "it appears that Polymer80 does not conduct," the affidavit states. In addition, the document states, "it appears that Polymer80 shipped items to individuals determined to be felons and otherwise prohibited from purchasing or possessing firearms."

ATF officials, based on data from the agency's National Tracing Center, estimate that approximately 10,000 ghost guns were recovered in the US last year, including about 2,700 in California. Polymer80 guns were used in "hundreds of crimes throughout the United States," and about 15 of the company's weapons were recovered during homicide investigations in California, the document states.

Polymer80, which derives its name from the polymer plastic its products are made from, sells various firearms, firearm parts and accessories on its website.

The "Buy Build Shoot," kit is advertised as containing all the necessary parts to build a complete firearm, as well as a 10-round magazine and pistol case, according to the affidavit.

The ATF purchased multiple kits from the company's website, and an agent used one to build a functioning firearm in about three hours, according to the affidavit. A confidential informant working with the agency — a convicted felon with past experience with guns — was able to so in 21 minutes, the document states.

Following that scenario, a senior ATF agent determined that the kits fit the definition of a firearm which is described, in part, as a weapon "which will or is designed or may readily be converted to expel a projectile by the action of an explosive."

Thursday's raid was not the first sign of trouble for Polymer80. In June, Washington D.C. Attorney General Karl A. Racine filed a civil lawsuit against the company for advertising and selling its guns in the District, which Racine alleged was a violation of D.C.'s gun laws.

The Attorney General's office said in a press release that of the 250 ghost guns recovered by law enforcement in DC since 2017, 80 percent were made by Polymer80, including guns linked to nine homicides.