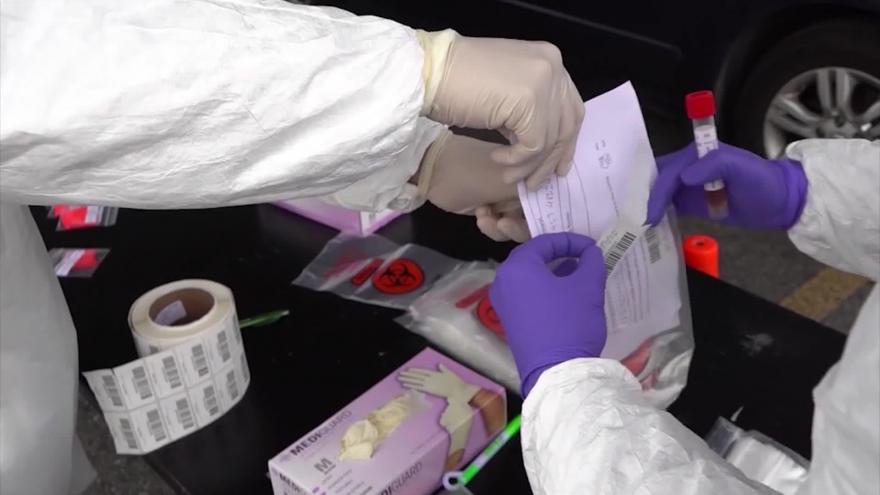 The Trump administration is pulling back federal support of testing sites by the end of the week, according to the Federal Emergency Management Agency, amid ongoing concerns over testing shortages nationwide.

(CNN) -- The Trump administration is pulling back federal support of testing sites by the end of the week, according to the Federal Emergency Management Agency, amid ongoing concerns over testing shortages nationwide.

The so-called Community-Based Testing Sites program was intended to jumpstart initial testing capabilities to critical areas across the US, according to the agency. But given FDA approval for individuals to self-administer nasal swab tests at sites, the demand for personal protective equipment and trained health care providers will be reduced, a FEMA spokesperson said in a statement.

The move has received mixed reactions. While some localities may need federal support, others have already moved toward managing their own sites.

"The federal involvement was they provided the test kits. As of last week, they were no longer involved and left all of the test kits to use as we deemed appropriate," Georgia's Department of Public Health said in a statement, noting that the state has been managing two of these sites.

"Under their guidelines we could only use them in two sites in the state, now we are free to disperse them as needed," the statement continued, referring to the test kits. "The sites were already in existence and running when they came in and they still are -- smoothly."

Washington state also expects to continue to support operations at community-based testing sites "to the greatest extent possible with the supplies that we have," according to Casey Katims, a federal liaison for Washington state, who underscored that the state has been providing personnel and locations for testing.

According to a FEMA advisory dated April 7 and obtained by CNN, federal community-based testing sites across 12 states have screened more than 64,000 individuals.

The lack of testing has been a point of contention between governors and the federal government, as the number of coronavirus cases increases. Health officials on both coasts have asked physicians to prioritize who they test amid the shortage. The criteria of who can receive testing and when also differs across states.

Over recent days, states have been transitioning to state-managed facilities. "After transition, states can choose to source testing kits and supplies through their standard ordering process or to request assistance from their FEMA Region," according to the FEMA spokesperson. States may also seek reimbursement "for eligible expenses associated with running their sites" through one of FEMA's programs.

Melaney Arnold with the Illinois governor's office told CNN that "the state stands ready to support these initiatives and is working around the clock to meet the supply-chain needs."

Arnold said the state was notified about the change on March 31. "The federal government announced plans to transition the existing sites to a state-led and managed operation," Arnold said. "The State of Illinois [has] been a staunch proponent of expanding testing capabilities."

Two cities in Texas -- Austin and San Antonio -- transitioned to local management for testing sites last week, though extensions have been requested for remaining sites, said Lara Anton, a press officer with the Texas Department of State Health Services.

However, Vice President Mike Pence underscored during Thursday's briefing from the White House coronavirus task force that the federal government would continue to help states as needed.

The administration is processing requests for continued federal participation in states "from New Jersey, to Louisiana, Illinois, Colorado and Texas," Pence added.

Two community-based testing sites in Pennsylvania counties will end Friday, according to Nate Wardle, a spokesperson for the state's Department of Health.

One of the sites located in Montgomery County that's expected to close this week, has been very effective since its opening on March 20, testing more than 4,500 individuals and getting 64% of the results back to date, according to Teresa Harris, a spokesperson at the county board of commissioner's office.

Dr. Valerie Arkoosh, chair of the Montgomery County Commissioners, told CNN in a statement that while the she appreciates the federal support, she's concerned about continued testing efforts in the coming weeks as coronavirus cases climb.

"While I'm grateful to have had federal and state support for our successful community-based testing site, I am understandably disappointed that the supplies and the federal contract for lab testing are ending just as we are heading into the surge here in southeastern Pennsylvania," Arkoosh said.

To offset the loss, they're currently reaching out to hospitals in the area hoping they can accommodate additional testing.

In an attempt to bolster testing, the administration has also partnered with the private sector to try to offer "drive-thru" testing.

In the Rose Garden on March 13, President Donald Trump hoped to showcase how the private sector, including lab companies, was assisting the federal government's effort to expand coronavirus testing throughout the country. After wrongly claiming days earlier that "anybody that wants a test can get a test," Trump was under intense scrutiny from lawmakers, state officials and health care providers who said there was a lack of adequate testing.

Vice President Mike Pence, who Trump put in charge of the administration's response, also touted the effort. He said public-private partnerships like the ones with these major retailers had "laid the foundation" to help meet the nation's testing needs by giving a "little bit of their parking lot so that people can come by and do a drive-by test."

But progress has been slow.