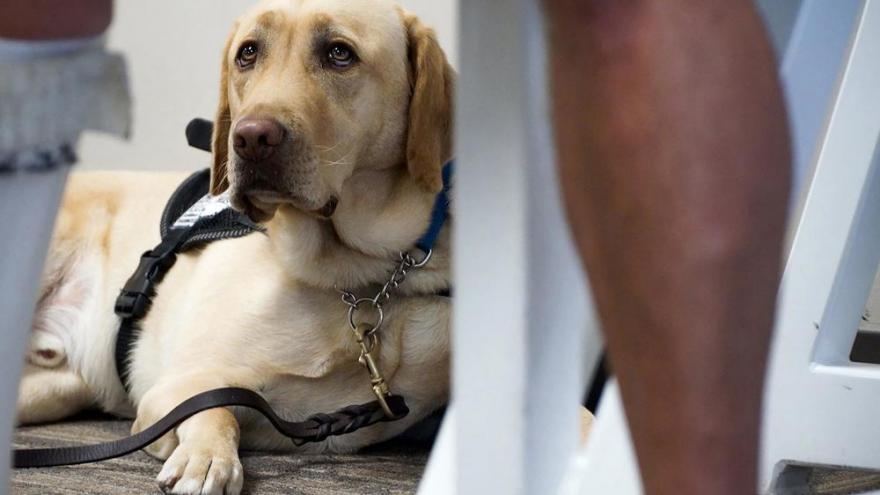 The concept of pets on planes has become a hot-button issue of late as emotional support animals have become more prominent than ever.

(CNN) -- A federal proposal unveiled Wednesday would significantly limit the types of animals entitled to fly in aircraft cabins as emotional support animals.

It's a crackdown the industry has sought amid concerns some passengers are bringing their untrained pets aboard by fraudulently passing them as emotional support animals. The result, the industry and Transportation Department have said, is an increase in incidents such as bitings aboard planes.

"The days of Noah's Ark in the air are hopefully coming to an end," said Sara Nelson, president of the Association of Flight Attendants-CWA, which represents 50,000 crew members.

The proposal would free airlines from the requirement to accommodate passengers' emotional support animals and reclassify them as pets. Airlines have greater leeway to determine their pet policies, including charging passengers fees and setting size limits.

It would continue to require airlines accommodate service animals, but restrict that category to dogs only. The current regulations allow a limited list of service animals species, including miniature horses.

The department is considering expanding the proposal to allow miniature horses, but is concerned they are less agile in the confined spaces of an aircraft, according to a Transportation Department official who briefed reporters on Wednesday morning.

The proliferation of websites selling a doctor's certification that a passenger requires an emotional support animal "has enabled people who are not truly in need of animal assistance to abuse the rules and evade airline policies regarding animals in the cabin," said the Airlines for America industry group.

Under the proposal, passengers traveling with a service animal would be required to fill out a government form certifying the animal has been trained specifically to assist them with a disability. Falsification of the form would be a crime, which the official said would serve as a deterrent.

"When there are abuses in the system, it's individuals with disabilities who suffer," the Transportation Department official said.

The department cited a number of reasons for the change, including the unusual status that emotional support animals enjoy in air travel.

"Animals on aircraft may pose a risk to the safety, health, and well-being of passengers and crew and may disturb the safe and efficient operation of the aircraft," the proposal says. It cited data that show "increases in the number of behavior-related service animal incidents on aircraft, including urinating, defecating, and biting."

The "many different unusual species of animals, such as a peacock, ducks, turkeys, pigs, iguanas, and various other types of animals" that passengers can bring aboard as emotional support animals causes confusion among passengers and burdened airline employees, it said.