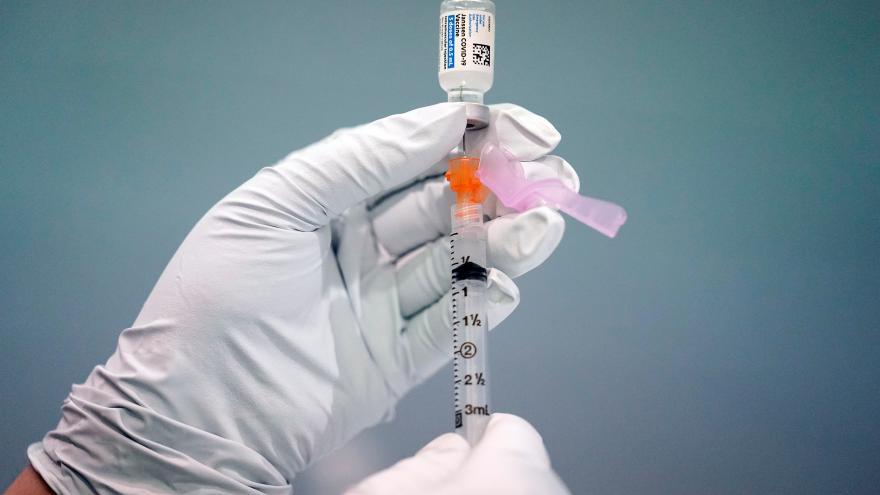 (CNN) -- US health agencies are taking concerns about blood clots and the Johnson & Johnson Covid-19 vaccine "seriously" and are working to assess whether the shot is associated with a very small increased risk of rare blood clots, a federal official told CNN.

"The CDC and the FDA are taking these concerns about blood clots and the J&J vaccine seriously and are diligently assembling data," the official said.

An expert outside the government who is familiar with the situation agreed that health officials are taking the matter seriously.

"The CDC is very concerned and they're very working hard on this and monitoring this closely," said the expert, who spoke on the condition of anonymity due to the sensitive nature of the issue.

There have been "four serious cases of unusual blood clots" reported after people received the Johnson & Johnson vaccine, according to European health authorities. Like their US counterparts, the European authorities say they're still investigating these cases and that "it is currently not clear" whether there's a causal association between the vaccine and the clots.

The concern in the United States isn't just about the Johnson & Johnson shot per se. At a time when US health officials are encouraging Americans to get vaccinated as soon as they can, there's a worry that news coverage about clots being studied in relation to Johnson & Johnson's vaccine might make some Americans more hesitant to get any Covid-19 vaccine.

Vaccine hesitancy is already an issue in the US, and officials at the US Centers for Disease Control and Prevention and the US Food and Drug Administration are "thinking through how to communicate about the issue without creating the impression that something might be wrong with the [Johnson & Johnson] vaccine," the federal health official said.

Another expert familiar with the situation said that was the right approach, stressing the importance of communicating without scaring people.

"I would hope that HHS is having a confab about this right now," the expert said, referring to the US Department of Health and Human Services.

In a statement, Johnson & Johnson said its tracking of side effects revealed "a small number of very rare events following vaccination. At present, no clear causal relationship has been established between these rare events and the [Johnson & Johson] COVID-19 vaccine."

The FDA released a statement last week that it was aware of reports of "serious thromboembolic events" in the US that occurred "in a few individuals following receipt of the [Johnson & Johnson] COVID-19 vaccines" and that "at this time we have not found a causal relationship with vaccination."

Last October, Johnson & Johnson paused its vaccine trial when a participant became ill. It resumed the trial about two weeks later, saying there was "no evidence" that the vaccine had caused the illness.

Publicly, the nature of the participant's illness remained a mystery until February, when the FDA revealed that a 25-year-old male study participant with no past medical history and who wasn't taking any medications received the vaccine and experienced a transverse sinus thrombosis.

About 3 to 4 people per 1 million experience this blood clot each year, and 75% of the adult cases are women, according to a 2005 study in the New England Journal of Medicine.

During Johnson & Johnson's clinical trial, there were reports of other types of blood clots, too. Some are relatively common, such as deep vein thrombosis, so it wasn't surprising that among roughly 20,000 participants who received the vaccine, some would experience those clots.

What made FDA scientists take note, however, is that in the trial, about the same number of people received a placebo -- a shot of saline that does nothing -- as received the vaccine. However, when comparing the two groups, more study participants developed clots after receiving the vaccine than the placebo.

The FDA report concluded that given this imbalance, "vaccine cannot be excluded as a contributing factor," and that the FDA would recommend "surveillance" for blood clots once the vaccine was rolled out.

The Johnson & Johnson vaccine was rolled out March 3, a few days after the FDA issued that report. Since then, more than 6.8 million people in the US have received it, according to the CDC.

Following manufacturing challenges, allocations of J&J's vaccine are expected to drop 84% this week, according to a CNN analysis of CDC data.

In this context, Andy Slavitt, White House senior adviser for Covid-19, said at a news briefing on Monday that the United States is still on track to reach its Covid-19 vaccination targets even without additional doses from Johnson & Johnson.

This isn't the first time blood clots have come up in relation to a Covid-19 vaccine.

By March, doctors in several European countries had begun to notice "very rare" cases of unusual blood clots among people who received the AstraZeneca vaccine.

The agency noted that its safety committee reviewed 62 cases of cerebral venous sinus thrombosis and 24 cases of splanchnic vein thrombosis, a type of blood clot in the abdomen, 18 of which were fatal. The cases were reported at a time when 25 million people in Europe and the UK had received the vaccine.

The European agency concluded that unusual blood clots with low blood platelets should be listed as "very rare side effects" of the AstraZeneca vaccine. While advising the public to look out for the signs of clots, the regulators said the benefits of the shot were still worth the risk.

The European Union authorized J&J's vaccine last month, and it's expected to be rolled out there in the next few weeks.

But the people who received the AstraZeneca vaccine and developed the clots hadn't taken heparin.

"It's actually very interesting," said Dr. Peter Kouides, immediate past president of the Thrombosis and Hemostasis Societies of North America. "The risk is very, very low, but it does seem to be a true disorder triggered by the vaccine."

He said there are treatments for this "very serious condition," but they don't always work.

"When you have [this] happen, all bets are off," said Dr. Hanny Al-Samkari, a hematologist and instructor at Harvard Medical School. "You can get clots anywhere. You can get them in your brain, in your belly, in your extremities, in your heart -- it doesn't matter. They can happen just about anywhere and obviously that's often problematic and/or fatal."

One part of J&J's statement drew ire from a prominent vaccine adviser to the FDA, as it seemed to say there were similar safety concerns about Pfizer and Moderna's vaccines, too -- which, he said, simply is not true.

"We are aware that thromboembolic events including those with thrombocytopenia have been reported with all COVID-19 vaccine," according to the Johnson & Johnson statement.

The company included a footnote to a study published in February that looked at 20 case reports of thrombocytopenia among people who had taken the Moderna and Pfizer vaccines as of February 2. By that time, more than 30 million people had received at least the first dose of one of those vaccines, according to the CDC.

Considering that's such a large number, it's not surprising some in this group would experience thrombocytopenia, a condition where there are low levels of platelets in the blood, said Dr. Paul Offit, a member of the FDA's Vaccines and Related Biological Products Advisory Committee. The issue, he said, is whether that number of people exceeded what would be expected if they had not been vaccinated.

He pointed to a CDC presentation in January that showed people who received the Moderna and Pfizer vaccines were actually less likely to experience thrombocytopenia or certain types of blood clots compared to those who were unvaccinated.

"That is a really irresponsible thing to say," Offit said, referring to the J&J statement. "It will unnecessarily scare people about Moderna and Pfizer when not only is there no evidence it's a problem -- there's evidence there is not a problem," added Offit.

A J&J spokesman declined to comment on Offit's criticism.