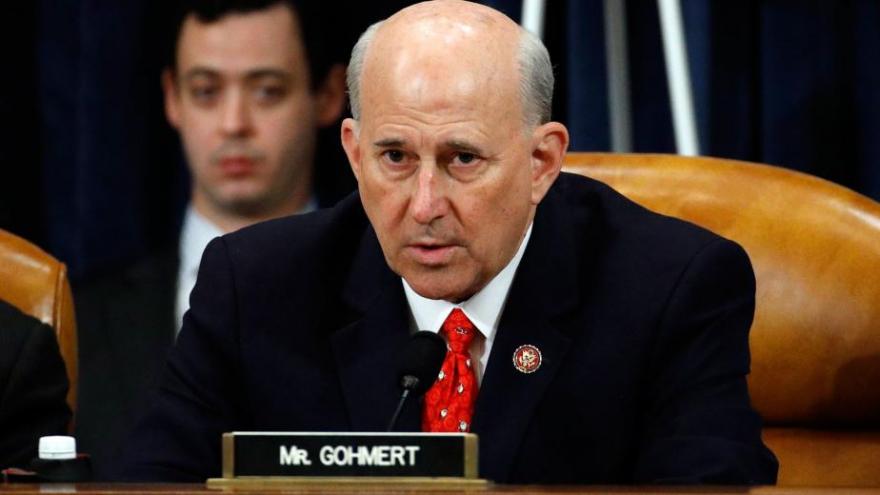 A federal judge threw out a lawsuit from Rep. Louie Gohmert of Texas and several Arizona Republicans seeking to force Vice President Mike Pence to help throw the election to President Donald Trump next week when Congress meets to count the Electoral College votes.

(CNN) -- A federal judge has thrown out a lawsuit from Rep. Louie Gohmert of Texas and several Arizona Republicans seeking to force Vice President Mike Pence to help throw the election to President Donald Trump next week when Congress meets to count the Electoral College votes.

Judge Jeremy Kernodle of the Eastern District of Texas said on Friday that Gohmert and the others lacked standing to sue. In a filing late Friday, Gohmert and other plaintiffs filed a notice of appeal to the Fifth Circuit of the US Court of Appeals.

Gohmert's suit was part of the desperate and extraordinary GOP attempt to overturn the presidential election using baseless and unproven allegations of mass voter fraud and charging that multiple states that President-elect Joe Biden won illegally changed their voting rules due to the pandemic.

Those arguments have failed dozens of times in state and federal courts over the past two months.

Gohmert and a slate of would-be Trump electors from Arizona had said only Pence could decide what electoral votes count -- a remarkable argument suggesting vice presidents can directly determine who wins a presidential election, regardless of the results.

Kernodle, who was nominated by Trump and confirmed in the Senate by voice vote in 2018, wrote that Gohmert "alleges at most an institutional injury to the House of Representatives. Under well-settled Supreme Court authority, that is insufficient to support standing."

As for the group of Arizona Republicans, who claimed that Biden's electors in the state were unlawfully certified, Kernodle wrote that they "allege an injury that is not fairly traceable to the Defendant, the Vice President of the United States, and is unlikely to be redressed by the requested relief."

Kernodle does not get into the constitutionality of the Electoral Count Act or Pence's ceremonial role overseeing the certification process in his 13-page opinion.

Pence on Thursday asked Kernodle to reject the case, arguing that the legal issues from Gohmert should be directed to the House and Senate, rather than the vice president. Pence's filing did not say if he would entertain the possibility of interfering in the Electoral College count, but there is no public indication that he will.

"Ironically, Representative Gohmert's position, if adopted by the Court, would actually deprive him of his opportunity as a Member of the House under the Electoral Count Act to raise objections to the counting of electoral votes, and then to debate and vote on them," Pence's filing added.

At least 140 House Republicans are expected to vote against counting the electoral votes on January 6, CNN's Jake Tapper reported Thursday. Gohmert has said he will be one of them.

There have been no credible allegations of any issues with voting that would have impacted the election, as affirmed by dozens of state and federal courts, governors, state election officials and the departments of Homeland Security and Justice.

Both a House member and senator are required to mount an objection when Congress counts the votes. Republican Sen. Josh Hawley of Missouri said Wednesday he will object, which will force lawmakers in both the House and Senate to vote on whether to accept the results of Biden's victory.

The Justice Department gave the White House a heads-up earlier this week that the Pence filing was coming, according to a person familiar with the matter. Word was sent to chief of staff Mark Meadows that the department would be asking the judge to reject the lawsuit. White House counsel Pat Cipollone was also aware it was coming.

It's not clear whether Trump, who remains furious at the Justice Department for its perceived inaction on voter fraud, was informed himself. He has taken an interest in Pence's role during the January 6 proceedings, though Pence and others at the White House have tried to explain to him that it's merely a ceremonial post.

House General Counsel Doug Letter filed an amicus brief with the court on Thursday, asking for the Gohmert case to be dismissed, calling it a "radical departure from our constitutional procedures and consistent legislative practices."

"At bottom, this litigation seeks to enlist the federal courts in a belated and meritless assault on longstanding constitutional processes for confirming the results of a national election for President," the House attorney wrote.

The Trump campaign is also continuing its quest at the Supreme Court with the same baseless and unproven voter fraud claims. It twice this week asked the court to overturn Biden's win in Wisconsin. Other cases from the President and his allies looking to throw out Biden's victories in Pennsylvania, Georgia, Michigan, Wisconsin and Arizona are pending on the court's docket.