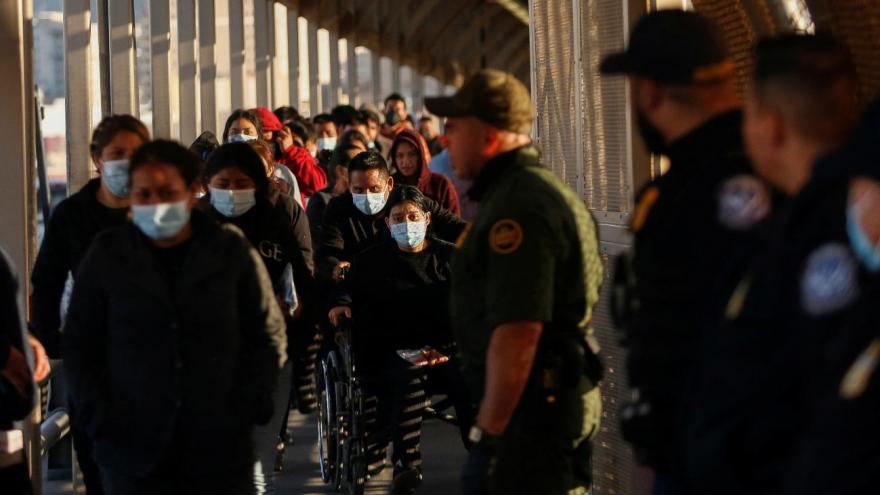 Migrants expelled from the U.S. and sent back to Mexico under Title 42, walk towards Mexico at the Paso del Norte International border bridge, in this picture taken from Ciudad Juarez, Mexico April 1, 2022.

(CNN) -- A federal judge in Louisiana temporarily blocked the Biden administration from ending a Trump-era pandemic restriction on the US-Mexico border.

The Biden administration had been on track to end the public health authority, known as Title 42, on May 23, a decision that has been criticized by Republicans and Democrats alike. The measure allows border authorities to turn migrants back to Mexico or their home countries because of the public health crisis.

Monday's order from Judge Robert Summerhays is unlikely to change the situation on the ground, given that the public health authority remains in place, but it may throw a wrench in the administration's plans moving forward.

"The Court discussed the Motion for Temporary Restraining Order [ECF No. 24] filed by Plaintiffs. For the reasons stated on the record, the Court announced its intent to grant the motion. The parties will confer regarding the specific terms to be contained in the Temporary Restraining Order and attempt to reach agreement," Summerhays wrote Monday.

"We applaud the Court for approving our request for a Temporary Restraining Order to keep Title 42 in place," said Arizona Attorney General Mark Brnovich in a statement. "The Biden administration cannot continue in flagrant disregard for existing laws and required administrative procedures."

"In a lawsuit originally filed by Missouri, Louisiana, and Arizona, our Office just obtained a temporary restraining order to keep Title 42 in place. This is a huge victory for border security, but the fight continues on," Missouri Attorney General Eric Schmitt tweeted on Monday.

Texas filed a separate case also seeking to block the end of Title 42. A federal judge in Texas has yet to rule on that case.