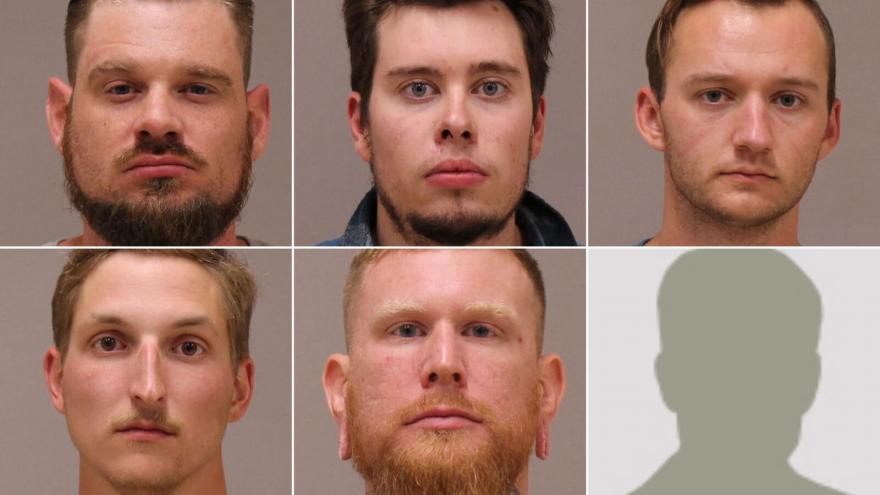 CNN has obtained the mugshots for 5 of the 6 suspects indicted by federal officials for plotting to kidnap the Governor of Michigan. They were held at the Kent County jail facilities prior to their arraignment.

US Magistrate Judge Sally Berens said that there was ample evidence of probable cause and bound them over for trial.

He testified that he heard discussion of the plot to kidnap Whitmer before President Donald Trump's tweet in mid-April saying "LIBERATE MICHIGAN!"

Springstead, as he questioned Trask, said his client felt he didn't need to storm the Capitol because he believed the state government would "collapse on its own." The attorney mentioned multiple plots the group discussed that he said never materialized into anything.

Assistant US Attorney Nils Kessler said the men had crossed a line.

"They were definitely taking it seriously. They didn't just surveil (the governor's homes) once," he said.

Authorities have said the men were planning to kidnap the governor from a vacation home and blow up a bridge to delay law enforcement, but they were arrested first.

According to Nieuwenhuis, Fox wasn't present for a meeting where an informant recorded conversations in which he referred to Fox's beliefs, saying "He is all about killing (the governor)."

The attorney said Fox did not say that.

Friday morning's proceeding was a continuation of a preliminary and bond hearing from earlier this week.

Fox waived his right to a bond hearing while Garbin was denied bail.

It was unclear whether Harris, Caserta and Franks were in court for the hearing.

A sixth defendant, Barry Croft, is awaiting extradition from Delaware to Michigan.

Total of 14 people charged so far

Eight people have been charged with state offenses, according to the Michigan attorney general's office.

Brian Higgins, 51, of Wisconsin Dells, Wisconsin, has been charged with material support of an act of terrorism for his "alleged participation in a plan of domestic terrorism that included storming the Michigan Capitol building and harming government officials," Attorney General Dana Nessel's office said in a Thursday news release.

Seven other people, all associated with the extremist group Wolverine Watchmen, were charged by the state of Michigan last week.

"While the political rhetoric in our nation may at times be divisive, I am encouraged by the united front our law enforcement community has displayed in response to this indescribable act of terror," Nessel said.

"These were very credible and very serious threats to our elected officials and the public in general, and the swift actions taken by state and federal authorities this past week are nothing short of heroic," she said.

Higgins has been charged with "material support or resources to a terrorist organization," according to the arrest warrant.

Higgins is thought to have "provided material support and resources in the furtherance of terrorist acts," according to the affidavit.

Higgins provided his night-vision goggles for surveillance of Whitmer's vacation home and used a dash camera in his vehicle to record the surveillance "to aid in kidnapping plans," the affidavit said.

Those charged in Michigan last week are suspected of attempting to identify the addresses of law enforcement officers "in order to target them," Nessel said after those arrests.

They "made threats of violence intended to instigate a civil war, and engaged in planning and training for an operation to attack the capitol building of Michigan and to kidnap government officials, including the governor of Michigan," Nessel said.

CNN is trying to determine whether Higgins has an attorney.

Higgins and seven other individuals were charged with a total of 20 state felony charges filed by Nessel.

If convicted, Higgins faces up to 20 years in jail for the act of terrorism charge.

Higgins was arrested in Wisconsin on Thursday and will be extradited to Michigan, according to the news release.