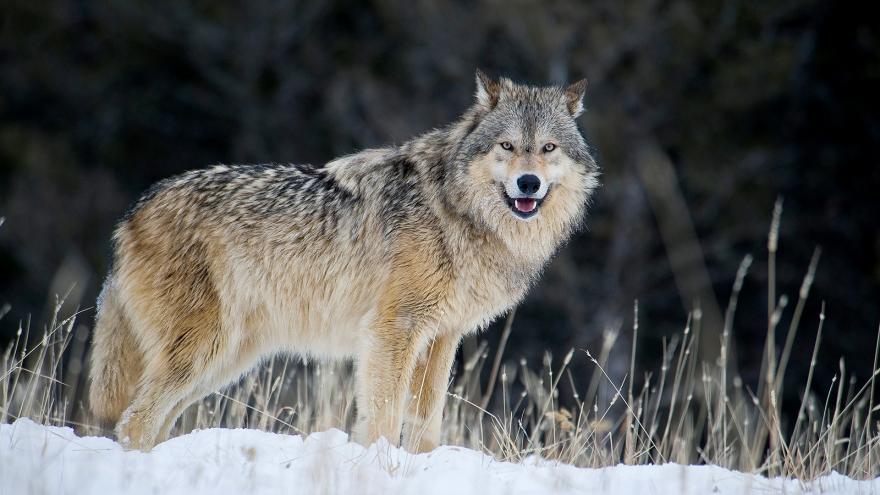 (CNN) -- A federal judge reversed a Trump administration decision that removed the gray wolf from the endangered species list in the continental United States after a coalition of wildlife organizations argued the move seriously threatened the animal's population.

On Thursday, US District Judge Jeffrey S. White in Northern California ruled in favor of a lawsuit brought by the Humane Society of the United States and other wildlife organizations against the US Department of the Interior in January 2021.

The US Fish and Wildlife Service (USFWS) "failed to adequately analyze and consider the impacts of partial delisting and of historical range loss on the already-listed species," White wrote in his decision, which restored gray wolf protections in 45 states.

The lawsuit claimed the USFWS did not take proper consideration when it stripped the animal of Endangered Species Act (ESA) protections, which went into effect in January 2021, under the assumption its population sufficiently recovered.

"Today is a monumental victory for wolves who will now be protected from state-sponsored bloodbaths," Kitty Block, president and CEO of the Humane Society, said in a statement.

"After having yet another wolf delisting overturned in federal court, the US Fish and Wildlife Service should finally learn its lesson," she added. "Instead of continuing to devise convoluted excuses to strip these beloved animals of legal protections, the agency must develop a plan for meaningful recovery across the species' range and ensure that states will not decimate their wolf populations."

The federal government has 60 days to appeal the court's decision.

Only the Northern Rockies population of wolves remains unprotected as a result of laws that passed in Idaho and Montana, according to the Humane Society, but the USFWS is currently considering relisting them to the act.

After the species were stripped of federal protections, Wisconsin hunters killed more than 215 wolves in under three days as part of a February 2021 trophy hunting season, exceeding the state's quote by nearly double, according to the Humane Society.

The gray wolf received protection from the ESA in the 1970s, when the population dwindled due to declines in their populations and frequent conflict with farmers and ranchers.

Certain wolf populations on the West Coast and in the Southern Rocky Mountains are especially vulnerable and were at risk of "disappearing forever" as a result of the Trump-era decision, the Humane Society said in a statement when the lawsuit was filed.

"Our lawsuit argues that by treating the plight of these fragile populations as insignificant and ignoring the natural and manmade threats that wolves nationwide still face, the government is in violation of the Endangered Species Act and its legal duty of protecting wolves and helping them recover," the statement read.

Michigan Attorney General Dana Nessel, who took part in an amicus brief in the coalition's lawsuit, said her state is home to roughly 700 gray wolves.

"These magnificent animals serve important roles in our Great Lakes ecosystems, and they show us that dedication to family is not unique to humans," Nessel said in a statement.

Some hunter advocacy groups rejected the decision, however, arguing it will affect predator management programs that aim to reduce predation.

"We are disappointed that an activist judge from California decided to tell farmers, ranchers, and anyone who supports a balanced ecosystem with common-sense predator management that he knows better than them," said Hunter Nation President and CEO Luke Hilgemann in a statement.

"At Hunter Nation, we prefer to trust local experts and conservation and hunting partners to come up with predator management programs that make sense for them rather than putting our faith in bureaucrats who don't spend time in the woods or never have to deal with the negative consequences of an uncontrolled wolf population."