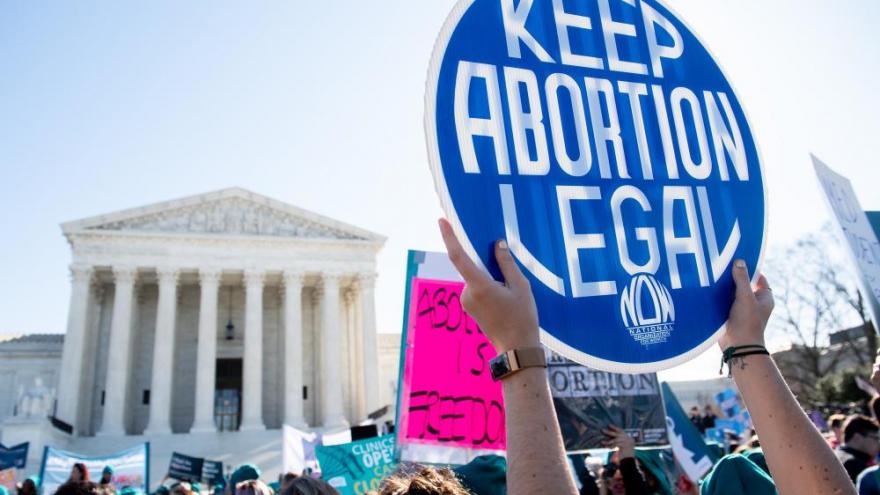 A federal judge on Friday blocked a new federal regulation that would have required insurers on the Obamacare exchanges that cover abortions to issue separate bills for that coverage.

(CNN) -- A federal judge on Friday blocked a new federal regulation that would have required insurers on the Obamacare exchanges that cover abortions to issue separate bills for that coverage.

The decision marks a setback in the Trump administration's long-standing efforts to limit abortion access through federal programs. Planned Parenthood of Maryland and several individuals who buy health insurance on their states' exchanges filed the lawsuit in February, with lawyers from Planned Parenthood Federation of America and the American Civil Liberties Union Foundation representing plaintiffs.

US District Judge Catherine Blake in Maryland found that the rule from the Centers for Medicare & Medicaid Services (CMS) ran afoul of a section of the Affordable Care Act barring "unreasonable barriers" to health care, since "it makes it harder for consumers to pay for insurance because they must now keep track of two separate bills."

The insured individuals who helped bring the suit "are in danger of losing non-Hyde abortion coverage if states allow issuers to drop the coverage and if issuers decide that the 'separate billing' rule is too burdensome," Blake wrote.

Because of the Hyde Amendment, which dates back to 1976, federal funds are already barred from being used for abortions except in cases of rape, incest or to save the woman's life. Under existing Affordable Care Act regulations, participating insurers may cover abortions, but enrollees' payments for those services cannot be covered by federal funds and must be held in "a separate account that consists solely of such payments."

The Department of Health and Human Services, CMS' parent agency, unveiled the new rule in December 2019, asserting that it "better aligns with Congress' intent for (participating insurers) to collect two distinct payments, one for the coverage of (relevant) abortion services, and one for coverage of all other services covered." The rule had originally been slated to go into effect on June 27, but CMS extended the deadline by 60 days to August 26 in light of the coronavirus pandemic.

Blake found that the rule's potential alignment with Congress' intent "appears to be minimal," noting that the ACA "does not specify a method of compliance" between the differentiated payments.

"The record indicates that the rule is likely to cause enrollee confusion and may lead to some enrollees losing health insurance," Blake said, adding that "even if enrollees are not confused, they will still have to spend extra time reading, understanding, and paying two separate bills each month (or arranging through autopay for the two bills to be paid)."

An HHS spokesperson told CNN that the department is reviewing the opinion.

Jennifer Popik -- legislative director for the National Right to Life Committee, the largest anti-abortion group in the country -- said in a statement that the group was "disappointed" in the decision, calling the current ACA separation standard "a bookkeeping gimmick."

"The Trump administration regulations simply aim to enforce the minimal requirements included in the plain language of the statute," Popik added. "Americans should know if and when they are paying for abortion coverage, and have the ability to see what that coverage costs."

Opponents of the rule, however, cheered Friday's decision as safeguarding health care access.

"Today is a huge victory for the people who need and deserve access to safe, legal abortion," Alexis McGill Johnson, president and CEO of Planned Parenthood, said in a statement. "Abortion is essential health care, and this rule was an obvious attempt by the Trump administration to put it out of reach for millions of people in the country."

Margaret Murray -- CEO of the Association for Community Affiliated Plans, a trade association for 60 Medicaid-focused health care plans -- called the decision "a major win for access to care," as the rule would have led "plans to drop coverage for abortion services, even if their enrollees desire such coverage."

"As the COVID-19 pandemic continues to threaten Americans and our health care system we urge HHS to implement policies that promote access to care, not wrap coverage in red tape," she added.

In November 2019, a federal judge struck down the department's so-called conscience rule, which permits health care workers who cite moral or religious objections to opt out of providing certain medical procedures, such as abortion, sterilization and assisted suicide.

But the 9th US Circuit Court of Appeals ruled in July 2019 that the department's regulations prohibiting taxpayer-funded family planning clinics from referring patients for abortions could go into effect despite a pending legal challenge against them.