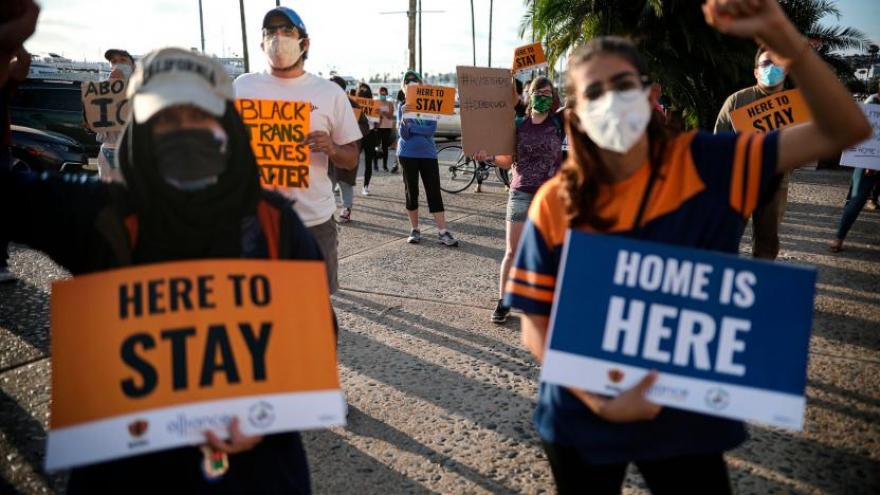 A Texas federal judge ruled that Deferred Action for Childhood Arrivals, the Obama-era program shielding certain undocumented immigrants from deportation, is illegal and blocked new applicants. Pictured, people at a rally in June 2020.

(CNN) -- A federal judge in Texas on Friday ruled that Deferred Action for Childhood Arrivals, the Obama-era program shielding certain undocumented immigrants from deportation, is illegal and blocked new applicants.

The ruling from Judge Andrew Hanen would bar future applications. It does not immediately cancel current permits for hundreds of thousands of people -- though it once again leaves them in devastating legal limbo and is a reminder of the uncertainty they face.

DACA, created in 2012, was intended to provide temporary reprieve to undocumented immigrants who were brought to the United States as children -- a group often described as "Dreamers" -- many of whom are now adults.

But almost a decade since the program was established, DACA is still one of the only signs of potential relief for undocumented immigrants looking to remain and work in the US.

Hanen, an appointee of President George W. Bush, ruled that Congress had not granted the Department of Homeland Security the authority to create DACA and that it prevented immigration officials from enforcing removal provisions of the Immigration and Nationality Act.

"Congress has not granted the Executive Branch free rein to grant lawful presence outside the ambit of the statutory scheme," Hanen wrote.

But he noted that DACA is part of the current American fabric.

"Hundreds of thousands of individual DACA recipients, along with their employers, states, and loved ones, have come to rely on the DACA program," Hanen wrote in a separate ruling Friday night. "Given those interests, it is not equitable for a government program that has engendered such a significant reliance to terminate suddenly."

President Joe Biden on Saturday called the ruling "deeply disappointing" and said the US Department of Justice intends to appeal the decision.

"Yesterday's Federal court ruling is deeply disappointing. While the court's order does not now affect current DACA recipients, this decision nonetheless relegates hundreds of thousands of young immigrants to an uncertain future," Biden said in statement.

Secretary of Homeland Security Alejandro Mayorkas said Saturday that his department will "engage the public in a rulemaking process to preserve and fortify DACA," as well as "continue processing DACA renewal requests, consistent with the ruling," but he called on members of Congress to act.

"I urge Congress to act swiftly to enact legislation through the reconciliation process to provide permanent protection that the American people want and Dreamers have earned," he said in a statement.

Congress remains the only body that can provide a permanent solution for DACA recipients through legislation, but immigration legislation has been stalled for years and Democrats immediately called for action given Friday's order.

"As we await the swift stay that the law clearly requires, Democrats will continue to press for any and all paths to ensure that the Dream and Promise Act, now passed twice by the House, becomes the law of the land," House Speaker Nancy Pelosi said in a statement Friday. "Democrats call on Republicans in Congress to join us in respecting the will of the American people and the law, to ensure that Dreamers have a permanent path to citizenship," Pelosi said, calling Dreamers the "pride of our nation."

"For more than nine years, DREAMers have watched courts and politicians debate whether they'll be allowed to stay in the only country many of them have ever known," former President Barack Obama said on Twitter on Saturday. "It's long past time for Congress to act and give them the protection and certainty they deserve."

Rep. Joaquin Castro, a Texas Democrat, and his twin brother Julian Castro, who served as secretary of Housing and Urban Development under Obama, called the decision "terrible."

"The dreams of hundreds of thousands of young people who are contributing to the American economy will be put on hold for no good reason. Congress must pass a pathway to citizenship this year. We can't wait," Joaquin Castro said on Twitter.

"Dreamers have lived in uncertainty for far too long. It's time Congress give them the protections they deserve. We must pass the budget reconciliation bill," Julián Castro said.

Meanwhile, New Jersey Rep. Bill Pascrell said on Twitter, "This rightwing hack judge in Texas is trying to unilaterally stop the DACA program. This decision must be appealed and tossed out."

And New Jersey Sen. Bob Menendez said on Twitter that while the decision is "not a surprise," it is "a painful reminder that we need to stop relying on temporary immigration fixes."

"Congress must seize the moment and any and all opportunities to finally provide a pathway to legalization for millions of undocumented immigrants," he said.

Sen. Catherine Cortez Masto, the first Latina senator, called for the ruling to be overturned and said she'd continue fighting in Congress for "permanent relief" for Dreamers.

"The U.S. is the only home that Dreamers have ever known, and they should not be forced to live in fear of deportation. DACA empowered undocumented youth to come out of the shadows and contribute to our communities in immeasurable ways -- from serving in our military to being on the front lines of the coronavirus pandemic," the Nevada Democrat said in a statement.

The Trump administration tried ending DACA in 2017, but the US Supreme Court blocked its attempt in June 2020.

After the Supreme Court ruling, the Trump administration then tried to say no new DACA applications would be accepted and renewals would be limited to one year instead of two amid an ongoing review. A separate federal judge rejected that and ordered the restoration of the program.

The lawsuit was originally brought by Texas -- along with Alabama, Arkansas, Louisiana, Nebraska, South Carolina and West Virginia -- which argued that the program placed an undue burden on the states and amounted to executive overreach. Hanen heard oral arguments in the case in December.

In his ruling Friday, Hanen cited the earlier Supreme Court decision, pointing to the majority's determination that courts have the authority to review the DACA memorandum. But Hanen also drew from a dissent written by Justice Clarence Thomas, joined by Justices Samuel Alito and Neil Gorsuch, that said DACA was an "unlawful program."

"Justice Thomas noted that the majority's failure to address DACA's creation was 'an effort to avoid a politically controversially but legally correct decision' that would result in future 'battles to be fought in this Court,'" Hanen wrote. "While the controversial issue may ultimately return to the Supreme Court, the battle Justice Thomas predicted currently resides here and it is not one this Court can avoid."