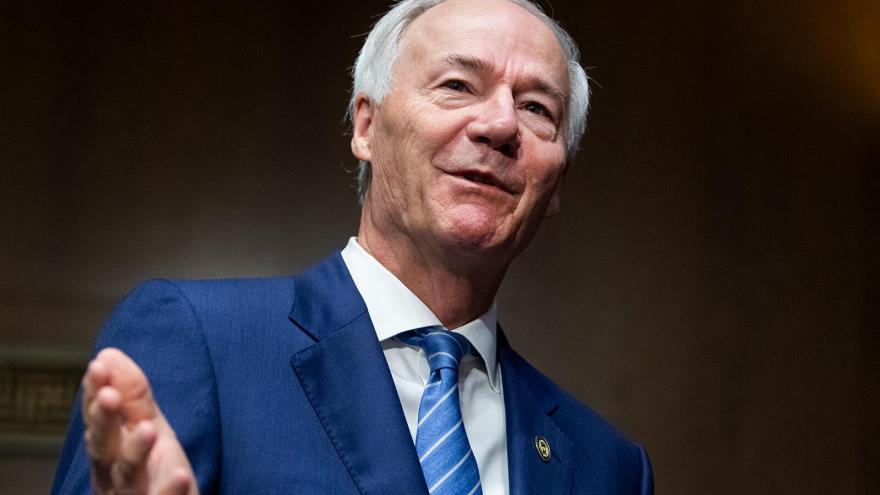 US District Judge Kristine G. Baker on July 20 temporarily blocked an Arkansas ban on nearly all abortions from going into effect while a lawsuit against the measure proceeds, an early victory for abortion rights supporters as many of the restrictions that advanced in states this spring are expected to make their way to the courts.

(CNN) -- US District Judge Kristine G. Baker on Tuesday temporarily blocked an Arkansas ban on nearly all abortions from going into effect while a lawsuit against the measure proceeds, an early victory for abortion rights supporters as many of the restrictions that advanced in states this spring are expected to make their way to the courts.

The new Arkansas law would ban providers from performing abortions "except to save the life of a pregnant woman in a medical emergency" and makes no exceptions for instances of rape, incest or fetal anomalies. Those found to violate the law could face fines of up to $100,000 and up to 10 years in prison.

Republican Arkansas Gov. Asa Hutchinson signed the bill into law in March and has been blunt about its goal of overhauling abortion rights. He told CNN's Dana Bash on "State of the Union" later that month, "I signed it because it is a direct challenge to Roe v. Wade," the 1973 Supreme Court ruling that legalized the procedure nationally.

"Arkansas pursued a clearly unconstitutional law that would disproportionately harm people of color, people who live in rural areas, and people with low incomes — all of whom already face significant barriers to accessing health care and higher risks of pregnancy-related death," said Meagan Burrows, staff attorney at the ACLU Reproductive Freedom Project. "The court's ruling today should serve as a stark reminder to anti-abortion politicians in Arkansas and other states that they cannot strip people of their right to make the deeply personal decision about whether to have an abortion or continue a pregnancy. We'll continue to fight to make sure abortion stays legal in Arkansas and that the state's unconstitutional ban is struck down for good."

"The Attorney General is disappointed in today's decision by Judge Baker," spokeswoman Stephanie Sharp said. "She will be reviewing it to consider the appropriate next step to protect the life of the unborn."

More litigation is expected in light of the wave of abortion restrictions coming out of conservative state legislatures this year. So far in 2021, South Carolina, Oklahoma, Idaho and Texas have codified bans on abortion at the onset of a fetal heartbeat, Arkansas and Oklahoma have enacted near-total abortion bans, and Montana banned the procedure at 20 weeks. None of the bills has gone into effect, either because of court actions or later effective dates.

The ACLU, the ACLU of Arkansas, Planned Parenthood Federation of American and several abortion providers had filed the lawsuit against the new Arkansas law in May, citing Rutledge's opinion that it was expected to go into effect on July 28.

The law "is just as unconstitutional as all of the other pre-viability abortion bans struck down before it," the ACLU wrote, pointing to Hutchinson's comments on CNN.

"This will inflict immediate and irreparable harm upon Plaintiffs' patients by blatantly violating their constitutional rights under the Fourteenth Amendment to the United States Constitution, threatening their health and well-being, and forcing them to continue their pregnancies against their will," they added.

The legal challenge and temporary block of the Arkansas law also come after the US Supreme Court agreed to take up a key abortion case next term concerning a controversial Mississippi law that would ban most abortions after 15 weeks, rekindling a potentially major challenge to Roe v. Wade at the majority conservative court.

Burrows acknowledged during an interview with CNN before the measure was blocked that the judge might hold off on deciding on whether to permanently block the Arkansas law until the Supreme Court issues a ruling on the Mississippi ban, most likely next year.

"This is kind of the moment that states like Arkansas, and anti-abortion politicians in those states, have been waiting for," she said. "But as it stands right now, Roe v. Wade and its bright line rule that states cannot outright prohibit abortion prior to viability is still the law of the land. And all lower courts -- both district courts and courts of appeals -- are bound by that unless and until the Supreme Court changes course."