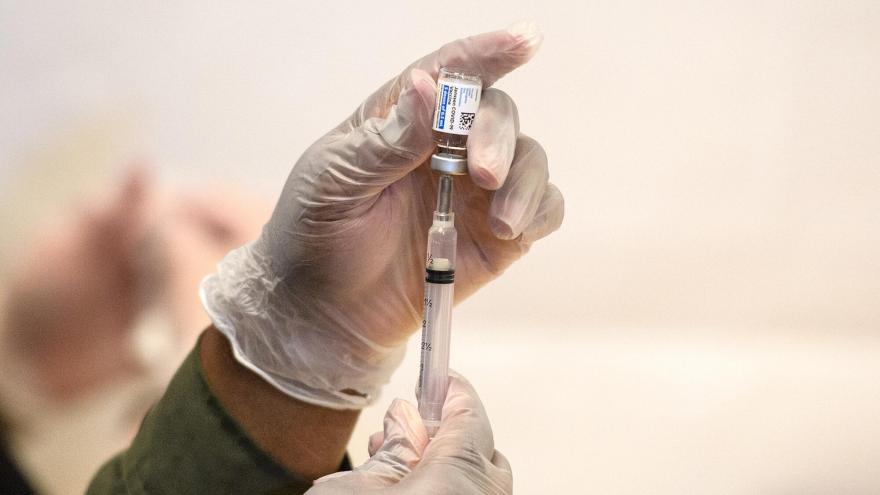 A federal judge has temporarily allowed health care workers in New York to apply for religious exemptions to the state's Covid-19 vaccine mandate, according to an order. A healthcare worker is shown here preparing a syringe with a vial of the J&J/Janssen Covid-19 vaccine at a temporary vaccination site at Grand Central Terminal train station on May 12, 202 in New York City.

(CNN) -- A federal judge has temporarily allowed health care workers in New York to apply for religious exemptions to the state's Covid-19 vaccine mandate, according to an order.

US District Judge David Hurd made the ruling on Tuesday, granting a preliminary injunction that allows health care workers to apply for religious exemptions considered by their employers.

Hurd stated that the state Department of Health is "barred from interfering in any way with the granting of religious exemptions from Covid-19 vaccination going forward, or with the operation of exemptions already granted."

Hurd also barred the Department of Health from taking disciplinary or other action on licenses, certifications, residency, or other professional status for those health care workers who have sought or obtained religious exemptions.

Last month, 17 health care workers, many of them unnamed doctors, residents and nurses, filed a lawsuit objecting to the New York State Department of Health's vaccine mandate, which didn't allow for religious exemptions. The judge issued a temporary restraining order on Sept. 14 related to the religious exemptions.

New York state had issued a rule requiring all health care workers to be vaccinated against Covid-19 by September 27. At the time of the deadline, about 92% of hospital staff statewide had been vaccinated.

New York Gov. Kathy Hochul said in a statement she stood by the vaccine mandate.

"My responsibility as Governor is to protect the people of this state, and requiring health care workers to get vaccinated accomplishes that," she said in a statement. "I stand behind this mandate, and I will fight this decision in court to keep New Yorkers safe."

Meanwhile, Christopher Ferrara, the lead counsel for plaintiffs in the case and the Thomas More Society Special Counsel, praised the judge's ruling in a statement.

"With this decision the court rightly recognized that yesterday's 'front line heroes' in dealing with Covid cannot suddenly be treated as disease-carrying villains and kicked to the curb by the command of a state health bureaucracy," he said.

CNN has reached out to the New York Department of Health and the New York Attorney General's Office, who were all named as defendants in the suit, for comment.

The health care workers protesting the vaccine mandate did so because they objected to being forced to take vaccines that used "fetal cell lines" from "procured abortions."

A New York State health official confirmed in an affidavit as part of this case that fetal cell lines were used in the testing and production of current Covid-19 vaccines, according to the judge's order.

"In sum, while none of the FDA approved Covid-19 vaccines contain any fetal cells, fetal cell lines were only 'used in testing during research and development of the mRNA vaccines [Moderna or Pzifer], and during production of the Johnson and Johnson [Janssen] Vaccine,'" an affidavit from Dr. Elizabeth Rausch-Phung, medical director of the Bureau of Immunization at the New York State Department of Health, reads.

Even so, the Vatican has said it is "morally acceptable to receive Covid-19 vaccines that have used cell lines from aborted fetuses in their research and production process."

The state entities who were sued argued that their vaccine mandate for health care workers was necessary to control the continued spread of Covid-19, including the Delta variant.

The preliminary injunction was granted as a temporary measure to allow the plaintiffs to continue to argue their cases. Hurd said the question is not whether the plaintiffs are entitled to religious exemptions but whether the state's vaccine mandate conflicts with the plaintiffs' "federally protected right to seek a religious accommodation" from their employers.