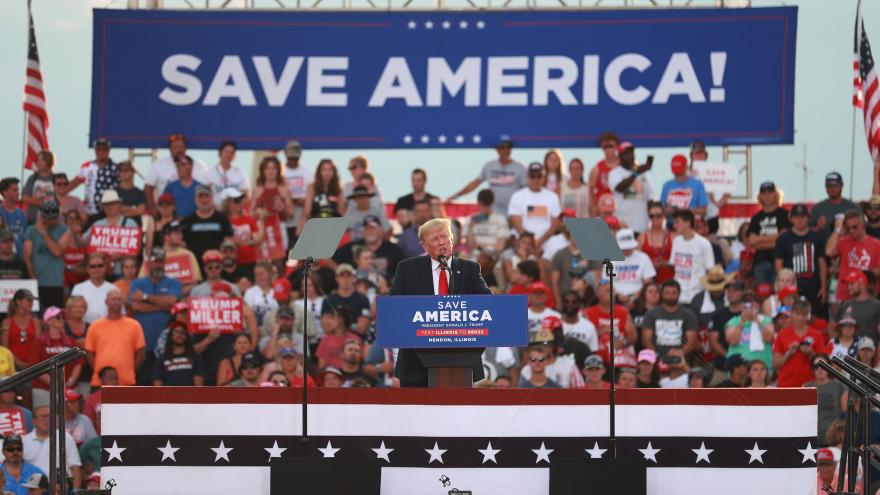 (CNN) -- A federal grand jury is examining one of former President Donald Trump's main political and fundraising vehicles, the Save America leadership PAC, in an expansion of the criminal investigation into the events surrounding the US Capitol attack on January 6, 2021.

Federal prosecutors issued several subpoenas to former Trump administration officials, former campaign and communications aides and people currently advising Trump or Save America. William Russell, a senior adviser to Trump, was the recipient of one of the subpoenas on Wednesday.

According to multiple sources familiar with the subpoenas, which were issued by a grand jury in Washington, DC, the Justice Department is seeking information related to the formation, fundraising and expenditures of Save America, which has amassed more than $100 million in contributions since it was formed in November 2020.

According to one source familiar with the language in the subpoenas, investigators may be looking into whether people associated with the Save America PAC defrauded people out of money using claims they knew to be false about the 2020 election being stolen.

Some of the subpoenas also requested any information that recipients previously turned over to the House select committee investigating the January 6 Capitol riot and communications recipients may have had with a broad list of people who worked to overturn the 2020 election results -- including former Trump lawyers Rudy Giuliani and Victoria Toensing and Boris Epshteyn, an adviser to Trump's 2020 campaign, among others. According to two subpoenas described to CNN, that included communications with a list of people from various states.

The DOJ's investigation, already the largest in the department's history, has expanded beyond the hundreds of rioters charged in connection with their actions that day. More recently, investigators have looked at efforts by Trump and allies to overturn the 2020 election results, including efforts to put forth slates of fake electors.

Separately, the House committee dedicated an entire investigative team to examine the fundraising efforts by the Trump campaign after the 2020 election. And during a hearing in June, the committee tried to make the case that the Trump campaign raised funds by falsely claiming the election was stolen, even though they knew it wasn't, and that the funds may have been misused.

"Throughout the committee's investigation, we found evidence that the Trump campaign and its surrogates misled donors as to where their funds would go and what they would be used for," Rep. Zoe Lofgren, a Democrat on the committee, said during the hearing. "So, not only was there the big lie, there was the big rip-off. Donors deserve to know where their funds are really going. They deserve better than what President Trump and his team did."

In an interview with CNN after the hearing, Lofgren said the committee found evidence that Kimberly Guilfoyle, a former member of Trump's 2020 presidential campaign, was paid a $60,000 speaking fee for introducing Donald Trump Jr., her fiancé, at the "Stop the Steal" rally on the Ellipse that preceded the US Capitol riot.

Lofgren would not say at the time, however, whether she believed that a financial crime had been committed.

"I'm not saying it's a crime, but I think it's a grift," Lofgren said.

Senior investigative counsel for the committee, Amanda Wick, said in a video presentation during the June hearing that the committee found Trump and his allies raised $250 million from false election fraud claims. The committee said that most of the money raised in this period went to the Save America PAC, not to election-related litigation.

"Save America PAC made millions of dollars of contributions to pro-Trump organizations, including $1 million to Trump Chief of Staff Mark Meadow's charitable foundation, $1 million to the America First Policy Institute, a conservative organization, which employs several former Trump administration officials, $204,857 to the Trump Hotel Collection, and over $5 million to Event Strategies Inc, the company that ran President Trump's January 6 rally on the ellipse," Wick said.

The committee declined to comment on the DOJ's investigation.