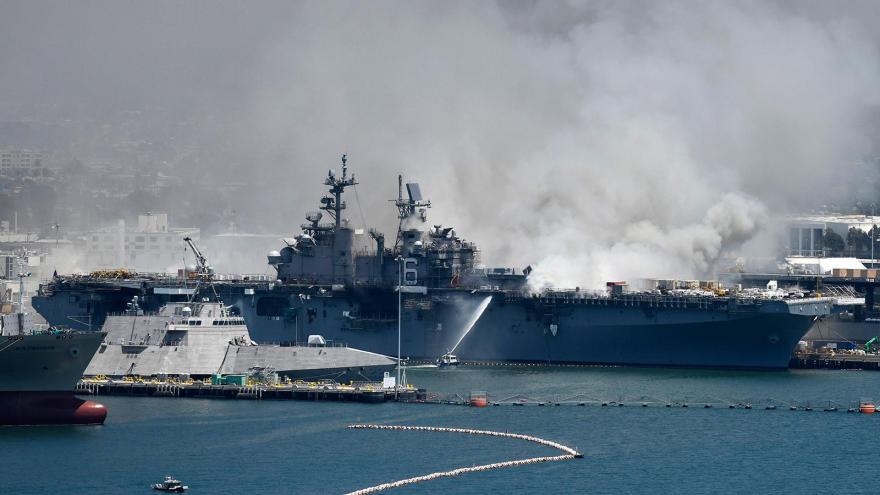 Federal firefighters continue to battle the blaze aboard the Navy ship.

A total of 59 personnel, 36 sailors and 23 civilians, were treated for minor injuries, including heat exhaustion and smoke inhalation, the US Pacific Fleet's media operations center said. All who were hospitalized have been released.

The priority now is to extinguish the fire, said Rear Adm. Philip Sobeck, commander of Expeditionary Strike Group Three, at a press conference. But he did not give an estimate for how long it would take to put it out.

The ship's superstructure and upper decks have sustained damage and the forward mast has collapsed, Sobeck said. There was an explosion shortly after the fire began.

The ship is listing but Sobeck said sailors and firefighters are removing water to make sure the ship does not list further.

The ship does have fuel on board, but Sobeck said there are roughly two decks between the fuel and a heat source, and firefighters are working to maintain a buffer between the two.

He described the battle against the fire as "a very dynamic situation" with temperatures ranging as high as 1,000 degrees.

San Diego Fire Chief Colin Stowell told CNN's Erica Hill that the ship could burn for days "down to the waterline."

Asked about Stowell's comment, Sobeck said, "For the last 24 hours, 400 sailors have been on board that ship to make sure that we make every effort to save that ship."

The Navy's Helicopter Sea Combat Squadron Three is assisting the firefighting efforts by dropping water on the fire and the ship to keep it cool. So far, the squadron's MH-60 Sea Hawk helicopters have dropped 415 buckets of water on the ship, said squadron commander Capt. Will Eastham.

There were 160 people on board when the blaze started on Sunday. Sailors were responding to the fire when there was an internal explosion around 8:30 a.m. Sunday, Sobeck said.

Everyone on board was accounted for, Sobeck told reporters late Sunday. The ship, which has a crew of 1,000, was in the shipyard for maintenance.

Stowell said "as soon as the personnel started getting off the ship, there was an explosion."

"The Navy is the only one that will work from the pier side as well as the harbor PD on the fire boats, working from the water side to contain the heat of it," according to Stowell.

As of 3:30 p.m. Monday, firefighters were still at work, according to a Naval Surface Forces tweet.

Flames were being fueled by office supplies and other items from the lower vehicle storage area where the fire started, Sobeck said.

While investigators know where the fire started, they have not yet determined the cause of the fire. There was a report of an internal explosion caused by over-pressurization, Sobeck said.

The Halon system, a type of fire suppression system using halon gas, was not in operation when the fire broke out because the ship was undergoing maintenance, Sobeck said.

Due to the amount of shipyard work being done, the large storage area where it's believed the fire started was being used to store dry walls, supplies and heavy duty cardboard boxes.

"That's what I think ignited and started the fire," said Sobeck.

A shelter in place was ordered for all non-responding personnel at the base to maintain an 1,800-yard safety perimeter as the firefight continues, Sobeck said.

Two other naval ships, the USS Fitzgerald and the USS Russell, had to move farther away because they were threatened by the burning Bonhomme Richard, a media update from the Navy said.

Despite the damage, the ship has endured in the fire.

"We're absolutely going to make sure it sails again," Sobeck said, "Right now we're going to fight the fire and then we'll work on understanding what exactly happened to make sure she sails as best as possible in a very near time."

The Bonhomme Richard is an amphibious assault ship designed to support Marine Corps operations. The ship can transport Marines and equipment of a Marine Expeditionary Unit and land them in hostile territory via landing craft or helicopters as well as provide air support by helicopters or attack aircraft.