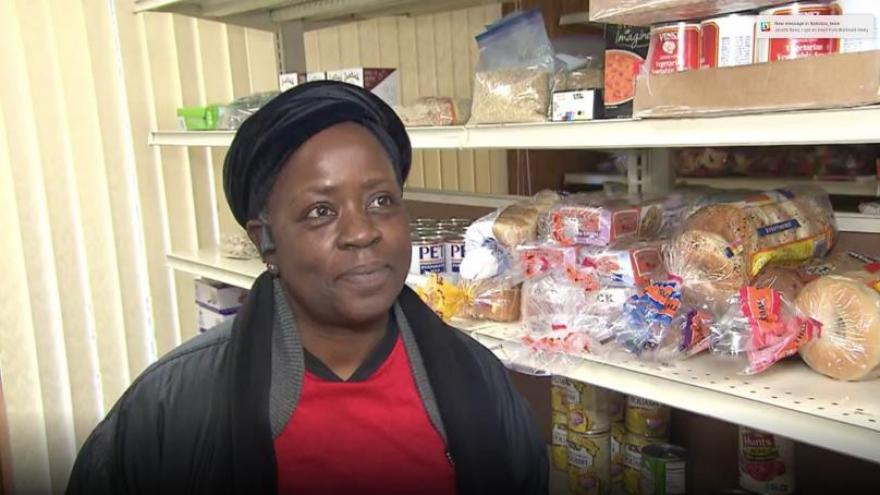 (CNN) -- Adrienne Walker, a TSA employee in Atlanta, said her pantry is stocked, even though she has been working without pay during the partial government shutdown. But she knows her colleagues with children need groceries more than she does.

Walker hoped the box of produce, canned goods and other groceries she left a Georgia food pantry with on Wednesday would help fellow employees at Hartsfield-Jackson Atlanta International Airport. Walker, a board member of the union representing Georgia's TSA employees, said she was willing to give employees rides to the food pantry in Conyers.

With the shutdown in its fourth week, furloughed federal employees struggling to cope with life without a paycheck are turning to food banks and food pantries to feed their families, according to several organizations across the country.

Calls from anxious workers have poured into agencies, and some of them are bracing for what they expect will be an increased demand for food at a time when donations are typically low. Some organizations are already seeing a spike.

Over the past two weeks, more than 280 federal employees have used a food bank that Catholic Community Services of Northern Utah operates, which is a 50% increase over the 566 regular clients who used services during that time, according to the organization's director, Maresha Bosgieter.

"We might have to make the amount of the food baskets smaller if it continues, but our doors will stay open," said Deborah Nielsen, the programs coordinator and case manager.

Most of the federal employees who used the Joyce Hansen Hall Food Bank, which is open four days a week, work for the Internal Revenue Service, Bosgieter said.

Last weekend in the Washington area, more than 2,400 people showed up at five pop-up markets for out-of-work federal employees and contractors. The attendance was more than double the amount of expected attendance at the markets organized by Capital Area Food Bank.

Most of the food was done early, said the group's president and CEO Radha Muthiah.

The idea for the pop-ups came after the food bank saw a surge in calls from furloughed government workers, contractors and others to a helpline in the past two weeks, said Muthiah, whose organization partners with more than 400 groups in Washington, D.C., Maryland and Virginia.

Muthiah said more than 50 calls a day from furloughed employees, contractors and others poured in to the food bank's Hunger Lifeline, which offers resources such as locations of nearby food pantries, over the past two weeks. That's a roughly a 15 to 20% increase in the call volume over the same time last year, Muthiah said.

In the past few weeks, the organization has noticed people calling the hotline who have never called a food bank before, seeking guidance.

Muthiah said one woman who attended the pop-up market said she had held food drives for a nonprofit and never imagined she would have to rely on a food bank.

"I think, there's just a little bit of shock and surprise that they're in these circumstances," Muthiah said.

Muthiah recalled another furloughed worker wanted to work for her food and volunteered to pack produce at the food bank.

"I felt like I should do something to earn it," she recalled the woman saying.

Based on the increased call volume to the hotline and attendance at the pop-up markets, the organization said it anticipates it will have to provide up to 600,000 more meals -- a 20% increase -- specifically for federal workers and contractors this month, she said.

"Food is fundamental, and we hope that a resolution can come about sooner rather than later so people can go on with their lives," Muthiah said.

'We will do very best we can'

Linda Alexander, operations director of the Three Angels Food Network in Conyers, said they expect more federal employees to seek their services this week. About 30 out-of-work federal employees called the food pantry for help over the past several days, which is unusual, Alexander said.

"They're saying 'I'm going to need some help this week with making sure my kids get fed,'" Alexander said.

She said the nonprofit is trying to prepare for the increased demand.

"We have donations available based on our trending data, and this is an anomaly," Alexander said. "We are attempting to source food from other distributors that we usually deal with because we anticipate .... this need is going to manifest itself in a real way. It's going to affect us."

She added: "We will do the very best that we can. We believe that we can marshal some additional resources."

Walker, the secretary-treasurer of the American Federation of Government Employees local union, said she has worked without pay since late December, like many of her colleagues. She has cut out spending money and reached out to her mortgage company and creditors asking them to work with her.

She went to Three Angels Food Network to pick up goods and get information for union members at the request of her local president.

She hasn't reached her breaking point, but said she would turn to the food pantry for help. "I'm not too proud. Everything in there I could use," Walker, 57, said.

Help from all corners

From large to small efforts, others have also stepped up to feed employees affected by the shutdown.

Andrés and his nonprofit served millions of free meals after natural disasters, including Hurricane Maria and the California wildfires.

The Central Pennsylvania Food Bank, which distributes millions of food and groceries every year to more than 900 soup kitchens, shelters and food pantries, started a federal shutdown food assistance program to serve 25,000 federal employees, according to Feeding America, a hunger relief organization.

Kraft said it planned to open a pop-up grocery store in Washington DC on Wednesday to support a program aimed at helping federal workers during the shutdown.

At some food pantries, furloughed workers have left with more than just food, but direction and peace.

Nielsen said she has encouraged federal workers who come its pantry to also apply for unemployment and work out a plan with their creditors.

On Tuesday, she gave two inflatable toboggans shaped like bears to two government workers who came with their children.

"This will give us something to do during the shutdown and get our minds off it," she recalled them saying.