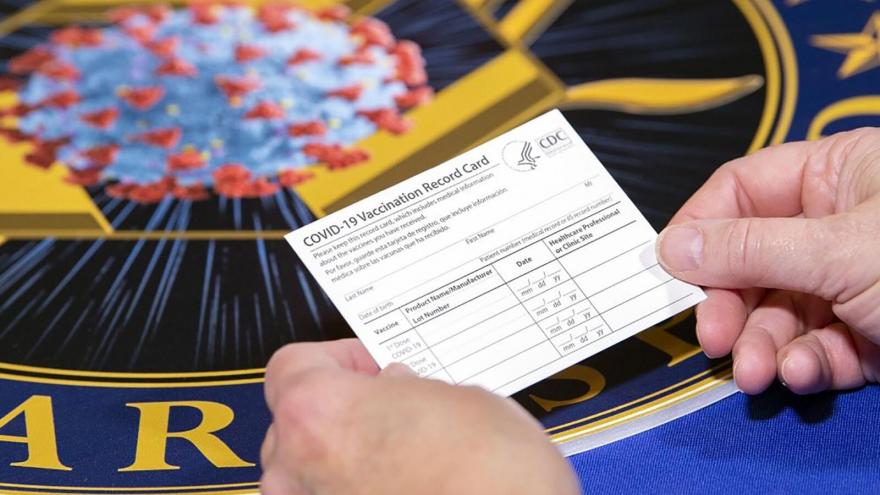 A Department of Health and Human Services employee holds a COVID-19 vaccine record card Nov. 13. The cards will be sent out as part of vaccination kits from Operation Warp Speed.

(CNN) -- As Operation Warp Speed prepares to give the first Americans the coronavirus vaccine, states are set to turn over varying levels of non-identifiable information about vaccine recipients in order to help the federal government track the effort to eradicate the virus.

But not all states have been willing to hand over their data blanketly. Plans for a new database to manage that information, which OWS laid out last week, have raised privacy concerns and led to fears that it could actually discourage Americans from getting vaccinated.

The issue of data-sharing turned into a standoff between federal agencies compiling the new database and New York Gov. Andrew Cuomo Wednesday, with the Democratic governor raising concerns about how it might impact vaccine uptake -- especially in immigrant communities.

State immunization systems will provide non-identifying information, such as who has been vaccinated, what vaccine an individual received, and the site where the vaccine was administered, which will be stored in a cyber-secure federal database called the Data Clearinghouse, according to Army Col. RJ Mikesh, information technology lead for OWS, which is tasked with overseeing federal vaccine distribution.

The Centers for Disease Control and Prevention and Department of Health and Human Services have been working on signing data use and sharing agreements with states, counties and other jurisdictions that would allow them to compile state-gathered details in the Data Clearinghouse. The database will then be used for things like accessing patterns of vaccination, tracking the required second doses and highlighting under-vaccinated populations, Mikesh said.

Most states have submitted data use agreements, but a handful were still being worked out, and were expected to be finished last week, OWS officials said on a call with reporters on Monday.

Pennsylvania health department officials initially had submitted edits regarding personally identifiable information, according to department press secretary Nate Wardle. The edits were rejected and the state ended up signing the agreement from the CDC, Wardle told CNN on Friday.

Mikesh defended the information-sharing. "It's really there for that basic uptake, basic safety ... first dose verification. It is not for sharing with other organizations. It's for the pandemic response -- it's a very minimal amount of information. Information that is personal ... is really there to help us with that first dose verification so that we can understand what the person received, and when they receive it," he said.

Both the Pfizer/BioNTech and Moderna vaccines are two-dose vaccines. Making sure people who have been given a first dose also receive the second is critical for full protection against the virus, according to health officials.

"The CDC took a lot of time to understand what those data elements were. They are truly the minimum data requirements of what would be asked for in a pandemic response," Mikesh said.

Cuomo, who has been vocal about the databases' privacy issues, announced Wednesday that after discussions with HHS and the CDC about the unequal impacts of gathering this data, the agencies agreed that New York doesn't have to send Social Security numbers or any other similar data.

Mikesh said personally identifiable information such as Social Security numbers and driver's license numbers will not be shared with federal agencies. But the data use and sharing agreements allow other general details to be shared on a state-by-state basis. Therefore, the information available in the federal database will not be uniform across the country.

Regarding information like race and ethnicity, "some states will agree to provide that information," Deacon Maddox, OWS chief of plans, operations and analysis, said. But states that "redlined it out of the data use agreement" will not be sharing those details.

An HHS spokesperson told CNN on Thursday that only authorized users who are credentialed through a CDC identity-management solution can access the Data Clearinghouse. The agency also noted that only jurisdiction public health officials will have access to the database -- in other words, state officials can access information only within their state, and federal officials can access national information. OWS said the national database was not set up to be used by entities like employers, airlines and private companies, and those entities will not be able to access the database.

One issue highlighted by both Cuomo and non-profit immigrant rights groups is how the data might affect vaccine uptake in the undocumented community.

"Fear that this data could get into the wrong hands will also hurt vaccine distribution efforts in immigrant communities, who have already been left out of COVID-19-related care. Our lives, economy, and way of life depend on the government getting this right," said Jay Stanley, senior policy analyst with the ACLU's Speech, Privacy, and Technology Project.

"If undocumented people don't get vaccinated, it compromises their health and it compromises the whole program," Cuomo said on Wednesday. "Again, the program only works if you hit a critical mass of the population."

HHS has defended the privacy of the data. "No one in Operation Warp Speed can see the identified data in the data clearinghouse. Only once data has been de-identified and aggregated can authorized users within CDC and OWS access it," the HHS spokesperson said.

For individuals eager to have proof of vaccination, OWS said vaccine administrators will also be providing paper vaccine verification cards. The cards record proof of first and second doses.

Mikesh suggested snapping a picture of the card so it's always close at hand.

"Tiberius is the system of record for all allocations of Covid-19 vaccines," Maddox said.

By feeding in data from across the country -- including from state inventory, UPS and FedEx, and local hospitals, Tiberius is set up to compute vaccine allocations, track vaccine shipments and help states plan for vaccine ordering and distribution.

The system can help calculate each jurisdiction's vaccine allowance based on population and the number of doses available, Maddox said. States can then place orders with OWS weekly for any amount of doses, up to their maximum weekly allocation.

"The algorithm is a very simple formula. The number of adult populations in your state times...the number of doses (available). And then we make an adjustment for a strategic reserve, which is 5% of the total bolus that is presented to the government. And then we take half of what's left, and put half in storage, because the federal government holds the second dose until the state can order it," Maddox said.

"Really, there's no magic to this," he said.

Then it is a matter of getting into a cadence and flow of weekly vaccine orders and shipments.

"That's the way that we envision this -- a constant flow. Every week, bank on it," Maddox said.