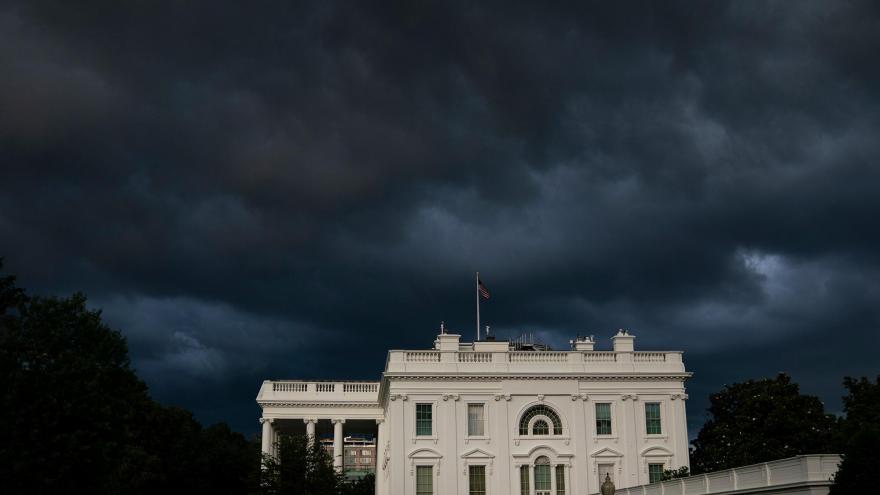 Storm clouds are seen near the White House on June 25, 2020 in Washington, DC.

(CNN) -- Federal authorities are expected to put back into place a "non-scalable" fence around the entire perimeter of the White House on Monday as law enforcement and other agencies prepare for possible protests surrounding the election, a source with knowledge of the matter confirmed to CNN.

The fence, the same type that was put up during protests this summer, will encompass the Ellipse and Lafayette Square. It will go down 15th Street to Constitution Avenue and then over to 17th Street. The fence will then run up to H Street and across by Lafayette, and then come down 15th Street, the source said.

NBC News was first to report the new fencing. A Secret Service spokeswoman declined to comment to CNN, saying the agency does not comment on security measures.

The extra layer of security marks the most high-profile example to date of authorities preparing for unrest following this year's election, particularly if there is no clear winner come November 4.

But as of Monday, Chris Rodriguez, the director of DC's Homeland Security and Emergency Management Agency, told reporters that "we don't have any specific or credible threats for [around] the election."

Half a dozen groups, Rodriguez said, have requested permits for protests and there will likely be "First Amendment activities" in the coming days. As a result, the Metropolitan Police Department will be "fully mobilized" and the emergency operations center will be activated on a 24-hour basis as long as needed.

The city, he added, has not requested any federal resources.

As CNN previously reported, the immediate perimeters around the White House have already been largely blocked off to the public this year for a range of reasons, from construction on the White House gate, to protests and looting that occurred in downtown Washington in the wake of the police killing of George Floyd in Minneapolis in May.

Lafayette Park, across the street from the north side of the White House and a popular protest gathering spot, had also largely been fenced-in since police aggressively moved in on protesters alongside it in July.

Washington, DC, Metro Police Chief Peter Newsham warned the District's City Council last month there was wide expectation of some type of civil unrest following the election. And many businesses in the downtown DC area in the proximity of the White House have boarded up doors and windows in the last couple of days in anticipation of possible protests.

During this past summer, some businesses saw their windows smashed and other property damaged by protesters.

But DC Metro police have been preparing its officers for well over a year, as it does ahead of every general election, ensuring that they are prepared to handle everything from civil disturbance to crowd control to potential disruptions to metro transit, Patrick Burke, executive director of the Washington, DC, Police Foundation, previously told CNN.

Police have also been working with intelligence officials to ensure the security of Washington, DC's airspace in the event of an attack from above, Burke added, as they routinely do when preparing for moments of heightened anxiety.