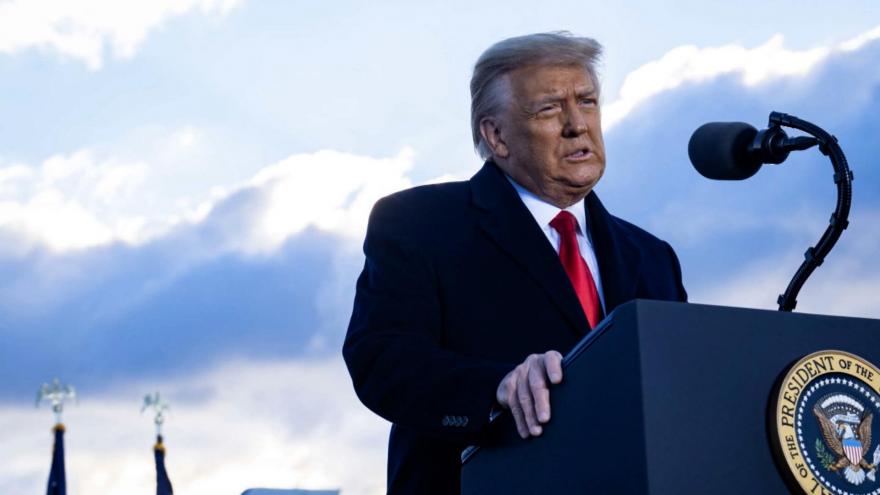 More than 700 documents from Trump's presidency are expected to be turned over by the National Archives to the committee in the coming weeks.

(CNN) -- A federal appeals court on Thursday granted former President Donald Trump's request to pause the release of key White House records from his presidency to the House select committee investigating the January 6 attack on the US Capitol, as he appeals a lower court's decision that he can't claim executive privilege to keep them secret.

Three judges for the US Court of Appeals for the DC Circuit, all of whom were appointed by Democrats, issued the temporary injunction in response to Trump's last-ditch effort ahead of a Friday deadline to turn over an initial batch of 46 records, including White House call logs, visitor logs, drafts of speeches and three handwritten memos from Trump's then-chief of staff, Mark Meadows.

Judges Patricia Millett and Robert Wilkins, both Obama appointees, and Ketanji Brown Jackson, a Biden appointee, sit on the appellate panel considering Trump's request. Jackson, perhaps most known for her 2019 opinion ruling that former Trump White House counsel Don McGahn must comply with a congressional subpoena concerning Russia's interference in the 2016 presidential election, is considered a top pick for the Supreme Court should there be an opening during President Joe Biden's term.

The three-judge panel asked lawyers for Trump, Congress and the Biden administration to submit briefs before oral arguments are heard on November 30.

"The purpose of this administrative injunction is to protect the court's jurisdiction to address appellant's claims of executive privilege and should not be construed in any way as a ruling on the merits," the panel wrote in a two-page order.

In total, more than 700 documents from Trump's presidency had been expected to be turned over by the National Archives to the committee in the coming weeks.

Judge Tanya Chutkan twice rejected Trump's bid for a preliminary injunction to prevent the National Archives from complying with document request, noting in a Wednesday night ruling that Trump's attorneys did not put forward new legal arguments or new facts to alter her previous ruling that held executive privilege belongs to the office -- not the individual.

In a ruling Tuesday, Chutkan wrote, "Presidents are not kings, and Plaintiff is not President."

The former President filed a lawsuit last month in DC District Court, claiming executive privilege and alleging that the House's requests for documents are "unprecedented in their breadth and scope" and illegitimate.

The Biden White House has declined to intervene to block access to the Trump records. The Biden administration has said in a filing to Chutkan that Trump, as the former President, "has no personal interest in the records," and that the Biden White House's decision to allow these presidential records to go to Congress should stand.

On Wednesday, the House committee wrote that it needs the Trump White House records quickly so it can continue investigating the attack on Congress.

"The potential harm to the public is immense: Our democratic institutions and a core feature of our democracy — the peaceful transfer of power — are at stake," the committee wrote. It added that a delay will hinder its ability to "timely complete a comprehensive investigation and recommend effective remedial legislation."