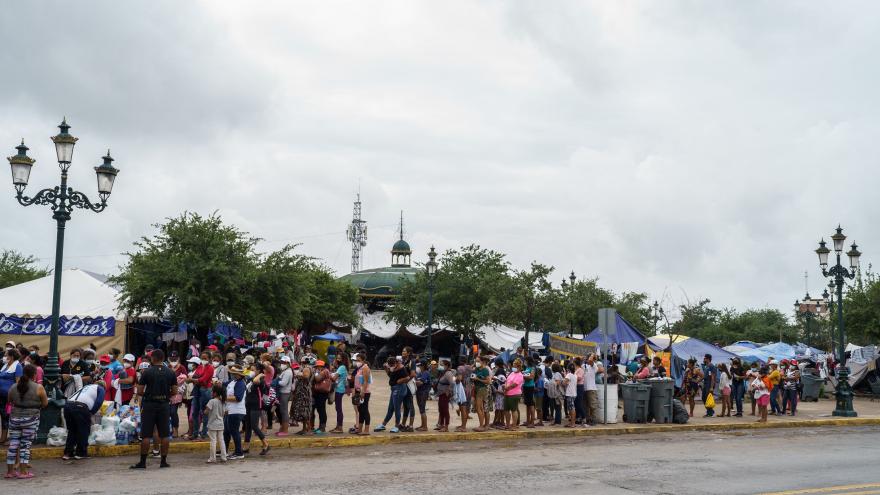 (CNN) -- The United States can continue to swiftly remove migrant families under an emergency pandemic rule, but "only to places where they will not be persecuted or tortured," a federal appeals court ruled Friday, marking a narrow victory for the Biden administration.

The Biden administration has been relying on a public health authority, known as Title 42, that allows authorities to turn back thousands of migrants arrested at the US-Mexico border -- and fielding fierce criticism from immigrant advocates who argue the Trump-era border policy puts people in harm's way.

The ruling Friday by the US Court of Appeals for the District of Columbia Circuit affirmed, in part, a lower-court ruling blocking the expulsion of migrant families, but added: "For now, the Executive may expel the Plaintiffs, but only to places where they will not be persecuted or tortured."

Friday's ruling limits the use of the public health authority, particularly for asylum seekers fleeing danger, according to immigrant advocates.

"The Title 42 policy was enacted by the Trump administration and retained by the Biden administration to block people from seeking refuge from persecution or torture," American Civil Liberties Union attorney Lee Gelernt said. "The court's opinion puts an end to using Title 42 to summarily expel those seeking protection from persecution or torture."

Gelernt, who argued the case, said the ruling will require the administration to screen individuals, many of whom are seeking refuge, prior to expelling them instead of simply turning everyone away.

CNN has reached out to the Department of Homeland Security for comment.

Hours later, though, a federal judge in Texas ruled against the Biden administration's decision to exempt unaccompanied migrant children from being subject to the controversial Trump-era border policy.

The public health authority was invoked at the onset of the coronavirus pandemic, despite suspicions among officials that it was politically motivated. It effectively barred those seeking asylum from doing so and marked a departure from previous protocols.

There have been more than 1 million expulsions since Title 42 went into effect in March 2020, according to US Customs and Border Protection data.

Under former President Donald Trump, authorities also expelled nearly 16,000 children who had arrived at the US southern border without their parents until a federal judge blocked the administration from turning back minors in November 2020.

Friday's ruling, from Judge Mark Pittman in the Texas Northern District Court, stems from a lawsuit filed by Texas against the Biden administration. In the ruling, Pittman writes: "Here, the President has (arbitrarily) excepted COVID-19 positive unaccompanied alien children from Title 42 procedures—which were purposed with preventing the spread of COVID-19. As a result, border states such as Texas now uniquely bear the brunt of the ramifications."

The ruling will take effect in seven days, allowing time for the government to appeal.

Pittman's ruling stands in stark contrast with the skepticism expressed by the DC Circuit over the public health authority. During oral arguments in January, the panel of judges questioned the basis of the order, particularly the premise that it guards against transmission in congregate settings, or specifically US-Mexico border facilities.

Circuit Judge Justin Walker, who wrote Friday's opinion, reiterated those concerns, calling the administration's claim that Covid-19's spread is slowed through use of the order "questionable."

"But this is March 2022, not March 2020. The CDC's § 265 order looks in certain respects like a relic from an era with no vaccines, scarce testing, few therapeutics, and little certainty," the ruling reads, referring to the public health authority.

The panel of judges also states that Customs and Border Protection officials have access to precautionary Covid-19 measures such as vaccines, testing and face masks. "We are not cavalier about the risks of COVID-19. And we would be sensitive to declarations in the record by CDC officials testifying to the efficacy of the § 265 Order. But there are none," the ruling says.

Last month, the US Centers for Disease Control and Prevention said the public health authority should remain in effect, adding that it will continue to assess the order.