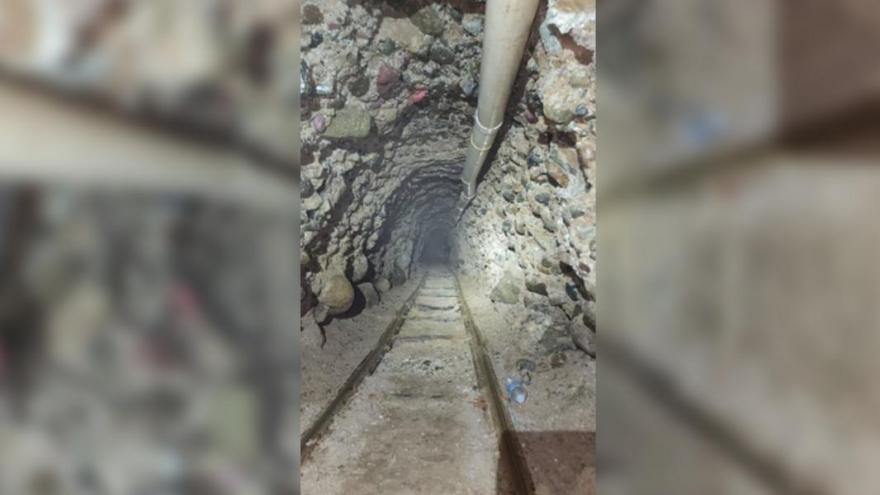 The tunnel was six stories underneath the ground and went under a border fence.

(CNN) -- A recently discovered one-third of a mile-long tunnel under the US-Mexico border has a rail track system, electricity and a ventilation system, federal officials said Monday when they announced drug charges against six people in California.

The passageway was discovered early Friday by a task force led by investigators from the US Department of Homeland Security who had been watching an alleged drug house in National City, just south of San Diego, according to a release from the Justice Department.

Law enforcement followed one person from the home to a warehouse in the Otay Mesa neighborhood in San Diego, about 100 yards north of the border with Mexico.

That person, along with several others, were later arrested after authorities found drugs in their vehicles, the Justice Department said in a criminal complaint.

While searching the warehouse, authorities found a "sophisticated cross-border tunnel exit point carved out of the cement floor."

The tunnel stretches from Tijuana, Mexico, for 1,744 feet to the warehouse in Otay Mesa. It is 61 feet underground and 4 feet in diameter. The builders even reinforced the walls.

"There is no more light at the end of this narco-tunnel," US Attorney Randy Grossman said. "We will take down every subterranean smuggling route we find to keep illicit drugs from reaching our streets and destroying our families and communities."

The Justice Department said this is the 90th tunnel discovery in Southern California since 1993, and the first since March 2020 (which also ended in an Otay Mesa warehouse). The longest tunnel -- 4,300 feet -- was discovered in January 2020.

Of those passageways, 27 were considered "sophisticated."

Six people who live in Southern California have been charged with conspiring to distribute 1,762 pounds of cocaine, the statement adds. Two defendants are also charged with trafficking heroin and methamphetamine.

In addition to cocaine, 164 pounds of methamphetamine and 3.5 pounds of heroin were seized by authorities.