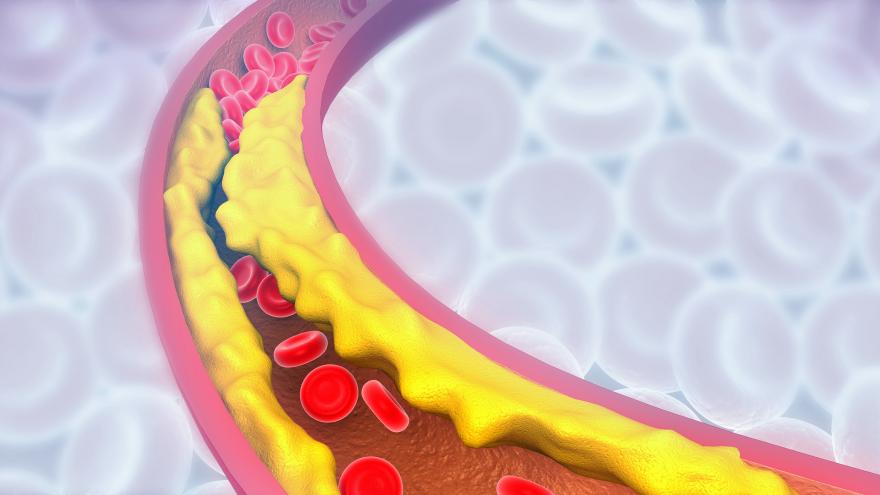 (CNN) -- The US Food and Drug Administration on Friday approved a drug to treat high cholesterol that works differently than statins, according to Esperion Therapeutics, the company that makes the drug.

Bempedoic acid is a once-a-day oral medication that will be commercially known as Nexletol. The FDA approved it for use with a healthy diet and the maximum dose of statins a patient tolerates. Studies show the new drug can reduce what doctors call low-density lipoprotein cholesterol, what you may know as LDL, the "bad" cholesterol that can lead to heart problems or strokes.

The FDA approved this drug based on the fact that it can lower cholesterol, but it's still being studied to see if it will lower the risk of stroke and heart attack in patients who can't tolerate statins.

Nexletol works by inhibiting cholesterol production. Compared to a placebo, the drug reduced LDL cholesterol by an average of 18% in patients who were also on a statin, studies showed. The company has also applied for FDA approval to use the drug as a combination pill with ezetimibe, another non-statin. In studies, that combination reduced cholesterol between 38% to 44%, the company said. That FDA decision is expected soon.

More than 1 in 5 Americans between the ages of 40 and 75 take a statin to prevent an initial heart attack or stroke, a 2017 study estimated. Still there are some people for whom statins don't work or who can't take a high dose because they experience side effects such as stomach problems or muscle aches. Even with diet, exercise and statins, it's estimated nearly 15 million patients in the US cannot get to the recommended cholesterol levels, according to the company.

The drug was generally well-tolerated in clinical studies, the company said, and label warnings and precautions include hyperuricemia, with the development of gout in some patients and an increased risk of tendon rupture or injury. The most common adverse reactions to the drug were upper respiratory infection, muscle spasms, hyperuricemia, back pain, abdominal pain or discomfort, bronchitis, pain in extremity, anemia and elevated liver enzymes.

"Even with maximally tolerated statins, which may mean no statin at all, some of these patients can't achieve their LDL-C goals. Today's approval provides them with a new medicine to go along with a healthy diet," said Tim Mayleben, president and chief executive officer of Esperion in a release.

Cholesterol is the waxy, fat-like substance found in many foods. Your body needs it to function, but if your body makes too much, it can build up in the wall of your arteries. When arteries narrow, it restricts blood and oxygen from flowing to your heart and causes heart problems or stroke.

More than 102 million American adults have cholesterol levels above what are considered healthy and 35 million have levels that are high enough that they're at risk for heart disease.

Dr. Roger Blumenthal, who helped write the current American Heart Association cholesterol treatment guidelines, said it will be good to have another medication that can help patients.

"I definitely think it will be another tool that we have to utilize," said Blumenthal, director of Johns Hopkins Ciccarone Center for the Prevention of Cardiovascular Disease.

Blumenthal said he could see doctors using the new drug if a statin doesn't lower cholesterol enough or if the statin isn't tolerated.

But, he reminds patients that the AHA guidelines suggest they start with making lifestyle changes. A good diet and regular exercise are keys to good heart health, and a healthy lifestyle early on can prevent problems later in life.

"It's always important to remember," Blumenthal said, "good lifestyle habits are the cornerstone of prevention."

Heart disease is the No. 1 killer in the world and the number of people dying from heart problems has been rising and will likely continue to rise with the obesity epidemic. It's an expensive disease, too. Each year, heart disease and stroke cost the United States nearly $1 billion a day in medical costs and lost productivity, studies show.