McKayla Maroney: FBI made 'entirely false claims about what I said' 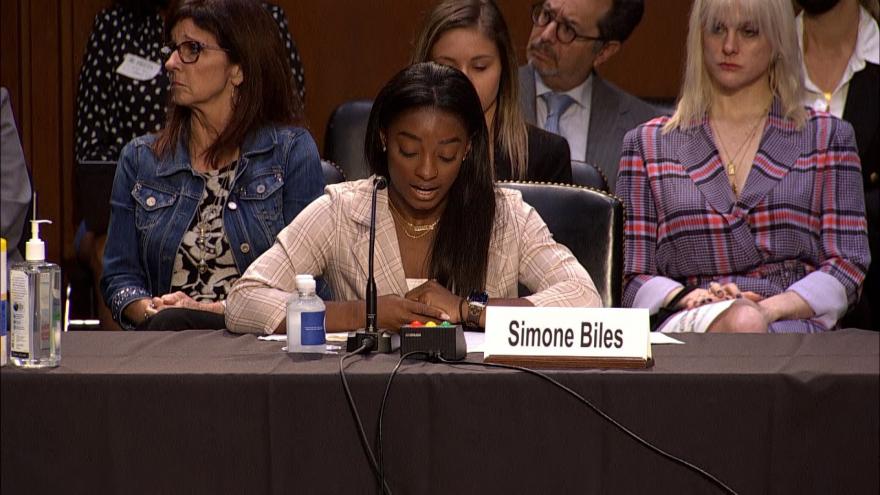 US gymnasts McKayla Maroney, Aly Raisman and others are holding a news conference alongside senators following a hearing this morning into the FBI's mishandling of the Larry Nassar investigation.

(CNN) -- Olympic gymnasts McKayla Maroney and Simone Biles ripped the FBI and the Justice Department in Senate testimony Wednesday for how FBI agents mishandled abuse allegations brought against Larry Nassar and then made false statements in the fallout from the botched investigation.

"They allowed a child molester to go free for more than a year and this inaction directly allowed Nassar's abuse to continue," Maroney told the Senate Judiciary Committee after recounting the vivid details she provided the agent interviewing her about Nassar's abuse.

"What is the point of reporting abuse if our own FBI agents are going to take it upon themselves to bury that report in a drawer?" she added.

Maroney and Biles were joined by gymnasts Maggie Nichols and Aly Raisman, who were also among the hundreds of athletes assaulted by Nassar, the former USA Gymnastics team doctor who is now serving a several-decade prison sentence.

"It truly feels like the FBI turned a blind eye to us and went out of its way to help protect," USA Gymnastics and the United States Olympic and Paralympic Committee, Biles testified while holding back tears.

"A message needs to be sent: If you allow a predator to harm children, the consequences will be swift and severe. Enough is enough," she said.

Raisman called for more investigation into how the Nassar probe was mishandled and said that the FBI pressured her to accept Nassar's plea deal.

"The agent diminished the significance of my abuse. It made me feel my criminal case wasn't worth pursuing," Raisman said.

Allegations into Nassar were first brought to the agency in July 2015. Several violations of protocols led to months of delay, as captured in a scathing Justice Department inspector general report released in July.

FBI officials "failed to respond to the Nassar allegations with the utmost seriousness and urgency that they deserved and required, made numerous and fundamental errors when they did respond to them, and violated multiple FBI policies," the report stated.

Maroney identified herself as the gymnast described -- but not named -- in the report who spoke to the FBI about her allegations in September 2015. The agent who took her interview violated key FBI procedures and made false statements in a summary the agent wrote of the interview more than a year later, according to the inspector general's report.

She and others criticized the Justice Department for its decisions, according to the IG report, to not prosecute the agent as well as an FBI supervisor who was also accused of mishandling the probe and then later making false statements about it.

"After telling my entire story of abuse to the FBI in the summer of 2015, not only did the FBI not report my abuse, but when they eventually documented the report 17 months later, they made entirely false claims about what I said," Maroney recalled.

Later in the hearing, Justice Department Inspector General Michael Horowitz noted that the false information could have jeopardized the criminal case brought against Nassar.

"The Department of Justice refused to prosecute these individuals. Why?" Maroney said, while calling out Deputy Attorney General Lisa Monaco for her absence at the hearing Wednesday. "It is the Department of Justice's job to hold them accountable. I am tired of waiting for people to do the right thing, because my abuse was enough and we deserve justice."

Attorney General Merrick Garland and Monaco are expected to appear before the Judiciary Committee in October, a senior Justice official said.

Senate Judiciary Chairman Dick Durbin noted at the start of the hearing how athletic institutions had failed to protect the athletes from abuse.

"It shocks the conscience when those failures come from law enforcement itself," Durbin said.

FBI Director Chris Wray testified that he felt "heartsick and furious" once he learned the extent of the agency's failures.

Still, he painted the botched investigation as the product of "individuals" who "betrayed the core duty that they have of protecting people," rather than as being reflective of the agency as a whole.

"I want to make sure that the public knows that the reprehensible conduct reflected in this report is not representative of the work that I see from our 37,000 folks every day," Wray said, adding that those actions "discredit" the work of the FBI employees who do the job "the right way."

Wray vowed to "make damn sure that everybody at the FBI remembers what happened here in heartbreaking detail."

Nassar pleaded guilty in 2017 to seven counts of criminal sexual conduct in a case brought by Michigan's attorney general. He was sentenced to 40 to 175 years in prison, after more than 150 women and girls said in court that he had sexually abused them over the past two decades.

In recent weeks, the FBI agent accused in the inspector general's report of failing to launch a proper investigation was fired by the FBI, Wray confirmed. A supervisor who was also singled out in the IG report for violating protocol and false statements retired from the FBI in January 2018.

Gymnasts willing to speak out

The gymnasts testifying Wednesday have all previously spoken publicly about being the victims of Nassar's abuse. Nassar, who also worked for Michigan State University, touched athletes inappropriately under the guise of performing medical treatments on them.

Biles -- a winner of seven Olympic medals, as well as several world and national championships -- revealed this year that she was motivated to compete in the Tokyo Summer Olympics in part because it would force the sport to confront its shortcomings in protecting its athletes.

In her testimony Wednesday, she said that the year-long delay of the Tokyo games meant "living daily among the reminders of this story for another 365 days."

"I am a strong individual and I will persevere, but I never should have been left alone to suffer the abuse of Larry Nassar," Biles said. "And the only reason I did, was because of the failures that lie at the heart of the abuse that you are now asked to investigate."

Raisman, Maroney and Nichols, who competed on the USA's 2015 world championship team, all made public statements in the court proceedings against Nassar.

Nichols reported Nassar to USA Gymnastics in 2015, alleging that his inappropriate touching started when she was 15 and that he also sent her Facebook messages complimenting her looks.

She testified Wednesday that important questions remained unanswered about why the FBI failed to properly document evidence, and about the interest, as captured by the IG report, that the supervisor had in working for USA Gymnastics.

"These questions remain unanswered, and the survivors of Larry Nassar have a right to know why their well-being was placed into jeopardy by these individuals who chose not to do their jobs," Nichols said.

Maroney told the Senate committee the graphic details she shared with the FBI agent during her interview about the abuse she suffered.

"I told him that the first thing Larry Nassar ever said to me was to change into shorts with no underwear, because that would make it easier for him to work on me, and within minutes, he had his fingers in my vagina," Maroney said. She recalled other specific aspects of Nassar's abuse she shared with the FBI, including an instance where he gave her a sleeping pill and how he was "naked, completely alone with him on top of me, molesting me for hours."

"I began crying at the memory over the phone, and there was just dead silence," Maroney testified. "I was so shocked at the agent's silence and disregard for my trauma. After that minute of silence, he asked, 'Is that all?' Those words in itself was one of the worst moments of this entire process for me to have my abuse be minimized and disregarded by the people who were supposed to protect me."

The appearance by Wray and Horowitz before the committee will be only the latest occasion the officials have been subjected to intense questioning on Capitol Hill. During President Donald Trump's administration, Wray -- who was confirmed as director in 2017 -- repeatedly faced hostility from Republicans because of the FBI's investigation into the campaign's Russia links.

More recently, Democrats grilled Wray on the FBI's lack of preparation for the January 6 US Capitol attack.

The anger over Nassar has united lawmakers of both parties, as investigating the FBI's failings has bipartisan support.

"The FBI, including this children's unit, also placed publicity and its image before victims' protection in this case," said GOP Sen. Chuck Grassley of Iowa.

"Every single person in authority who turned a blind eye to these young athletes' allegations is complicit in Nassar's crimes, and each one of them should be considered a predator," said Sen. Marsha Blackburn, a Tennessee Republican.

Lawmakers have also crossed the aisle in support of legislation that seeks to hold universities accountable for failing to protect students from sexual abuse. The senators on Wednesday joined the gymnasts in questioning why the Justice Department chose not to prosecute the FBI officials in question.
"It's not only that the FBI failed to do its job, systematically, and repeatedly. It is also the cover up, the cover up that occurred afterwards," Sen. Richard Blumenthal, a Democrat from Connecticut, said. "When FBI agents made material, false statements and deceptive omission referred by the Inspector General for criminal prosecution those referrals were declined, without explanation. without any public explanation at all."

If you or someone you know is dealing with the aftermath of sexual assault, there are organizations that can help. Please click here for more details.

CORRECTION: An earlier version of this story misidentified when Larry Nassar pleaded guilty. It was in 2017.