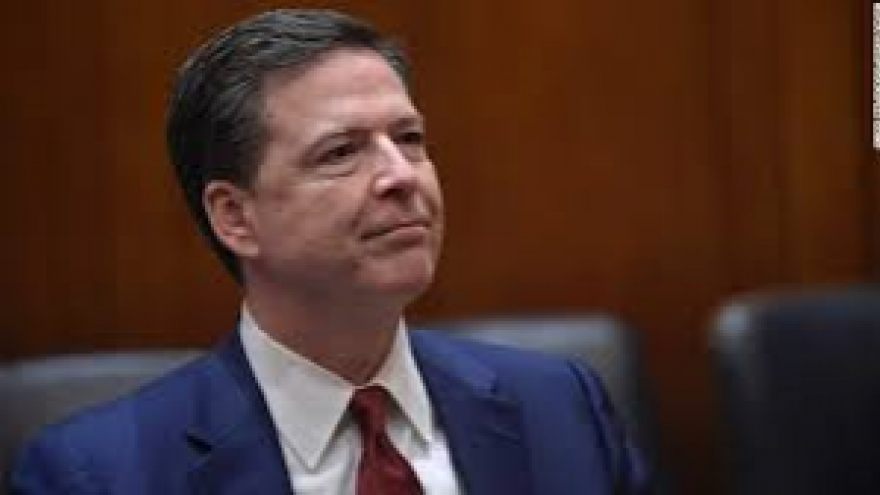 WASHINGTON (AP) — The day in July 2016 that FBI Director James Comey defended to Congress the bureau's decision in the Hillary Clinton email probe, two FBI officials traded admiring texts about his verbal dexterity — and mocking jibes at the lawmakers questioning him.

The officials' assessment of Comey, facing hours of questions about his decision not to seek charges against Clinton for her use of a private email server, was unmistakably flattering.

"God he is SO good," Strzok said. "I know," Page responded. "Brilliant public speaker. And brilliant distillation of fact."

That July 2016 exchange is included among 384 pages of text messages between Page and Strzok provided by the Justice Department to Congress and reviewed by The Associated Press. The texts, part of an inspector general investigation into the handling of the Clinton email probe, are most notable for derogatory messages about President Donald Trump — the discovery of which led to Strzok's reassignment from special counsel Robert Mueller's team. But they also include wide-ranging and unguarded discussion about a variety of current events and public figures, including Edward Snowden, Julian Assange and an encryption court fight with Apple, as well as candid assessments of their colleagues and their FBI careers and futures.

Among the thousands of texts, the dialogue about Comey is especially striking because it further calls into question White House characterizations of an FBI in "tatters," where "countless" agents complained about their director before his removal. Employee surveys released last year show FBI employees consistently gave Comey high marks. And emails published this week by the Lawfare blog show FBI field office leaders using words like "profound sadness" and "hard to understand" in spreading the news about Comey's May 9 termination, one of the events now under investigation by Mueller for possible obstruction of justice.

The texts proved an explosive development when revealed in December, giving rise to Republican allegations of bias in the FBI and the Justice Department and leading Trump to make an extraordinary allegation of "treason" against Strzok that the agent's lawyer dismissed as "beyond reckless." Strzok was removed from Mueller's group in July after Mueller learned of the texts. Page, who'd also been detailed to that team, left that assignment before the messages were discovered.

Since then, amid attacks on the bureau, Director Christopher Wray has defended the FBI as home to "tens and thousands of brave men and women." Attorney General Jeff Sessions, meanwhile, has been more muted in his support, saying criticism can be appropriate and that political bias "in either direction" must be eliminated.

There's no question both Strzok and Page were stridently opposed to Trump's candidacy and the prospect of a Trump administration, using words like "idiot," ''loathsome," ''menace" and "disaster" to describe him. In one text four days before the election, Page told Strzok that the "American presidential election, and thus, the state of the world, actually hangs in the balance." They frequently texted each other news stories about Russian election meddling, denigrated Trump associate Roger Stone and, in one profanity-laced message, Strzok cursed out the "cheating (expletive) Russians."

But the texts, which encompass a two-year period beginning around the start of the Clinton email investigation in 2015, cover far more ground than Trump.

They underscore how the Clinton inquiry, well before the launch of the investigation into the Trump campaign and Russia, caused anxiety and tension within the FBI and Justice Department as witness interviews, strategic decisions and even public statements were picked apart internally and in the news media in the months preceding the election.

Strzok was distressed, for instance, that former President Bill Clinton had an impromptu meeting with Attorney General Loretta Lynch aboard her place in the investigation's final stages. Lynch subsequently announced that she would accept the FBI's recommendations, setting the stage for Comey's announcement that the FBI would not seek charges.

"All the airport tarmac articles finally burst out. Took a little bit. Not a big deal, just ASTOUNDINGLY bad optic. And doesn't help what the D is trying to do," he texted in an apparent reference to the FBI director.

Weeks before that, Strzok confided to Page that Justice Department lawyers were concerned by the late discovery of classified marking notations along some paragraphs in State Department emails.

"No one noticed. And while minor, it cuts against, 'I never send or received anything marked classified," he wrote. "Because they're worried, holy cow, if the FBI missed this, what else was missed?"

He was also flummoxed at one point by what he said was the "worst news" — that a computer specialist had used wiping software to delete email messages, making it, he said, potentially "much harder" to recover what they needed.

The texts also make clear that FBI leadership knew weeks before Comey alerted Congress that a trove of emails relevant to the Clinton investigation had been found on a laptop belonging to former Rep. Anthony Weiner. It remains unclear why the FBI waited a month before revealing the discovery of new emails and before obtaining a warrant to scour them. On Sept. 28, 2016, one month before the news became public, Strzok told Page that he'd been summoned to the deputy director's office because "hundreds of thousands of emails" had been turned over by Weiner's attorney to prosecutors as part of a sexting investigation, with a "ton of material" believed to be from Weiner's wife.

But for a time, it did seem to have ended. Comey closed out the case July 5, 2016, and two days later, faced hours of questioning from a House committee. The two officials watched, and though Strzok lamented that he was a "control freak" and that some answers were imprecise, they also texted admiringly of his performance — even his joked that he had to use the bathroom for the last half-hour.