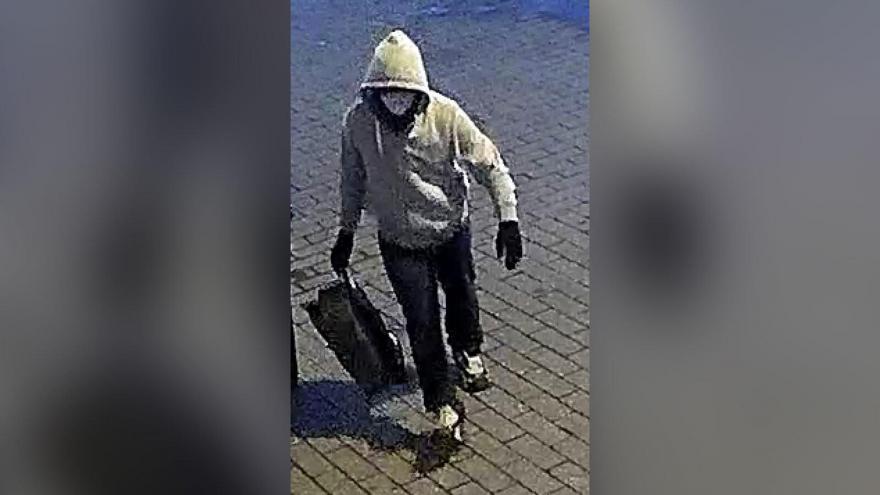 (CNN) -- The FBI released new security footage Tuesday as authorities continue to seek more information about the person who placed pipe bombs outside the Republican National Committee and Democratic National Committee headquarters that were discovered in Washington, DC, on the day of the Capitol riot.

Two pipe bombs near the Democratic and Republican party headquarters were planted on January 5, the night before the insurrection at the Capitol, the FBI has said.

The videos, which offer multiple angles from several surveillance cameras, offer a clearer look at a masked individual who is wearing a hood as the person moves through neighborhoods and near the RNC and DNC. At one point, the individual stops and wipes off their glasses. They also sit down on a bench near the DNC.

In January, the FBI issued a wanted poster of the suspect, who was wearing Nike Air Max Speed Turf shoes in yellow, black, and gray, and included enhanced photos of them, along with photos of the devices. Authorities have said the bombs were placed between 7:30 and 8:30 p.m. on January 5, the night before the insurrection.

"We believe the information released today will help someone recognize the suspect, or something about them," FBI assistant director in charge Steven D'Antuono said in a video statement.

D'Antuono said the person who is believed to have placed the pipe bombs wore a facemask, a gray sweatshirt, and black and gray Nike shoes.

"One device was placed in an alley behind the RNC," D'Antuono said. "The other was placed next to a park bench near the DNC."

In addition to providing the physical description of the suspect, the FBI appealed to the public to come forward with any information about people who may have experienced changes in behavior prior to, during or after the January 6 insurrection.

"This could include making travel plans to Capitol Hill or researching the locations of the DNC and RNC," D'Antuono said, as well as anyone who may have purchased threaded pipe and kitchen timers prior to the incident.

CNN previously reported the devices had been rigged to egg timers and filled with an explosive powder. Officers from the ATF, FBI, US Capitol Police and DC Metropolitan Police had responded to the scene at the two offices, which are less than a quarter mile apart and just blocks south of the Capitol, and the bombs were safely detonated at the scene by robots.

The bombs were discovered within minutes of each other around 1 p.m. ET on January 6, just around the time that a mob of angry supporters of then-President Donald Trump descended on the building after a nearby rally with the President, according to an account the acting chief of the US Capitol gave to lawmakers in January and the FBI poster.

The FBI, along with the Bureau of Alcohol, Tobacco, Firearms and Explosives, is offering a $100,000 reward for information leading to the identification of the person responsible for placing the explosives. They are asking people to contact the FBI at 1-800-CALL-FBI or submit tips online at Tips.fbi.gov, which can be submitted anonymously.

This story has been updated with additional information and background.