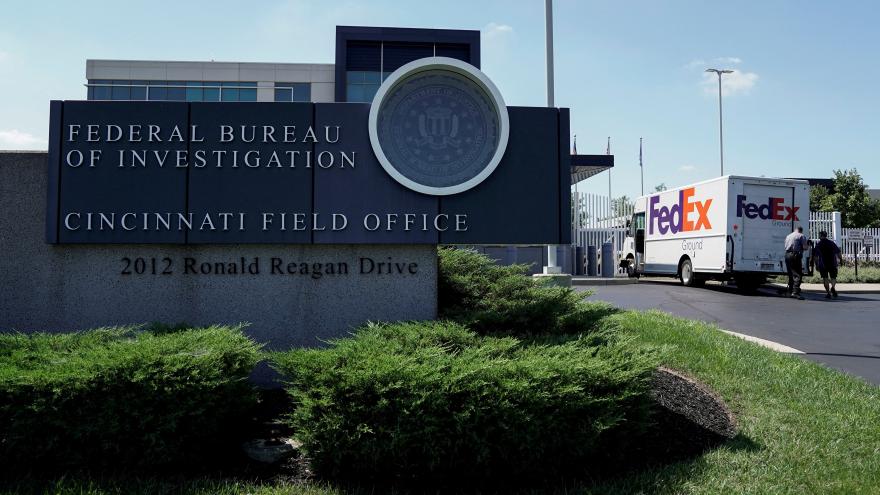 (CNN) -- The FBI is investigating an "unprecedented" number of threats against bureau personnel and property in the wake of the search of former President Donald Trump's Mar-a-Lago resort, including some against agents listed in court records as being involved in the recent search, a law enforcement source tells CNN.

The bureau, along with the Department of Homeland Security, also has issued a joint intelligence bulletin warning of "violent threats" against federal law enforcement, courts and government personnel and facilities.

On Friday, the names of the two agents who signed the search warrant paperwork circulated online. The names had been included in a version of the search warrant that was leaked prior to the official unsealing of the documents. The version released by the court redacted the agents' names.

Officials at the FBI headquarters division responsible for the security of personnel also have observed efforts by online actors to publicly post -- also known as "doxxing" -- the personal information of other bureau employees, including those involved in the search of Trump's residence, a law enforcement source tells CNN.

Unlike other officers in the US intelligence community who operate undercover, the overwhelming majority of FBI employees operate in true name, the source noted, which makes those named in court filings pertaining to the search particularly vulnerable to nefarious online actors.

The heightened level of threats follows a high-profile week for the bureau in which agents executed a search warrant at Trump's Palm Beach property as part of an evidence-gathering step in a national security investigation about presidential records, including classified documents, taken to Florida. The warrant, which was unsealed and released by a federal judge on Friday, revealed the Justice Department is looking into possible violations of the Espionage Act, obstruction of justice and criminal handling of government records, as part of its investigation.

In the days following the search, violent threats surfaced online, with posters writing, "Garland needs to be assassinated" -- referencing Attorney General Merrick Garland, who "personally approved" the decision to seek a warrant -- and "kill all feds." Additionally, the biography and contact information of the federal magistrate judge who signed the search warrant was wiped from a Florida court's website after he too became the target of violent threats.

In a separate incident Thursday, a man who was believed to be armed with an AR-15 rifle and a nail gun tried to breach the FBI's Cincinnati field office. He was killed hours later after a standoff with authorities. Although the suspect's motive has not yet been identified, he had been known to the FBI because he had an unspecified connection to the January 6, 2021, riot at the US Capitol, and because he had associates within a far-right extremist group, two law enforcement sources told CNN Friday.

"Let me also assure you that your safety and security are my primary concern right now. Security Division is working across the agency as we continue to stay vigilant and adjust our security posture accordingly," Wray said in the statement reviewed by CNN.

The FBI Security Division in Washington has notified the bureau's more than 38,000 employees nationwide to remain vigilant when operating in and around bureau facilities, two federal law enforcement sources told CNN.

The FBI declined to comment on any specific threats against bureau employees but told CNN in a statement that the bureau "is always concerned about violence and threats of violence to law enforcement, including the men and women of the FBI."

"We work closely with our law enforcement partners to assess and respond to such threats, which are reprehensible and dangerous," the statement said. "As always, we would like to remind members of the public that if they observe anything suspicious to report it to law enforcement immediately."

Bulletin warns of threats against authorities and government personnel

On Friday, the FBI and DHS issued a joint intelligence bulletin pointing to the increased threat landscape.

"These threats are occurring primarily online and across multiple platforms, including social media sites, web forums, video sharing platforms, and image boards. The FBI and DHS would like to ensure that law enforcement, court, and government personnel are aware of the range of threats and criminal and violent incidents," the bulletin reads.

Friday's joint intelligence bulletin notes an increase in violent threats online against federal officials and facilities, "including a threat to place a so-called dirty bomb in front of FBI Headquarters and issuing general calls for 'civil war' and 'armed rebellion.'" It also states that the FBI and DHS have identified threats against specific individuals, including the federal judge who approved the Mar-a-Lago search warrant.

DHS has been warning for more than a year that people will use political ideologies to justify acts of violence, and underscored in the latest warning the threat posed by domestic violent extremists being motivated by perceptions of government overreach and election fraud.

After the January 6 attack, alternative social media platforms became more popular among Trump supporters after companies like Facebook and Twitter banned Trump and some other prominent figures who spread election conspiracy theories.

Those platforms, like Trump's own Truth Social site, tout themselves as bastions of free speech, with looser rules and moderation, but that leeway can result in the proliferation of violent rhetoric.

Talk of violence isn't exclusive to the more fringe platforms, however. There was a surge in tweets Monday mentioning "civil war" -- at some points more than one tweet a second, according to a CNN review of data from Dataminr, a service that tracks Twitter activity.