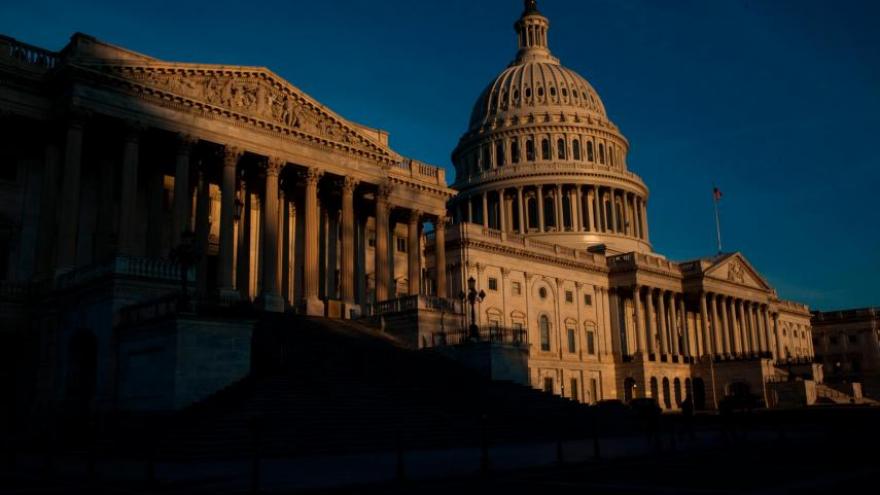 The FBI is investigating the breach of an air traffic control system after someone broadcast a threat to fly a plane into the US Capitol building on Jan. 6 as revenge for the killing a year ago of Iranian Gen. Qasem Soleimani, according to a source familiar with the probe.

(CNN) -- The FBI is investigating the breach of an air traffic control system after someone broadcast a threat to fly a plane into the US Capitol building on Wednesday as revenge for the killing a year ago of Iranian Gen. Qasem Soleimani, according to a source familiar with the probe.

The threat did not appear credible, multiple sources told CNN.

The broadcast was picked up by air traffic controllers in New York, the source said, adding that FBI offices there and in Washington are looking into the matter.

CBS News was first to report the broadcast of the threatening message.

The threat, an administration official tells CNN, was a strange isolated incident and did not match any known chatter or intelligence. In fact, the threat had no correlation to anything the US is currently tracking on Iran, the official said.

While tensions with Iran have steadily increased in the waning days of President Donald Trump's term and concerns have recently emerged that Iran may attempt to use the anniversary of Soleimani's death as a reason to target the US, many within the Pentagon believe that threat is currently receding.

Top congressional Democrats also appeared to be unaware of the threat late Tuesday as aides told CNN they learned of it only after the news broke. Aides for Senate Majority Leader Chuck Schumer of New York and top Senate Intelligence Committee Democrat Mark Warner of Virginia said they had been unaware of the threat before the CBS story emerged.

Even if the threat was not deemed credible, it is a felony offense to make such threats over aviation frequencies.

The FBI declined to comment on the matter but said it "takes all threats of violence to public safety seriously."

The Federal Aviation Administration also did not directly address questions about the specific threat but said it "works closely with federal law enforcement and national security partners on any reported security threats that may impact aviation safety."

US Capitol Police spokesperson Eva Malecki told CNN, "The United States Capitol Police takes all threats of violence to the U.S. Capitol and the Congress very seriously, and is working closely with our Federal law enforcement partners."

The news of the air traffic control warning came two days after the one-year anniversary of Soleimani's assassination in a US drone strike, a day that some US officials had worried Iran would mark with retaliation but that passed without violence.

The US has scaled up its military presence in the Middle East in a show of deterrence that included sending nuclear-capable B-52 bombers to the region, publicizing the transit of nuclear submarines near the Persian Gulf and, on Sunday, Trump's decision to extend the aircraft carrier USS Nimitz's stay in the area.

On Thursday, Iranian Foreign Minister Javad Zarif charged that the US was creating a pretext for war. But on Friday, Soleimani's successor marked his death by pledging that "those who took part in this assassination and crime will not be safe on earth. It's definite."

Speaking to a crowd gathered to observe the deadly anniversary, Gen. Esmail Ghaani called Trump a "foolish man" under the sway of Israel and Saudi Arabia, and warned that "it's possible, even from inside your own house, there may emerge someone who will retaliate for your crime."

But Iran appeared to opt for a carefully calibrated response instead, announcing that it had increased uranium enrichment to levels seen before the 2015 nuclear deal Trump abandoned and seizing a South Korean-flagged tanker in the Gulf. Meanwhile, Iran's proxies signaled de-escalation.

The leader of the Iran-backed Iraqi Shiite militia group Kataib Hezbollah issued a statement saying the group would not try to "enter" the US Embassy in Baghdad, which was attacked in the wake of Soleimani's 2019 killing, or seek to overthrow the current Iraqi government, even as crowds gathered in Baghdad's Tahrir Square on Sunday to demand that US forces leave the country.

While there is still concern the US or Iran could miscalculate, there is a widespread assessment among diplomats who watch Iran that Tehran has every incentive to avoid provocation that could trigger conflict and undermine President-elect Joe Biden's ability to follow through on plans to return to the nuclear deal and eventually ease sanctions that Trump used to hobble Iran's economy.

"I think that Iran knows in a few days the game starts again and if they do something stupid now it doesn't help their position," one diplomat told CNN.