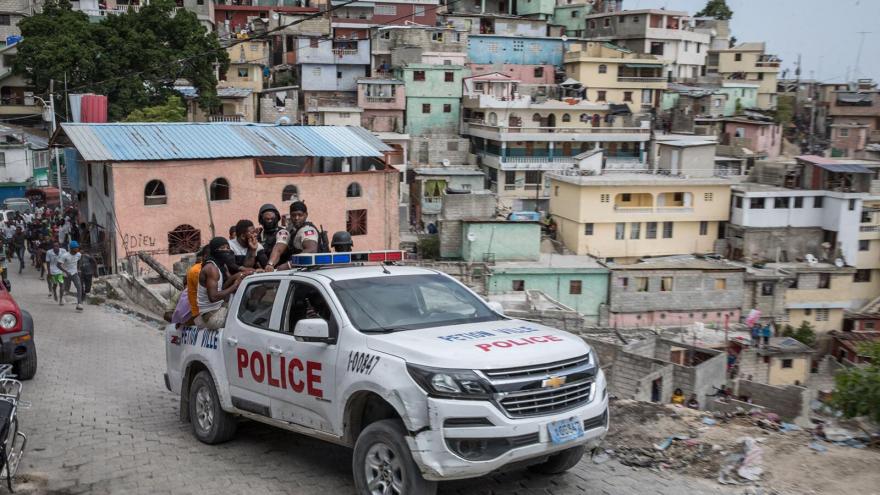 (CNN) -- The United States is sending officials to Haiti at the request of that country's government in the aftermath of the assassination of the nation's President earlier this week, and Haiti has asked for several hundred US troops as well.

"The US remains engaged," White House press secretary Jen Psaki told reporters Friday, adding that senior FBI and Department of Homeland Security officials will travel to Port Au Prince "as soon as possible," where, she said, they will assess the situation and provide assistance on security and the investigation.

The Haitian government has requested US troops to help protect infrastructure, ports, airports and energy systems, Haitian Elections Minister Mathias Pierre told CNN. Mathias said the request was for a limited number of around 500 troops and that he anticipated the threat to be "potential mercenaries."

The Pentagon acknowledged the request on Friday afternoon.

"The Haitian government has requested security and investigative assistance, and we remain in regular contact with Haitian officials to discuss how the United States can assist. For anything further, we refer you to the U.S. State Department," the Pentagon said in a statement.

CNN has reached out to the State Department.

Haiti's President Jovenel Moise was killed during an attack on his private residence in the capital of Port-au-Prince early Wednesday. Haiti's first lady, Martine Moise, was also shot in the attack and evacuated to a hospital in Miami for treatment.

Moise's assassination has thrown the Caribbean nation into deeper turmoil, as his death leaves a power vacuum and comes as Haiti has been dealing with a wave of extreme violence, a growing humanitarian crisis and a worsening Covid-19 pandemic.

Haitian police have so far detained 17 suspects, including two US citizens, in connection to the fatal shooting and are searching for at least eight additional suspects. Little is known about the suspects and their motivation for the attack.

Pressed on reports that two Haitian Americans were involved with the assassination, Psaki declined to comment.

"The investigation is being led by Haitian police forces on the ground," she said, declining to get ahead of the ongoing investigation.

US State Department spokesperson Ned Price also confirmed Friday that the Haitian National Police requested investigative assistance from the US and the US is responding to that request.

Psaki also outlined existing US assistance to the country, including the State Department's Bureau of International Narcotics and Law Enforcement Affairs' direct assistance to the Haitian National Police on gang violence and community intervention.

Additionally, she noted that the Department of Homeland Security extended Temporary Protected Status to Haiti for 18 months, which DHS is working to implement.

Haiti will also be receiving vaccines from the US, Psaki added, which could come "as early as next week" pending airport delivery.

The country has been one of only a few across the globe that have not yet started vaccinating against the virus.

This story has been updated worth additional information.