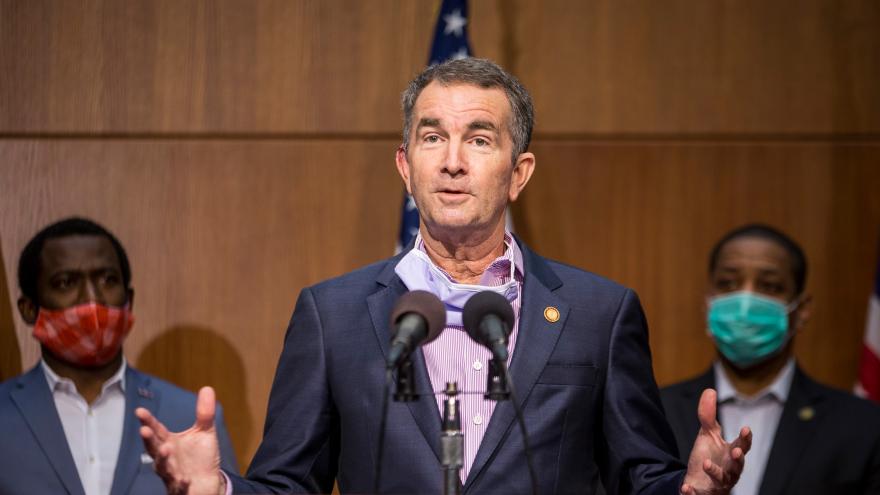 FBI agent Richard Trask testified during a preliminary hearing that the group discussed taking out sitting governors due to their "coronavirus-related lockdown orders."

"They discussed possible targets, taking a sitting governor, specifically governors of Michigan and Virginia, over shut down orders," Trask said.

"The understanding at the time was to potentially kidnap a sitting governor and remove them from office," he added.

The FBI obtained this information during a June 6 meeting in Dublin, Ohio. A person who attended the meeting came forward to authorities "based on concerns (over) some of the directions that the group was headed and potential violence."

The court hearing came days after 13 people were charged in an alleged domestic terror plot to kidnap Whitmer. The alleged scheme included plans to overthrow several state governments that the suspects "believe are violating the US Constitution," according to a federal criminal complaint.

Six people were charged federally with conspiracy to kidnap, and seven other people, associated with the paramilitary group "Wolverine Watchmen," were charged by the state, Michigan Attorney General Dana Nessel announced.

Whitmer and Northam, both Democrats, were among the governors who issued coronavirus-related executive ordersin the spring that closed gathering places like gyms, bars and restaurants.

Northam declined to comment on Tuesday afternoon, citing the ongoing criminal investigation, but he did thank the security and police for their work.

His office issued a statement saying that the FBI alerted key members of the governor's security team throughout the investigation.

"Per security protocols for highly-classified information, neither the Governor nor other members of his staff were informed. At no time was the Governor or his family in imminent danger. Enhanced security measures have been in place for Governor Northam and his family for quite some time, and they will remain," press secretary Alena Yarmosky said.

"Here's the reality: President Trump called upon his supporters to 'LIBERATE VIRGINIA' in April — just like Michigan. In fact, the President regularly encourages violence against those who disagree with him. The rhetoric coming out of this White House has serious and potentially deadly consequences. It must stop," Yarmosky said.

"President Trump has continually condemned white supremacists and all forms of hate. Governor Whitmer, and now Governor Northam, are sowing division by making these outlandish allegations," she said. "America stands united against hate and in support of our federal law enforcement who stopped this plot."

How the plot came to be

Trask's testimony on Tuesday provided further details on the alleged plot first hatched in a social media group and then developed in the basement of a vacuum repair shop.

At meetings in Dublin, Ohio, in Grand Rapids, Michigan, and a rural yard in Munith, Michigan, the group allegedly plotted to take violent action against the state, conducted tactical training, and tried unsuccessfully to make bombs, according to court documents.

The FBI became aware of the scheme, first reported by The Detroit News, in early 2020 through a social media group, according to the federal criminal complaint.

Court documents say the FBI planted a confidential informant to travel to Dublin, Ohio, on June 6 for a meeting with Croft, Fox and about 13 others.

"They discussed different ways of achieving this goal from peaceful endeavors to violent actions ... Several members talked about murdering 'tyrants' or 'taking' a sitting governor," according to the complaint.

By June 14, a second confidential informant confirmed that Fox was introduced to the leader of the group and they met in Grand Rapids. The informant audio-recorded conversations with Fox in which he allegedly said he needed "200 men" to storm the Capitol building in Lansing and take hostages, including Whitmer, according to the criminal complaint.

Fox allegedly explained they would try the governor of Michigan for "treason" and he said they would execute the plan before the November 2020 election.

On June 20, Fox, Garbin and others met at Fox's business in Grand Rapids where attendees met in the basement accessed by a trap door hidden under a rug on the main floor, according to the criminal complaint.

"The attendees discussed plans for assaulting the Michigan State Capitol, countering law enforcement first responders, and using 'Molotov cocktails' to destroy police vehicles. The attendees also discussed plans for an additional meeting during the first weekend of July when they also would conduct firearms and tactical training," according to the criminal complaint.

The conspirators conducted surveillance of Whitmer's vacation home on two occasions in late August and September, the complaint said. Croft and Fox discussed detonating explosive devices to divert police from the vacation home area, according to the FBI.

The group also met at a rural property in Munith for what officials called tactical training. Trask said Tuesday this included firearms training, medical training and an attempt to detonate an improvised explosive device.