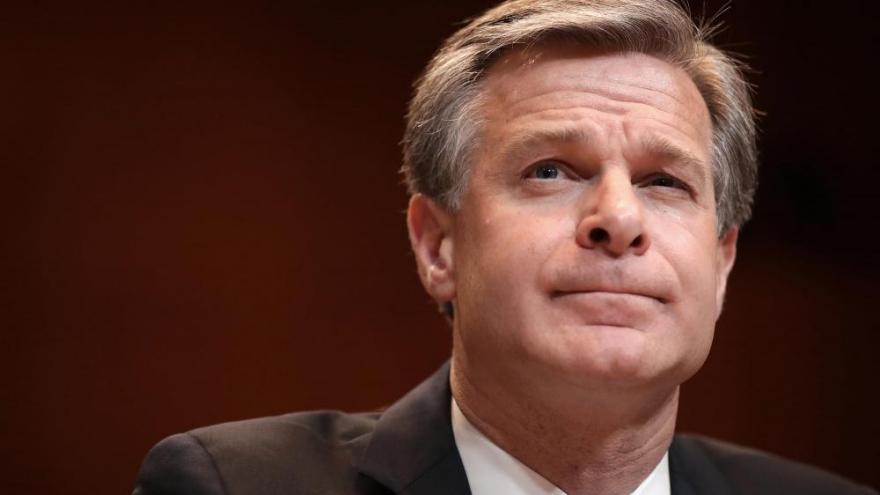 FBI Director Chris Wray will finally have to answer questions about the January 6 insurrection when he appears before the Senate Judiciary Committee Tuesday, his first public testimony since the deadly riot occurred nearly two months ago.

(CNN) -- FBI Director Chris Wray told lawmakers Tuesday that the FBI has not seen any evidence indicating that the rioters who took part in the January 6 US Capitol attack were "fake Trump protesters," knocking down a baseless claim that has been pushed by Republican Sen. Ron Johnson in recent weeks as he has sought to downplay the violence committed by supporters of former President Donald Trump.

Testifying publicly for the first time since pro-Trump rioters breached the Capitol nearly two months ago, Wray was pressed by Senate Judiciary Committee Chairman Sen. Dick Durbin on whether the FBI has seen any evidence that individuals involved in the January 6 attack were posing as Trump supporters -- a claim the Illinois Democrat called "the next big lie."

"We have not seen evidence of that, at this stage, certainly," Wray responded when Durbin asked if he had seen any evidence the riot was organized by "fake Trump protesters," referring to comments Johnson made during a Senate hearing last week in which he also claimed those involved in the attack were "agents provocateurs."

Most Republicans on the panel did not embrace these conspiracies, but the baseless claim that left-wing infiltrators were responsible for the violent attack has been promoted by Trump's impeachment lawyers, several GOP lawmakers and at least one speaker at the Conservative Political Action Conference last week.

On Tuesday, Wray made clear that Antifa and other left-wing groups were not part of the violence on January 6, which he called "domestic terrorism" -- even as several Republicans sought to use the hearing as an opportunity to highlight the threat posed by those groups rather than focus on the Capitol attack.

"We have not, to date, seen any evidence of anarchist violent extremists or people subscribing to Antifa in connection to the 6th," Wray told the Senate committee.

More than 260 defendants -- many of them professing allegiance to Trump, disgust for Congress, and supportive of revolution -- have been charged in federal court related to their actions in and around the US Capitol siege on January 6.

Previously, nearly a dozen Trump supporters charged in connection with the US Capitol insurrection have said that Antifa and other left-wing groups weren't involved in the attack, further debunking the conspiracy among Trump supporters.

Additionally, Wray testified Tuesday that the FBI is "not aware of any widespread evidence of voter fraud that would have affected the outcome in the election," undercutting a false narrative that was repeatedly pushed by Trump and his allies during the 2020 campaign.

Many Republicans on Capitol Hill have continued to push unfounded accusations of widespread election fraud, which Trump critics have taken to calling "the Big Lie," in the weeks since the January 6 attack despite evidence that such claims helped fuel the deadly riot and warnings they continue to motivate domestic extremists.

While Wray spent much of Tuesday's hearing dispelling dangerous false claims, he dodged an opportunity to denounce lawmakers who endorse the QAnon conspiracy theories.

Connecticut Sen. Richard Blumenthal said he was "disappointed" Wray sidestepped an opportunity to condemn elected officials who have amplified the QAnon claims when asked if they are contributing to the threat of domestic extremism by doing so.

"Well, certainly we are concerned about the QAnon phenomenon which we view as a sort of loose, sort of set of conspiracy theories, and we've certainly seen domestic violent extremists of the sort that you're describing, who cite that as part of their motivation. And so that's something that we do," Wray said.

Blumenthal interrupted Wray for not immediately condemning the idea that lawmakers support the insurrectionists and asked the question in another way: "When members of Congress, as has happened endorse the QAnon theory, doesn't it worsen the threat of violence?"

But Wray still did not take the opportunity to denounce the behavior, prompting Blumenthal to make clear he was disappointed by the response and intends to follow up on the issue in another setting.

In October, CNN reported that several congressional candidates engaged with the QAnon conspiracy theory of those mentioned, Marjorie Taylor Greene went on to win a seat in Georgia's 14th Congressional District.

Wray's team of federal investigators is currently chasing thousands of leads in twin efforts to prosecute people involved in the January 6 attack on the US Capitol and to try to prevent feared follow-up attacks in Washington and around the country.

While federal law enforcement officials have sought to reassure the American public in the months since the riot that they are up to the task on both fronts, their public remarks also lay bare the enormity of the challenge they face in tracking potential threats to not only the nation's capital, but across the country.

Law enforcement officials have indicated to CNN that authorities missed key signs ahead of the siege, which left five dead and the Capitol ransacked, and the FBI's preparations leading up to the day of the attack have come under scrutiny.

On Tuesday, Wray defended the FBI's sharing of critical information about possible threats to the Capitol ahead of January 6, including its handling of the "Norfolk memo," which has become central to questions about whether law enforcement agencies protecting the Capitol had enough sound intelligence before the siege to prepare.

Wray described how the FBI shared an intelligence report about online chatter before January 6 quickly, in three ways with other law enforcement agencies, after receiving the information from the FBI's Norfolk field office.

His answers to at least three senators' questions on Tuesday about the Norfolk report fill out where and how the intelligence was shared, and stands in contrast to testimony last week from law enforcement chiefs around the Capitol who largely blamed security failures on a lack of intelligence that had been communicated.

The Norfolk report was passed to law enforcement partners, Wray said, including the Capitol Police and metro police within an hour of it being received.

It was shared in three ways: an email to the Joint Terrorism Task Force, a verbal command post briefing in the Washington field office and at FBI headquarters that involved police in DC, and through the law enforcement portal, according to Wray.

"In a perfect world we would have taken longer to figure out whether it was reliable, but we made the judgment, our folks made the judgment to get that information to the relevant people as quickly as possible, like I said, three different ways, in order to leave as little as possible to chance," Wray said.

Wray called the memo "raw, unverified, uncorroborated information" that had been gathered from online posts, but was notable enough for the FBI to share with police in Washington almost immediately. "It's more than just an email," Wray said.

Wray did not see the Norfolk report until after the 6th, he added.

"As to why the information didn't flow to people in all the departments ... I don't have an answer for that," he said later.

Charging documents continue to reveal new information about the extremists who took part in the US Capitol attack, including members of right-wing militant groups who prosecutors have charged with conspiracy-related crimes.

Yet lawmakers have indicated they remain less clear on the threat these types of individuals continue to pose and have unsuccessfully pressed law enforcement officials to justify the heightened security posture on Capitol Hill.

A Department of Homeland Security spokesperson told CNN last month that officials are not currently tracking any "credible or specific threats," but continue to constantly monitor online chatter about potential violence in Washington, DC, and against members of Congress.

But despite testifying for more than three hours on Tuesday, Wray revealed very little about how the FBI gathers intelligence on domestic extremists or whether it plans to change its approach based on what occurred on January 6.

One of the few insights he did provide is that the FBI is "always looking to develop more and better sources" to combat domestic terrorism and counterterrorism threats, but the key to gaining intelligence is through arrests.

He also told lawmakers that says the more arrests the FBI makes, "the more from those cases we learn about who else their contacts are, what their tactics are, what their strategies are ... and that makes us smarter and better able to get in front of the threat, going forward."