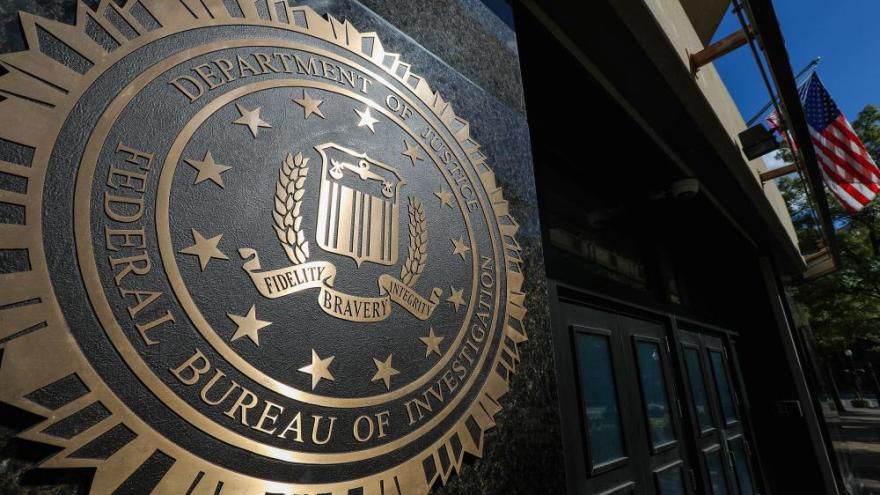 The Federal Bureau of Investigation Headquarters building in Washington D.C. is pictured on October 18, 2021. A veteran FBI agent who engaged with social media posts critical of former President Donald Trump and retired from the bureau last week says he is cooperating with a government investigation into his conduct.

(CNN) -- A veteran FBI agent who engaged with social media posts critical of former President Donald Trump and retired from the bureau last week says he is cooperating with a government investigation into his conduct.

Timothy Thibault, who worked in the FBI's Washington field office as assistant special agent in charge, retired voluntarily from the FBI last week, according to a statement from Morrison & Foerster, the law firm that's representing him. The statement said that Thibault said he informed his supervisors that he intended to retire roughly a month ago, following a 30-year FBI career.

Thibault's social media activity was criticized by Sen. Chuck Grassley of Iowa, the top Republican on the Senate Judiciary Committee, who sent letters in May to FBI Director Chris Wray, Attorney General Merrick Garland and the DOJ inspector general. In addition, Republicans have alleged that Thibault took steps in 2020 to suppress the FBI's investigation into the finances of Hunter Biden, the son of President Joe Biden.

Trump has also amplified criticisms of Thibault in his social media postings in recent days.

Thibault's attorneys said that Thibault did not supervise the Hunter Biden investigation, reiterating Wray's testimony that it was run out of the FBI's Baltimore field office.

In the statement, Thibault's attorneys said he is cooperating with the Office of Special Counsel investigation into allegations he violated the Hatch Act, a law that limits the political activities of government employees.

Thibault also denied allegations he took actions in any investigation for partisan political reasons, according to his law firm's statement.

"He firmly believes that any investigation will conclude that his supervision, leadership and decision making were not impacted by political bias or partisanship of any kind," the law firm said. "He is confident that all of his decisions were consistent with the FBI's highest standards for ethics and integrity."

Earlier this month, Republicans pressed the FBI director at a Senate hearing over Thibault's social media postings, which Wray said were "deeply troubling."

Wray was questioned about Thibault's social media activity by Sen. John Kennedy, a Louisiana Republican, who said that Thibault was on leave. While Wray said he couldn't comment on "ongoing personnel matters," he noted Thibault was in his position at the FBI's Washington field office "until relatively recently."

"I want to be very careful not to interfere with ongoing personnel matters. I should say that when I read the letter that describes the kinds of things that you're talking about, I found it deeply troubling," Wray said.

CNN reported last month that investigators are at a critical juncture in their probe of Hunter Biden's business dealings, weighing possible charges against the president's son and attempting to abide by the department's longstanding guidelines to avoid bringing politically sensitive cases close to an election. Hunter Biden has previously denied any wrongdoing.

Among the examples Grassley cited in his letter to Wray and Garland, Thibault retweeted a statement from an anti-Trump GOP group saying, "Donald Trump is a psychologically broken, embittered, and deeply unhappy man." He also responded to a tweet from GOP Rep. Liz Cheney of Wyoming by saying, "Your dad was a disgrace."

"Mr. Thibault's blatant partisanship undermined the work and reputation of the FBI," Grassley said in a statement on Thibault's retirement. "Political bias should have no place at the FBI, and the effort to revive the FBI's credibility can't stop with his exit. We need accountability, which is why Congress must continue investigating and the inspector general must fully investigate as I've requested."

Last month, Grassley wrote that whistleblowers had come to his committee alleging that in 2020, Thibault had "reportedly ordered the closure of a stream of information related to Hunter Biden."

"The FBI headquarters team allegedly claimed that reporting from the stream was at risk of disinformation. However, whistleblowers claim that all of the information obtained through that stream was already verified or verifiable," Grassley wrote.

Wray was asked about Thibault's involvement in the Hunter Biden investigation during this month's Senate Judiciary Committee hearing, responding that the probe was being run out of the FBI's Baltimore Field Office, working with the Delaware US attorney, David Weiss, who was held over from the Trump administration.

"In particular, Mr. Thibault was not involved in any decisions related to any laptop that may be at issue in that investigation, and he did not seek to close the investigation," the lawyers said in the statement.