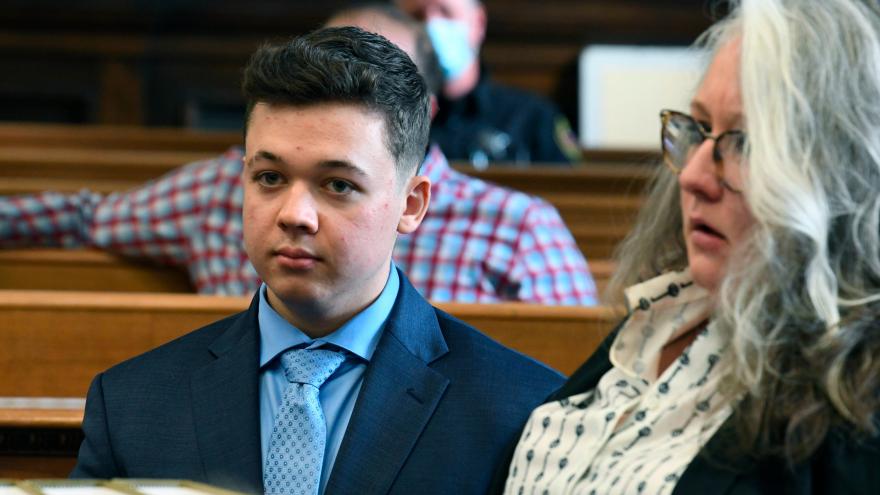 The infrared video, grainy and shot from 8,500 feet overheard, shows Rittenhouse hustling along a sidewalk and passing Rosenbaum, who is positioned next to a cluster of parked cars.

The video shows the two stop and interact, and Rosenbaum, who was unarmed, then begins to run toward Rittenhouse, who is armed with a rifle. Rittenhouse, then 17, runs away from Rosenbaum before the teenager ultimately turns and shoots him four times, the video shows.

In opening statements, the prosecution said evidence would show Rittenhouse chased down and fatally shot Rosenbaum, 36, and then shot at three other people who tried to confront what they believed to be an active shooter. However, Richards said Rittenhouse acted in self-defense, describing Rosenbaum as the aggressor and the others as part of a "mob."

Most of the facts of what happened that night are not up for debate -- rather, the heart of the trial is the analysis of Rittenhouse's actions and whether they can be considered "reasonable."

The violence in Kenosha, a city of about 100,000 people, came amid a tense summer of protests and unrest as masses of people denounced how American police treated Black people. On August 23, 2020, a Kenosha police officer shot Jacob Blake, a 29-year-old Black man, multiple times in the back. The ensuing public anger led to incidents of violence and destruction that night and the next night, pushing some people to arm themselves and take the community's safety into their own hands.

Rittenhouse fired an AR-15-style weapon eight times in all during the unrest: four shots at Rosenbaum, who was unarmed; two shots at an unarmed unknown individual who kicked Rittenhouse; one fatal shot at Anthony Huber, who hit Rittenhouse with a skateboard; and one shot at Gaige Grosskreutz, who was holding a gun, according to prosecutors.

Rosenbaum and Huber, 26, were killed, and Grosskreutz, now 27, was wounded.

The new FBI aerial video was shown in court during testimony from Kenosha Police Det. Martin Howard, the lead investigator on the case.

In the video, Rittenhouse is moving rapidly along a sidewalk by himself. The sidewalk leads to a parking lot, where Rosenbaum is positioned next to a cluster of parked cars.

Richards, Rittenhouse's attorney, alleged that Rosenbaum was in the parking lot setting a Duramax on fire.

"As Kyle (Rittenhouse) ... comes to the Duramax, this individual, Mr. Rosenbaum, begins to come out of his hiding place," said Richards, pointing to Rosenbaum in the video.

Richards argued that Rosenbaum "was in hiding" as Rittenhouse arrived at the parking lot, which Howard confirmed.

Rittenhouse slows down in the video, and there appears to be some kind of exchange, but there is no audio of the moment.

"And it does not dissuade Mr. Rosenbaum, correct?" Richards said.

Rittenhouse continued to move in the same direction he was moving previously, and Rosenbaum starts to chase Rittenhouse. Videos taken of the scene from other witnesses show Rosenbaum threw a plastic bag at Rittenhouse but he was otherwise unarmed.

These other videos also show that a different person fired a gunshot in the air seconds before Rittenhouse fatally shot Rosenbaum.

That initial shot was fired by Joshua Ziminski, Howard testified. Afterward, Rittenhouse fired four times at Rosenbaum. There were another three shots afterward, the videos show, but Howard said investigators still do not know who fired those.

Ziminski, 36, has separately been charged with disorderly conduct using a dangerous weapon, arson and obstructing an officer, and he has pleaded not guilty, court records show. A criminal complaint says he admitted to firing a "warning shot" in the air that night.

The videos, some of which were graphic, came from different angles and from a variety of witnesses at the scene.

The first batch of videos showed the first shooting in which Rosenbaum chased Rittenhouse and threw a bag at him. A gunshot then went off, and Rittenhouse then shot Rosenbaum four times. Prosecutors showed graphic video of Rosenbaum lying on the ground with a head wound as people tried to provide medical aid.

While the video was playing in the courtroom, Rittenhouse's head was pointed downward, not watching the video.

Prosecutors then played different videos of people who pointed out Rittenhouse as he ran from the shooting scene and yelled that he had just shot a man. A crowd started to chase Rittenhouse, who fell and then fired four more rounds, the videos show.

In one video, taken earlier in the night by Daily Caller editor Richie McGinniss, Rittenhouse said he was out on the streets serving as a medic and that the other armed individuals were there to protect him.

"Our job is to protect this business and part of my job is to also help people," Rittenhouse said. "If there's somebody hurt, I'm running into harm's way. That's why I have my rifle, because I need to protect myself obviously. I also have my med kit."

Koerri Washington, who live-streamed the unrest in Kenosha last August, testified at the start of Wednesday as prosecutors played a video he took on the night of the shootings. He testified that Rosenbaum had been acting "erratic" and Rittenhouse was chain smoking and appeared nervous that night.

Det. Howard testified that he examined Rittenhouse when he turned himself in the day after the shootings.