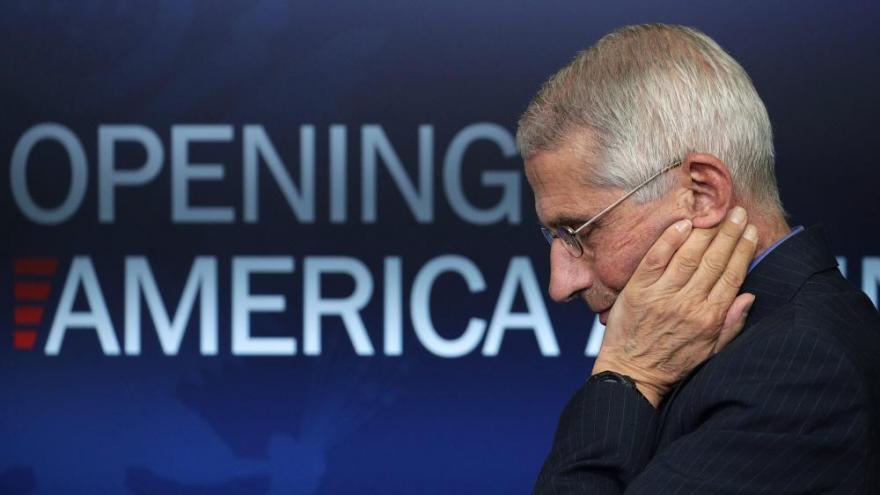 (CNN) -- Dr. Anthony Fauci, director of the National Institute of Allergy and Infectious Diseases, expressed support for the World Health Organization on Thursday in a significant break from President Donald Trump, who announced last month that the US would terminate its relationship with the world's leading public health body.

"I've been dealing with the WHO now for four decades. I have a number of colleagues I have interacted with and continue to. I have a very good relationship with the director general of WHO," Fauci told CBC News. "The WHO is an imperfect organization. It certainly has made some missteps, but it has also done a lot of good. The world needs a WHO."

Trump's decision to end the US' relationship with the WHO amid a global pandemic drew quick criticism from both sides of the aisle. His move followed a years-long pattern of skepticism of world organizations, with the President claiming in nearly every circumstance that the US was being taken advantage of.

"Because they have failed to make the requested and greatly needed reforms, we will be today terminating our relationship with the World Health Organization and redirecting those funds to other worldwide and deserving, urgent global public health needs," Trump said last month.

But Fauci said Thursday, "I would hope that we would continue to benefit from what the WHO can do -- at the same time that they continue to improve themselves."

His comments echo the message from the director of the US Centers for Disease Control and Prevention, Dr. Robert Redfield, who said last week that his agency continues to collaborate closely with WHO, despite Trump's statements.

"I feel confident that the public health partnership that we have -- although it may be modified in some way at a political level -- I don't think it's going to be modified in terms of our public health efforts," Redfield said during a House Appropriations hearing on the Covid-19 response.

The WHO has been criticized for relying on official Chinese government figures relating to the coronavirus, numbers that many officials doubt are accurate. It also received criticism for a January 14 tweet noting that preliminary investigation by Chinese authorities had found no clear evidence of human-to-human transmission of the virus.

Critics have also questioned whether the WHO is independent enough, given China's rising wealth and power. They point to the WHO's effusive praise of China's response to the pandemic.

But health experts, US lawmakers and world leaders have expressed concern over defunding the organization amid a pandemic.

"COVID-19 affects us all and does not respect borders; defeating it requires the entire world working together," Harris said in a statement. "In the strongest terms possible, the American Medical Association urges the President to reverse course and not abandon our country's leadership position in the global fight against COVID-19."