Fauci: 'I would take whatever vaccine would be available to me' 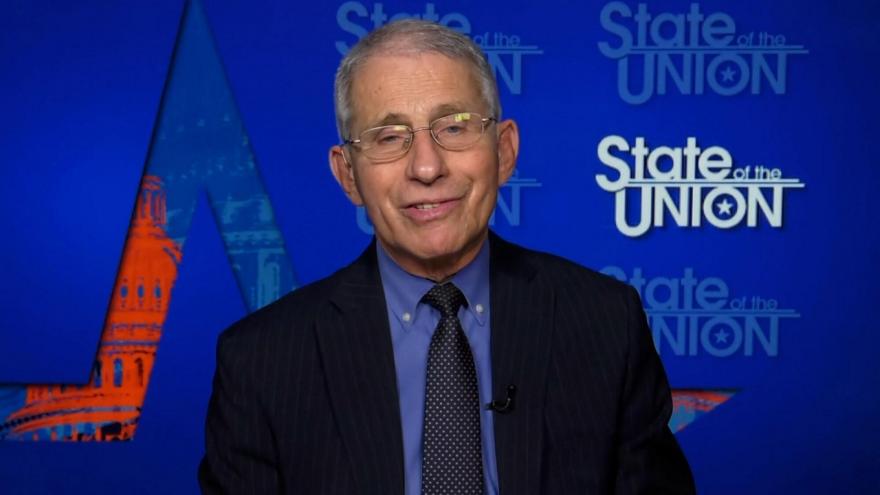 Dr. Anthony Fauci on Sunday urged Americans to take any of the three "highly efficacious" coronavirus vaccines now available to them and not delay getting one vaccine over another.

(CNN) -- Dr. Anthony Fauci, the nation's top infectious disease expert, on Sunday urged Americans to take any of the three "highly efficacious" coronavirus vaccines now available to them and not delay getting one vaccine over another.

His comments come after the US Food and Drug Administration on Saturday authorized Johnson & Johnson's Covid-19 vaccine, adding a third vaccine option for Americans.

"These are three highly efficacious vaccines. I can tell you I have been fully vaccinated with one that was available. It was the Moderna," he told CNN's Dana Bash on "State of the Union." "If I were not vaccinated now and I had a choice of getting a J&J vaccine now or waiting for another vaccine, I would take whatever vaccine would be available to me as quickly as possible for the simple reason of what I said a moment ago, we want to get as many people vaccinated as quickly and expeditiously as possible."

The Johnson & Johnson vaccine is the first single dose Covid-19 vaccine available in the US and is considered 72% effective specifically for the US and offered 86% protection against severe forms of the disease in the country. The vaccine was tested in more than 44,000 people in the US, South Africa and Latin America. Globally, it was 66.1% effective against moderate to severe/critical Covid-19 at least four weeks after vaccination, according to an FDA analysis.

But while Fauci and health experts have touted the vaccine's efficacy against the virus, there is some concern among Americans about its efficacy compared to vaccines from Pfizer and Moderna that are about 95% protective.

"You can understand that type of a concern, but in order to really compare vaccines, you have to compare them head-to-head and these were not compared head-to-head," Fauci told Bash.

And while the initial supply of the Johnson & Johnson vaccine is limited -- the company says it only has about 4 million doses of its vaccine ready to ship "immediately" -- it should have 20 million ready by the end of March.

The US Centers for Disease Control and Prevention Advisory Committee on Immunization Practices, known as ACIP, will meet on Sunday to set the guidelines for who should get the vaccine. Their vote is scheduled for 3 p.m. ET.

The J&J vaccine comes as new variants of Covid-19 are circulating in the US, one of them in New York City, that is concerning researchers.

Researchers had told the VRBPAC committee that the Johnson & Johnson vaccine was tested at a different time -- when more virus was circulating and after new variants had arisen that have the ability to evade some of the immune response. Although they were not able to show that these variants were responsible for the apparent lower efficacy of Johnson & Johnson's vaccine, they told the committee it could have been a factor.

The Pfizer and Moderna vaccines have shown to protect against some variants, but the companies are also racing to get ahead of virus variants by testing new booster and variant-specific vaccines.

Viruses mutate all the time. The more people who are infected, and the longer they are infected, the more chance the viruses have to change. But sometimes a mutation or pattern of mutations takes hold and gets passed along. If viruses with such patterns become more common, they're called variants.

Fauci said Sunday the variants should be taken seriously and the best way to address the variants is to not only continue public health measures, but to also vaccinate as many people as possible "because even when you have variants, the vaccines will be important in preventing the spread."

"You get variants when the virus has sort of like a complete field of going wherever it wants to go because the people are vulnerable. If you prevent that by public health measures and vaccination, you'll dampen the effect of these variants," he said.

Some states, including New York and Virginia, have begun to ease some Covid-19 restrictions as vaccinations increase. But health experts, including CDC Director Rochelle Walensky, have warned it may be too soon.

There is concern around a recent stall in the decline of Covid-19 cases and hospitalizations in the United States -- which appears now to be "leveling off," Walensky warned during a White House briefing on Friday.

"Over the last few weeks, cases and hospital admissions in the United States have been coming down since early January and deaths had been declining in the past week," Walensky said. "But the latest data suggest that these declines may be stalling, potentially leveling off at still a very high number. We at the CDC consider this a very concerning shift in the trajectory."

Fauci agreed, saying Sunday that the move to relax restrictions is "risky" as new variants continue to spread.

"If you look at that little plateau, particularly in the arena of having variants such as we have in California and such as we have in New York, it is really risky to say 'it's over, we're on the way out, let's pull back' because what we can see is that we turn up," he said. "It isn't hypothetical, Dana, because just look historically at the late winter, early spring of 2020 ... summer of 2020 when we started to pull back prematurely, we saw the rebound."