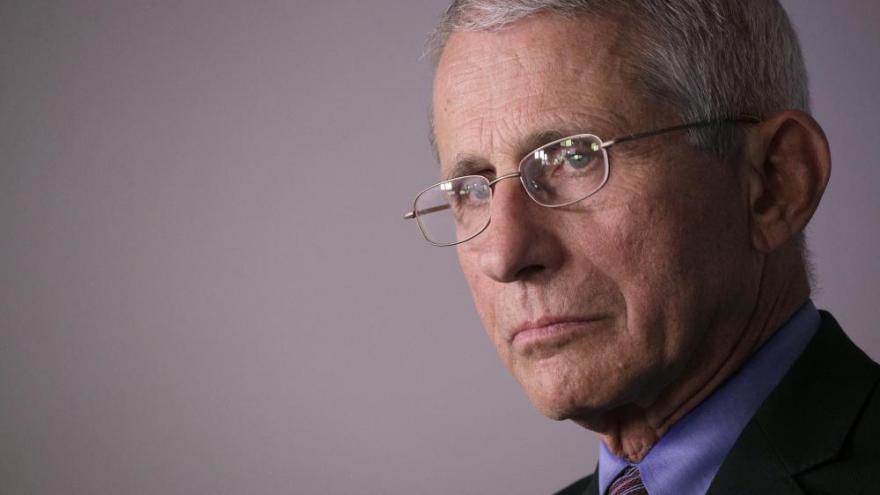 National Institute of Allergy and Infectious Diseases Director Anthony Fauci attends the daily coronavirus briefing in the Brady Press Briefing Room at the White House on April 09, 2020 in Washington, DC.

(CNN) -- President-elect Joe Biden said Thursday that he had asked Dr. Anthony Fauci earlier in the day to stay on in his role and to be a chief medical adviser in Biden's incoming administration.

"I asked him to stay on in the exact same role he's had for the past several presidents, and I asked him to be a chief medical adviser for me as well, and be part of the Covid team," Biden told CNN's Jake Tapper in the first joint interview of Biden and Vice President-elect Kamala Harris since being elected.

Biden added that Ron Klain, the incoming White House chief of staff, knew Fauci well and had been talking to him "all the time." Speaking on NBC's "Today" show Friday morning, Fauci said he accepted the offer "right on the spot."

Fauci previously told CNN that he had worked "very closely" with Klain during the Ebola outbreak when Klain was tasked with coordinating the Obama administration's response to the crisis. He praised Klain as an "excellent choice" for White House chief of staff and said he was "absolutely terrific at the Ebola situation, where we had a very successful ultimate endgame with Ebola."

Fauci told CNN later Thursday that he had an hour-long meeting at the White House that day with Biden's agency review team. Team members who met with Fauci with included Jeffrey Zients, Biden's choice for coronavirus czar, as well as two co-chairs of Biden's 12-member coronavirus advisory board: Dr. David Kessler, the former commissioner of the US Food and Drug Administration, and former US Surgeon General Dr. Vivek Murthy.

Among the topics they discussed were vaccine distribution and the state of the pandemic, according to Fauci, who said it was a good meeting and that it is "the way transition should work."

According to the Biden-Harris transition website, "Agency review teams are responsible for understanding the operations of each agency, ensuring a smooth transfer of power."

CNN reported earlier in the day that Fauci, the director of the National Institute of Allergy and Infectious Diseases and a member of President Donald Trump's coronavirus taskforce, had a planned meeting with Biden's transition team.

Fauci had initial conversations with Biden aides, including Klain, in recent days as part of the infectious diseases expert's expected role in the Biden administration.

The plans for the meeting was first reported by CBS.

The meeting -- which was scheduled to take place at 2 p.m. with Biden's "landing team" assigned to the National Institutes of Health -- came one day after the US reported its highest one-day coronavirus death tally and as health care officials say their staff and facilities are struggling to supporting the rising number of patients. More than 2,800 Covid-19 deaths were reported on Wednesday. The number of Covid-19 patients in US hospitals Wednesday also is the highest reported on a given day during the pandemic — 100,226, according to the COVID Tracking Project.

One of Biden's most urgent priorities when he takes office on January 20 will be to contain the coronavirus pandemic, which has killed more than 273,000 Americans as of Thursday morning, and to oversee the national distribution of a vaccine when one becomes available.

Fauci, who has a lengthy career serving under six presidents from both parties, is a leading member of President Donald Trump's White House coronavirus task force. He has served as the director of the National Institute of Allergy and Infectious Diseases since 1984.

The infectious disease expert has been critical of the Trump administration's response to the pandemic. He told The Washington Post in October that the United States needed to make an "abrupt change" in public health practices and behaviors, and said that the White House coronavirus task force meets less frequently and has far less influence as Trump and his advisers have focused on reopening the country. He was also critical of Scott Atlas, a neuroradiologist with no training in the field of infectious disease, who the President has relied on for advice on handling the pandemic. Atlas recently resigned from his post in the Trump administration.

Since the pandemic began, Trump has undercut his own medical experts and sidelined scientists. The President has refused to take basic steps to control the virus, notably declining to wear a mask in public for several months and holding large rallies with no social distancing.

Biden, by contrast, has long pledged to listen to the advice of scientists and public health experts about the pandemic. He has worn a mask at public events and stressed the importance of adhering to public health guidelines.

The President-elect's first major announcement after being projected the winner of the election was to announce a 12-member coronavirus advisory board to guide him during the transition. Among the group of public health experts is Rick Bright, a whistleblower from the Trump administration who alleged that his early warnings about the pandemic were ignored and ultimately led to his removal.

The task force is chaired by Murthy, Kessler and Yale University's Dr. Marcella Nunez-Smith. Among the other 13 members are Dr. Luciana Borio, a senior fellow for global health at the Council on Foreign Relations, and Dr. Zeke Emanuel, one of the architects of the Affordable Care Act and an ex-Obama administration health adviser.

This story has been updated with additional background about the coronavirus pandemic and Fauci, as well as comments made by Biden in a Thursday CNN interview.