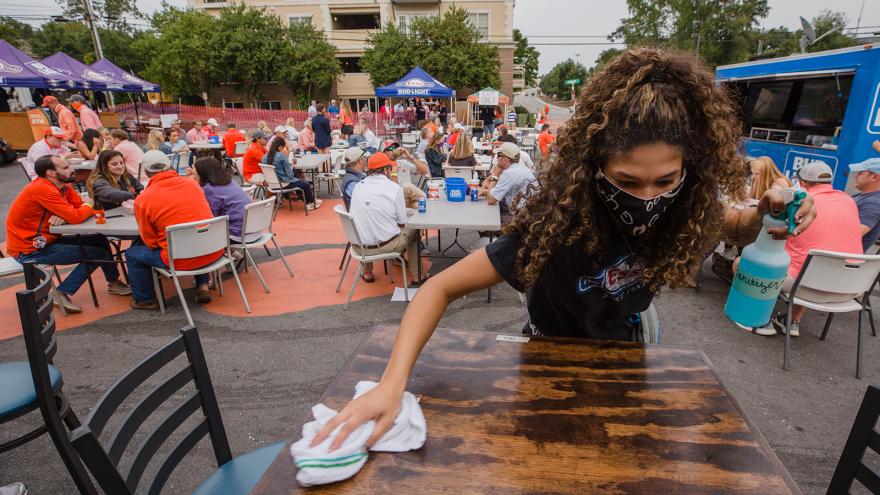 (CNN) -- Dr. Anthony Fauci said Thursday that even an effective Covid-19 vaccine won't replace the need for other public health measures, such as wearing a mask, social distancing and washing hands.

Fauci, the director of the National Institute of Allergy and Infectious Diseases, said the vaccine will not be 100% effective and taken by 100% of the population -- which means there still will be room for Covid-19 to spread.

Fauci said he's being "practical" when he says, "I think if we can get 75 to 80% of the population vaccinated, I think that would be a really good accomplishment."

"It is not going to eliminate the need to be prudent and careful with our public health measures," he said in a Facebook Live conversation with New Jersey Gov. Phil Murphy.

Another reason to wear a mask: "There's good enough data to say that aerosol transmission does occur," Fauci told Murphy, meaning the virus can hang around in the air "for a period of time," instead of falling to the ground in larger droplets.

The Centers for Disease Control and Prevention is updating its guidance on airborne transmission of coronavirus after posting new recommendations Friday, only to revert to its earlier guidance Monday. The new message was posted in error, the CDC said.

While a timeline for when a vaccine will be widely available remains unclear, National Institutes of Health Director Dr. Francis Collins says two more Phase 3 vaccine trials will likely start "in the next month or month and a half."

Sources say the US Food and Drug Administration is considering new rules for authorizing a Covid-19 vaccine. One source said the FDA is expected to tell vaccine makers they need to wait two months after giving all their study participants their second doses of the vaccine before applying for emergency use authorization.

The FDA is "providing clarity" by adding to its earlier guidance, FDA commissioner Stephen Hahn said in a radio interview.

"We're trying to give manufacturers a sense of what would need to be seen in order to assure our scientists and then the American people that the vaccine is safe and effective," Hahn said in an interview with WPHT's "The Rich Zeoli Show."

"This is evolving," Hahn added. "We haven't seen the data from the clinical trials, and we won't until they come to us."

According to Fauci, a "large proportion" of the US will not be vaccinated against Covid-19 this year.

"We're not going to have all of the doses available, for example, by the end of December, they will be rolling in as the months go by," Fauci said. "By the time you get to maybe the third or fourth month of the 2021, then you'll have doses for everyone," he said Wednesday.

Those prioritized for the vaccine will likely be health care providers, people with underlying conditions and vulnerable populations, he said.

Fauci's comments were made as nearly half of US states now report a rise in new Covid-19 cases. In addition, Centers for Disease Control and Prevention Director Dr. Robert Redfield said preliminary results on the first round of a CDC study show more than 90% of the population -- or more than 295 million Americans -- is susceptible to the virus.

Redfield spoke at the Senate Health Committee on Wednesday along with several other leading coronavirus political figures, including Fauci, testing czar Adm. Brett Giroir and the FDA's Hahn.

Together, the group advocated for a fact-based response to the pandemic and pushed back against concerns that the vaccine approval process would be hampered by political interference.

"We do feel the urgency of the moment. We do take very much.... very seriously our responsibility to protect American lives," Hahn said. "We will not delay, but we will not cut corners in our process."

On Thursday, Hahn vowed that it would be scientists who determine a vaccine's fate.

"Our experts, who know about vaccines, will make this determination, and it'll be only based upon the science and the data, not politics. That's my pledge," Hahn said in the radio interview.

President Donald Trump stomped on a united front by claiming he may override the FDA if the agency released tougher standards for the authorization of a vaccine.

The presidents of the US National Academies of Sciences and Medicine called out political interference in science in a statement released Thursday, saying they are "alarmed" by recent reports of the politicization of science.

"We find ongoing reports and incidents of the politicization of science, particularly the overriding of evidence and advice from public health officials and derision of government scientists, to be alarming," the statement said.

21 states report an increase of cases

More than 6.9 million people across the country have already contracted the illness and more than 202,000 people have died since the start of the pandemic, according to Johns Hopkins University.

The US continues to lead the world in both deaths and infections and now experts warn that the spread of the virus could get much worse with schools now open and flu season on its way.

At least 21 states -- mostly across the US heartland and Midwest -- are reporting an increase in new Covid-19 cases compared to the previous week. Nationwide, the US is averaging more than 43,000 new cases per day -- about double what the country was averaging back in June when lockdown restrictions were easing.

Researchers with the University of Washington's Institute for Health Metrics and Evaluation predict a total of more than 378,000 Americans will have died from Covid-19 by January 1.

20% of summer Covid-19 cases were in young people

Warnings from experts have remained the same for months: wear a mask, wash your hands, social distance and avoid crowded places.

Over the summer, many of those warnings targeted younger groups, after public health officials and state leaders said young people were helping drive a surge of new cases.

"I don't want to seem preachy about it," Fauci told Gov. Murphy during their Facebook Live on Thursday. "But right now the infections in the country are driven more by young people, 19 to 25."

A new report from the CDC now shows people ages20 to 29 accounted for more than 20% of all confirmed Covid-19 cases between June and August.

In June, Southern states saw an increase in positive tests among 20 to 39-year-olds a little more than eight days before increases among those 60 or older were reported -- suggesting younger adults drove community spread of the virus.

The CDC noted younger people are more likely to work front line jobs that leave them exposed and they may be less likely to heed social distancing guidelines. And because younger groups are more likely to have milder symptoms or show no symptoms at all, they could have been spreading the virus without ever knowing.

That's also what some experts have cautioned could happen if students go back home from college campuses and unknowingly bring the virus with them. More than 59,000 Covid-19 cases have been reported in colleges and universities in all 50 states.