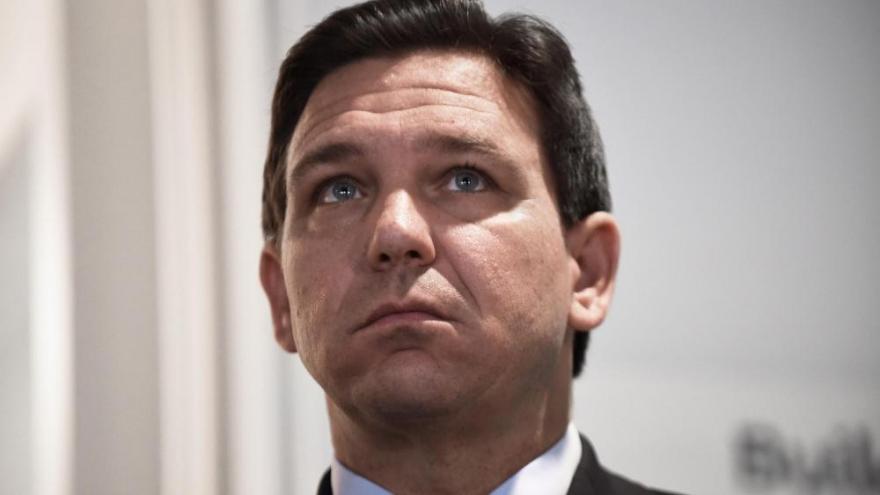 (CNN) -- Gov. Ron DeSantis has a new message to Dr. Anthony Fauci for Republicans to spread across Florida's beaches.

"Fauci Can Pound Sand," it says on the soles of sandals now available for purchase on DeSantis' campaign website. While shopping, DeSantis supporters can also buy "Don't Fauci My Florida" beer koozies. Perhaps they were directed to his site from a recent DeSantis campaign email, subject line: "Fauci for Prison."

In the absence of a clear political opponent at the onset of his campaign for reelection, DeSantis seems to have created one out of the 81-year-old doctor from Brooklyn and Biden chief medical adviser. Beyond campaign merchandise and fundraising pitches, Fauci figures prominently in most of DeSantis' public remarks.

Restaurants were left to "wither on the vine" because of Fauci, DeSantis said to students at a state college in January. Fauci shouldn't have trusted the Chinese's coronavirus data, DeSantis recently told a conservative podcast. "We choose freedom over Fauci," he asserted to business leaders in November.

DeSantis has turned Fauci into an adjective ("Faucian dystopia") and a political doctrine ("Faucism").

For DeSantis, Fauci is a convenient shorthand for the pandemic mitigation measures that he has fought against as governor, such as masks, vaccine mandates and managed shutdowns. DeSantis has gained more attention than perhaps any Republican leader in the country by flouting the scientific community's advice and keeping Florida open, earning him a spot atop the list of future GOP presidential contenders.

As he runs for a second term, DeSantis has only intensified his resolve against coronavirus-related restrictions and, by extension, the country's top infectious disease expert, going so far as to suggest that Fauci should be prosecuted for allegedly lying to Congress.

US Rep. Charlie Crist, who is running in the Democratic primary to challenge DeSantis in November, said the treatment of Fauci was "beneath the office of the governor."

"I think it's pretty sad to be candid," Crist said. "Dr. Fauci is a guy that is trying to guide the country through a pandemic that we're all suffering through, save lives and reduce infections. Our governor's response is to mock him and make fun of him. It's not how a governor should comport himself."

Agriculture Commissioner Nikki Fried and state Sen. Annette Taddeo are also running for the Democratic nomination, which will be determined in an August primary. DeSantis has rarely mentioned any of the Democratic contenders on the campaign trail or in his public remarks.

Notably, it was Fauci, not President Joe Biden or his would-be Democratic opponents, who DeSantis called out in his recent State of the State address when he labeled school closures and vaccine mandates "Faucian declarations."

DeSantis is far from the only Republican that has attacked Fauci for political gain. The most extreme rhetoric from the right has compared Fauci to Nazi doctor Josef Mengele, who tortured and experimented concentration camp prisoners. At a Senate hearing on Covid-19 last month, Fauci accused Republican Sen. Rand Paul of Kentucky of campaigning off of lies about the doctor and warned that the attacks have led to "threats upon my life, harassment of my family and my children with obscene phone calls." Fauci has been assigned his own security detail since April 2020.

But DeSantis is alone among elected Republicans in building a merchandising machine around assailing Fauci. His political committee, Friends of Ron DeSantis, has spent $560,000 since August on inventory for its online store.

His committee raised eyebrows when he started selling "Don't Fauci My Florida" T-shirts and koozies last July, prompting widespread scorn or praise along predictable partisan lines. Within weeks of the items hitting the market, Florida became the national epicenter of the country's outbreak of the Delta variant. At its peak in September, 350 people were dying a day in Florida.

Florida is approaching 65,000 deaths from coronavirus after its latest surge in hospitalizations amid the Omnicron variant. The state ranks 18th in deaths per capita.

Asked in August by CNN's Jake Tapper about the apparel, Fauci said, "There's no place for that when you're dealing with a public health crisis."

"Whoever is attacking me, it's just a reflection of the politicization of what should be a purely public health issue and it's really unfortunate," Fauci said. "They're attacking personally me because I'm a visible person, but I'm merely articulating the proper public health practices that are recommended strongly by an organization and that organization is the CDC."

The DeSantis campaign did not respond to a request for comment.

Last month, hundreds of leading American doctors and scientists signed on to a letter calling for the personal attacks on Fauci to end.

"The criticism is inaccurate, unscientific, ill-founded in the facts and, increasingly, motivated by partisan politics. It is a distraction from what should be the national focus -- working together to finally overcome a pandemic that is killing about 500,000 people a year," wrote the group, which included dozens of Nobel laureates and Dr. Bill Frist, a former Senate Republican leader from Tennessee.

Sen. Marco Rubio, a fellow Florida Republican, told Fox News last year that he thought the koozies were "funny," and asserted that Fauci had earned the public criticism.

"There's this notion out there that somehow Fauci is above reproach," Rubio said. "Fauci has openly and enthusiastically engaged himself in the political debate of this country."

Two years ago, Fauci was far from a household name, but was a respected physician-scientist who had served as the director of the National Institute of Allergy and Infectious Diseases since 1984. When Covid 19 arrived in the United States, he was thrust into the spotlight as a key member of then-President Donald Trump's White House coronavirus task force and became a trusted voice of reason and reality during a time of uncertainty.

DeSantis and Fauci butted heads early on. As Covid-19 began to rapidly spread in the US in March 2020, Fauci stated that Florida was experiencing community spread of the virus and not just isolated cases, which DeSantis disputed. A month later, with DeSantis readying to reopen schools ahead of the rest of the country, Fauci publicly warned against it.

But DeSantis largely kept his criticism in check while Fauci worked for Trump, a close ally of the governor's. That changed when Biden took office.

"When it came right down to it, we chose freedom over Faucism," DeSantis told a Republican gathering in the key swing state of Pennsylvania during a May 2021 speech, a line he continues to regularly use.

Overall, as the pandemic has dragged on and Republicans and Democrats have grown even more at odds over masks and vaccines, Fauci has become a polarizing figure. A December Gallup poll found 52% approved of Fauci compared to 47% who said they disapproved. While 85% of Democrats gave Fauci high marks, the poll found just 19%of Republicans said they approved of him. Independents were more evenly divided. Kevin Cate, a media consultant working for Fried, said only a "small, hateful partisan" would politicize a scientist during a pandemic. He said he was not worried that voter sentiments about Fauci would have any bearing on the campaign.

"There's only so many things you can control," Cate said. "The environment — whether it's the stock market, jobs, 401ks, the virus — none of these things are in the control of Nikki Fried."

DeSantis has capitalized on the discontent with Fauci among Republicans to expand his growing national brand and bring more dollars into his reelection bid, which already has $72 million between his campaign and political committee.

The Fauci sandals were introduced to social media with a video that cut together clips of alleged Fauci "flip-flops" on pandemic policies. On Tuesday, the conservative One America News Network ran the digital video in its entirety, including instructions on how to pre-order the sandals, prompting an advertising tracking service to erroneously flag the content as a campaign commercial.

DeSantis campaign spokesman Dave Abrams said the campaign did not pay for the ad and characterized OAN's treatment of the 60-second video as "covering campaign content."

Taddeo, who posted a daily tweet last year counting how many Floridians died after DeSantis' committee began selling anti-Fauci gear, said the governor's latest attack on Fauci is hypocritical. She noted that DeSantis, too, has changed his pandemic strategy after first closing schools, shutting down bars and allowing local governments to implement mask requirements.

"There have been a lot of things that we've been learning along the way, including DeSantis. He loves to talk about how Florida is open for business and likes to avoid the fact that we did close," Taddeo said. "Even he had to learn.