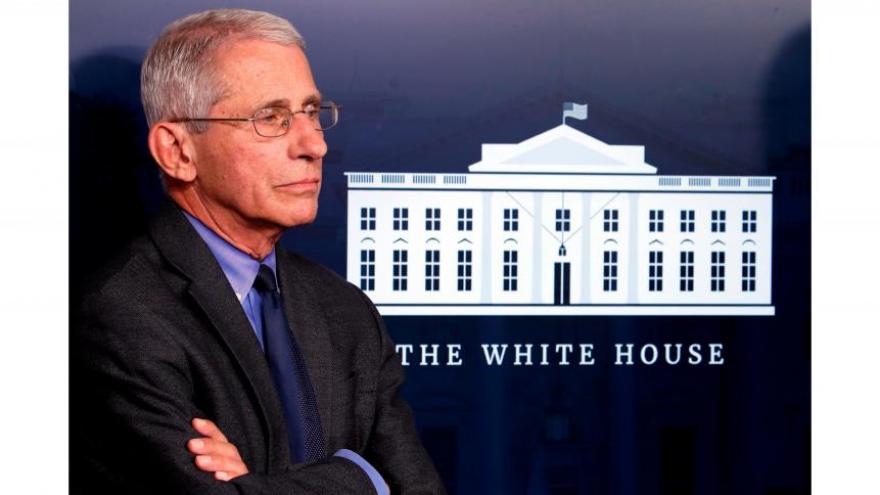 Dr. Anthony Fauci, director of the National Institute of Allergy and Infectious Diseases, said that calls to implement life-saving social distancing measures faced "a lot of pushback" early in the US coronavirus outbreak and that the country is now looking for ways to more effectively respond to the virus should it rebound in the fall.

(CNN) -- Dr. Anthony Fauci said Sunday that calls to implement life-saving social distancing measures faced "a lot of pushback" early in the US coronavirus outbreak and that the country is now looking for ways to more effectively respond to the virus should it rebound in the fall.

"I mean, obviously, you could logically say that if you had a process that was ongoing and you started mitigation earlier, you could have saved lives," Fauci, the nation's top infectious disease expert, told CNN's Jake Tapper on "State of the Union" when asked if social distancing and stay-at-home measures could have prevented deaths had they been put in place in February, instead of mid-March.

"Obviously, no one is going to deny that. But what goes into those decisions is complicated," added Fauci, who is a key member of the Trump administration's coronavirus task force. "But you're right, I mean, obviously, if we had right from the very beginning shut everything down, it may have been a little bit different. But there was a lot of pushback about shutting things down back then."

Asked why the President didn't recommend social distancing guidelines until mid-March -- about three weeks after the nation's top health experts recommended they be put in place -- Fauci said, "You know, Jake, as I have said many times, we look at it from a pure health standpoint. We make a recommendation. Often, the recommendation is taken. Sometimes it's not. But we -- it is what it is. We are where we are right now."

The comments from Fauci come a day after a report from The New York Times detailed the Trump administration's missteps in the early days of the pandemic and how President Donald Trump ignored his advisers' warnings of the potentially deadly disease.

An administration official separately confirmed to CNN that the government's top public health experts agreed in the third week of February on the need to begin moving away from a containment strategy and toward a mitigation strategy that would involve strong social distancing measures. The agreement among the health officials came after they held a tabletop exercise to game out the potential for a full-blown pandemic.

According to the Times report, Dr. Robert Kadlec, the top disaster response official at the Department of Health and Human Services, convened the White House coronavirus task force on February 21. During his meeting, the group conducted a mock-up exercise of the pandemic that predicted 110 million infections, 7.7 million hospitalizations and 586,000 deaths.

The group "concluded they would soon need to move toward aggressive social distancing, even at the risk of severe disruption to the nation's economy and the daily lives of millions of Americans," but it took more than three weeks for Trump to enact such guidelines on March 16.

Fauci told Tapper that "there is always a possibility, as we get into next fall and the beginning of early winter that we could see a rebound," in the virus, but the lessons learned from the first iteration of it should help the US better respond to a potential new wave.

'Not going to be a light switch'

With health experts and some elected officials saying the US is starting to see the effectiveness of social distancing measures put in place last month, Americans are wondering when the country can begin to ease up on the guidance.

Fauci said Sunday that the process of returning to normal "is not going to be a light switch that we say, 'OK, it is now June, July' ... click -- the light switch goes back on."

Asked by Tapper when he thought that process could start, Fauci said he thinks "it could probably start at least in some ways maybe next month," but noted that it's "difficult" to make those types of predictions and officials are trying to open the country "appropriately."

Trump said Saturday night that he hopes to make a decision "fairly soon" on when to reopen the country amid the coronavirus pandemic, telling Fox News' Jeanine Pirro, "We have to bring our country back. So, I'll be making a decision reasonably soon, we're setting up a council now of some of the most distinguished leaders in virtually every field -- including politics, and business and medical -- and we'll be making that decision fairly soon."

But as Trump leans in to his desire to reopen the nation's economy by May 1, America's governors and mayors, who hold the power to enforce closures and who have often taken a far more aggressive posture on protecting public health, stand in his way.

The director of the Institute for Health Metrics and Evaluation said Sunday that if the social distancing measures and closures were relaxed on May 1, the country would see a rebound of coronavirus cases.

"We don't think the capability in the states exists yet to deal with that volume of cases and so by July or August we could be back in the same situation we are in now" if there was premature opening of the country, Dr. Christopher Murray said on CBS, adding that West Coast states that are further along in the pandemic will still need "weeks of closures" beyond the peak for the opportunity to conduct proper testing and contact tracing.

Relaxing closures and social distancing measures on a rolling basis, he said, poses a new set of questions that have not been addressed.

"Of course there's a big issue of states are on different timings of their epidemics, which we know is the case. How are they going to control importation from other states into their state?" Murray said.

The inconsistent state mitigation policies have also been a problem for the modeling of the pandemic, according to Murray, who said that "incomplete implementation of social distancing closures in many states (is) adding a degree of uncertainty."

The World Health Organization special envoy, Dr. David Nabarro, went a step further in an interview with NBC on Sunday, issuing an ominous warning about coronavirus, which has already infected more than 1,827,000 people worldwide.

"We're not so sure that it will come in waves in the way that influenza does," he said. "We think it's going to be a virus that stalks the human race for quite a long time to come until we can all have a vaccine that will protect us and that there will be small outbreaks that will emerge sporadically and they will break through our defenses."

Nabarro said it will be "key" for countries to "pick up cases as soon as they appear, isolate them and stop outbreaks from developing."

There are more than 530,000 confirmed cases of coronavirus in the US, and more than 20,600 Americans have died, according to a tally from Johns Hopkins University.

Today 83° Times of sun and clouds