'Fatigue is a factor': Political exhaustion weighs on voters in rural Wisconsin 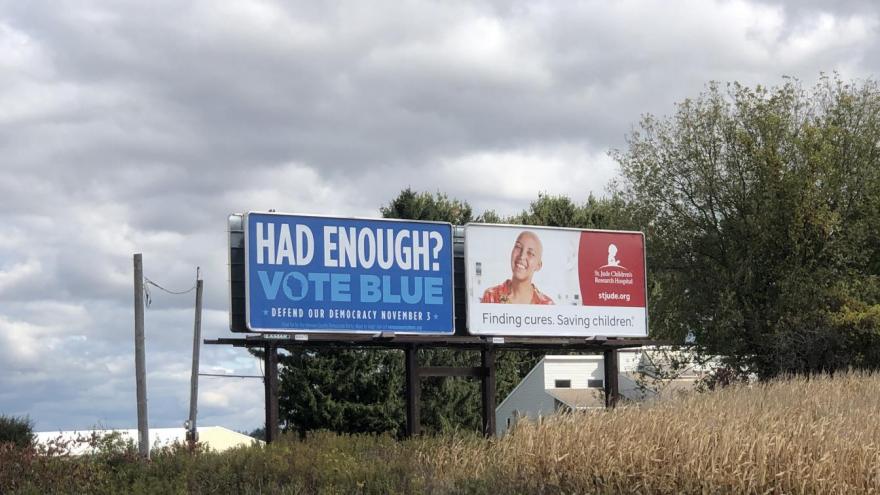 (CNN) -- In an electorate that agrees on little, there is one thing that nearly every voter here in Southwest Wisconsin feels: Exhaustion.

That fatigue with politics, aimed primarily at President Donald Trump but also Democrats in Washington and the overall tone of discourse in America, is coursing through the minds of many voters in one of the most politically volatile parts of this swing state, where counties that voted for Barack Obama in 2012 swung substantially to Trump in 2016 before swinging back to Democrats and Gov. Tony Evers in 2018.

Wisconsin played a central role in Trump's victory in 2016, with rural and working class voters leading the rejection of Democrats throughout the Upper Midwest. Four years later, however, the state remains a key battleground, but one where Trump is trailing in the most recent polls.

The hyper-partisanship that has consumed the rest of the nation has not missed the counties that lie along the Mississippi and Wisconsin rivers.

But exhaustion is one of the few things that crosses those hardened party lines. Even people who voted for Trump four years ago and top Republican operatives in the area told CNN that the chaos surrounding the President has left voters beleaguered weeks out from the 2020 election.

"Fatigue is a factor," said Wayde Lawler, the chair of the Vernon County Democratic Party.

The first presidential debate, which was dominated by Trump angrily yelling and interrupting and Democratic nominee Joe Biden firing back by calling Trump a "clown," did nothing but cement those feelings.

Looking to seize on this weariness, Lawler and the county party paid to have a large billboard put up between the towns of Viroqua and Westby that simply reads "Had Enough" in block letters before directing people to "Vote Blue" in November. The sign, flanked by a local fishing and hunting club, a John Deere dealer and fields of horses, is aimed at fed-up voters like Sharon Seeley.

The 79-year-old resident of nearby Grant County voted for Trump in 2016 but regrets it now, turned off by "his lies."

"It just makes you tired," Seeley said of Trump the day after the first debate. "He's like a kid in a candy store. If he can't have a piece, he breaks everything in the store."

Lawler said that sense of "exhaustion" is something he hears regularly from "folks that consider themselves pretty middle of the road," especially those who somewhat reluctantly voted for Trump four years ago because they harbored deep-seated animosity for Hillary Clinton.

"Most people don't want the ugliness of the political world to be front and center in their news every day and in their conversations and in their drive to work," he said. "A lot of people are just fed up with the constant barrage of whatever the scandal of the day is."

'The dipstick of the country'

The Southwest corner of Wisconsin that borders that state's eponymous river is known as the Driftless Area, because its rolling hills avoided the grinding flattening that receding glaciers imposed on much of the Midwest at the end of the last Ice Age. The area has long, according to local candidates, been home to high concentrations of ticket splitters, people who may vote for Democrats atop the ticket, but back Republicans in local races.

The area was also central to Trump winning Wisconsin four years ago, helping the Republican run up sizable margins in rural counties that had previously backed Democrats. The President remains popular with some voters in the area, where massive Trump signs are as common in fields here as Holstein cows.

Still, there are clear marks of Biden support, too. A number of Biden supporters have hand-painted campaign signs and placed many of them on the two-lane throughways that run alongside the Wisconsin River.

And despite its remoteness, local voters feel that issues impacting metropolitan areas still play out here.

"Richland Center is the dipstick of the country," Daniel Miller, the owner of Ocooch Books & Libations, said about the seat of Richland County. "Anything that is going on anywhere else is going on here in some ratio that is matching the country."

Because of that swingy nature, both Republicans and Democrats have committed more focus on the Driftless Area.

Trump, before he tested positive for Covid-19, was scheduled to headline an event in nearby La Crosse. Vice President Mike Pence has surprised Republicans in the state with how frequently he has targeted the western half of Wisconsin. And the Trump campaign says they have "more staff than ever before" in the area, including six field offices.

"The key for Republicans is keeping the focus a lot more on kitchen table issues, focused on taxes and health care and education and what we think we can do differently," said Andrew Hitt, the chair of the Wisconsin Republican Party, who grew up in Richland Center.

But Hitt admits that the area is up for grabs, in part, because of people are "exhausted" by politics.

"If Southwest Wisconsin looks more like an Obama map, it's going to be hard for the President to win," said Hitt. "If it looks like a Trump 2016 map and everything else kind of stays about where it is, then that that means the President is probably going to win (the state) again."

For Ben Wikler, chair of Wisconsin Democrats, it is that exhaustion that is central to winning back these counties.

Exhaustion "tends to be the recipe for change elections," said Wikler. "When people don't like what they are getting, that is when they will vote for something else."

Wikler, in a nod to that Vernon County billboard, labeled people like this the "had enough" voter -- "people who don't want politics to dominate their every waking moment," he said.

And although people like Bill Biefer, chair of the Grant County Republican Party, said excitement for the President remains high among his supporters, he admitted there are clear signs that some voters are just worn out with politics.

"It is exhausting to put up with all the complete bickering that is going on for four years," said Biefer. "This constant getting nothing done. I don't think it is helping any party."

Because of the coronavirus, Shaun Murphy-Lopez is one of the only Democrats in Wisconsin knocking on doors.

He must, he says, to even have a chance of winning a state assembly seat in a district that runs from Wisconsin's border with Illinois and Iowa up through Richland County.

But what he has learned is that the reason Biden -- and by extension, he -- has any chance of winning in November is that a sense of exhaustion with Washington that began during Barack Obama's presidency has only rose under Trump and became overwhelming in the wake of the first presidential debate.

"It makes you feel like doomsday is coming," Murphy-Lopez said of the tenor Trump has struck in recent weeks. "And the top thing I hear from independents or people who are on the fence is they want politicians who are going to work for the people, not the party. They are tired of elected officials going after each other, they are tired of people making each other look bad."

That knowledge has come through hard work. Murphy-Lopez has knocked on over 4,400 doors to date, many of which in rural Wisconsin are miles apart. In that process, the Democrat says he has heard the overarching belief that neither national Republicans nor Democrats have given much care to rural areas.

"If we walked up and down this main street right now, there are multiple vacancies," he said, pointing down Wisconsin Avenue from the back porch of Timber Lane Coffee in Boscobel. "You go to some of the smaller villages and they're almost dead. Their business districts are gone."

Martin Adams, a 50-year old machinist in Grant County and one of those voters who met Murphy-Lopez at his door, illustrates how being fed up with politics is particularly hurting Trump in the area.

Adams voted third party in 2016 because he felt like there was little difference between the two candidates, but this time around, because of his opposition to Trump, he is going to vote for Biden despite "disliking everything about him."

"I really don't like the two of them," Adams said of Biden and his running mate Kamala Harris. But Trump, Adams said, "is a liar. He has no care outside of his own image. He doesn't care about any of the people. His rhetoric is reprehensible. He is an embarrassment."

Kriss Marion, a small farmer and bed and breakfast owner in the district next door, said the reason for the political shifts is continual farm bankruptcies in the area.

Wisconsin, according to local reports and data from the US court system, led the country in farm bankruptcies in 2019, with the number of farms closing jumping by 20%.

The dairy farmer from Grant County voted for Trump in 2016 because he "had some issues with the Obama administration" and thought "perhaps having a businessman in the White House, not a politician, might be beneficial for me."

But Volenec quickly soured on Trump, especially when the President's focus on re-negotiating trade deals shook up international trade markets and forced him, for the first time in his career, to sell less milk than previous years.

"I am tired of it and I am not going to sit back and let it happen anymore," Volenec said of the downturn in rural America and the farming that is shifting to larger and larger corporate farms. "A lot of these things, were set into motion prior to Trump, but he has had a steroid effect on things."

CORRECTION: This story has been updated to correct the spelling of Shaun Murphy-Lopez and Wayde Lawler's names.