Father and son sentenced for charging police at US Capitol riot 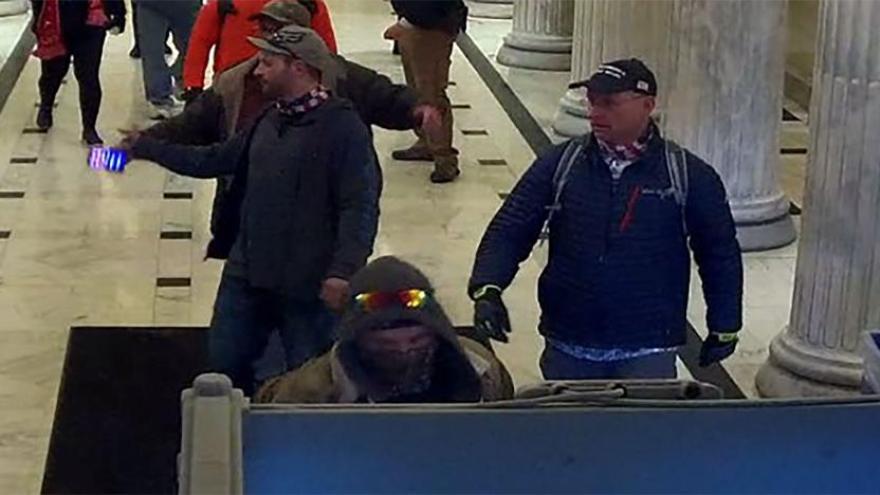 A father and son team was convicted on June 1 for rushing a group of police officers guarding an entrance to the US Capitol on January 6, 2021, helping to allow the mob outside to flood in.

(CNN) -- A father and son team was convicted Wednesday for rushing a group of police officers guarding an entrance to the US Capitol on January 6, 2021, helping to allow the mob outside to flood in.

It was a "major breach point," prosecutors said during a sentencing hearing for the pair on Wednesday. "The Johnson's took part in an unprecedented attack."

Daryl Johnson and his son Daniel pleaded guilty to the felony of civil disorder in January.

Wednesday, Judge Dabney Friedrich said the case was "more egregious than most of the January 6 cases I've sentenced to date." The two men, Friedrich said, put police officers at extreme risk, both in pushing against the officers and allowing the rioters to breach the building.

Daryl Johnson was sentenced to one month in jail as well as $4,000 in fines. Daniel Johnson, who has a criminal history and was the first of the two to enter the Capitol, was sentenced to four months behind bars and ordered to pay $2,000 for damage done to the building during the riot.

"Mark my words Yesterday will be the beginning of the revolution," Daryl Johnson wrote on social media the day after the riot, according to court documents, suggesting there could be "hangings on the front lawn of the capital."

On January 6, Daniel Johnson told someone on Snapchat that he "was trying to find a way into the chamber" while inside the Capitol. Congress was working to certify the Electoral College votes, a process the mob stopped until lawmakers were able to reconvene that evening.

The entrance that the two helped clear, prosecutors said, was used by a large mob to breach the Capitol including a group from the right-wing militia organization the Oath Keepers, several members of which face seditious conspiracy charges for their actions around that day.

During the sentencing, Daryl Johnson said he was in an "emotional state" on January 6, 2021, after his businesses were almost shutdown during the pandemic. "Even being there was a huge mistake," he said of being in Washington that day.

Daniel Johnson told the judge that his "actions that day are not excusable," adding that while he has worked hard his whole life, "one day I compromised everything."

So far, over 180 Capitol rioters have been sentenced, with over 80 receiving jail time. While the Justice Department has charged over 800 people in the Capitol riot breach case, the FBI is still pursuing hundreds of others alleged rioters.