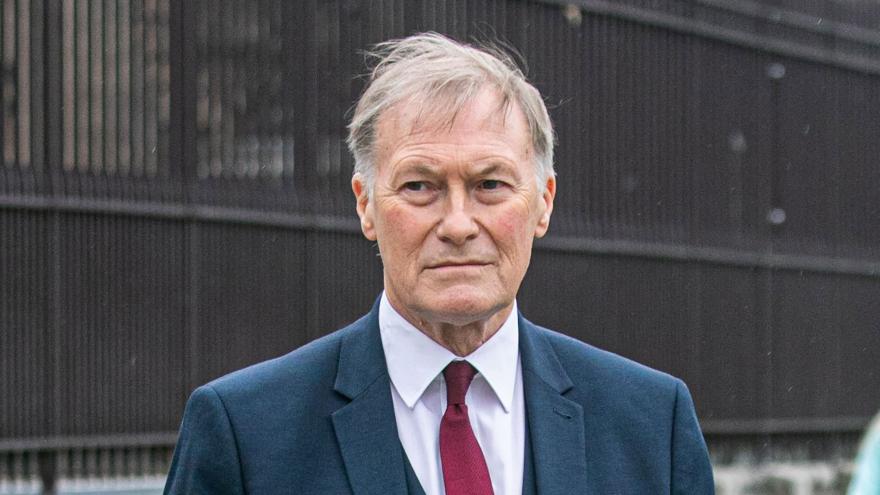 (CNN) -- Counter-terrorism police in the United Kingdom have formally declared the fatal stabbing of British lawmaker David Amess an act of terrorism.

"The early investigation has revealed a potential motivation linked to Islamist extremism," according to a statement from the Metropolitan Police overnight.

Authorities said they believed the suspect acted alone and they are "not seeking anyone else in connection with the incident at this time." Inquiries into the circumstances continue, however, the statement added.

Two addresses in the London area are being searched.

The 69-year-old member of Parliament, who represented Southend West in Essex, was attacked at about midday Friday by a man who walked into a meeting with voters from his electoral district being held in a Methodist Church in Leigh-on-Sea.

"He was treated by emergency services but, sadly, died at the scene," Essex police said.

"A 25-year-old man was quickly arrested after officers arrived at the scene on suspicion of murder and a knife was recovered."

The man arrested on suspicion of murdering Amess is believed to be a British national with Somali heritage, official sources have told the UK national news agency, PA Media, formerly known as Press Association.

The UK's Counter Terrorism Command will lead the investigation into the murder, police said Friday. "It will be for investigators to determine whether or not this is a terrorist incident. But as always, they will keep an open mind," Ben-Julian Harrington, Chief Constable of Essex Police, told reporters.

The killing was another grim moment in Britain's political history.It marks the second murder of a sitting British lawmaker in five years, after Labour MP Jo Cox was killed in her constituency in 2016 by a man with extreme right-wing views, and has reignited discussions about the safety of the UK's elected officials.

The country's political, religious and societal leaders, and its royal family, all condemned the attack and paid tribute to Amess.

Those who knew him described Amess-- who was married with five children -- as a dedicated local representative, deeply embedded within his community and uninterested in the careerism of national politics.

Prime Minister Johnson was joined by all of his living predecessors in expressing shock, and lawmakers from every corner of the political spectrum spoke of their sadness, concern, and anger after another of their colleagues was killed while meeting with his constituents.

"We are shocked and saddened by the murder of Sir David Amess, who dedicated 40 years of his life to serving his community," William and Catherine, the Duke and Duchess of Cambridge, said in a statement. "Our thoughts and prayers are with his family, friends and colleagues."

Home Secretary Priti Patel tweeted Friday questions were "being rightly asked" about the safety of lawmakers, adding she "will provide updates in due course."

MPs in Britain typically meet with residents in their constituencies face to face during "surgeries," and it is uncommon for them to have a security detail.

Conservative MP Tobias Ellwood, who tried to save the life of a wounded police officer during a terror attack on Westminster in 2017, tweeted Saturday that MPs' engagement with the public was a "vital part of our work" but that there was now, understandably, "huge anxiety" among his colleagues.

"Until the Home Secretary's review of MP security is complete I would recommend a temporary PAUSE in face to face meetings," he said.

'A terrible day for democracy'

Aerial footage showed multiple police officers outside the church and an air ambulance at the scene. A large cordon extended down Eastwood Road, where the church is located, with members of the public gathering behind it and multiple side streets closed off.

Once it became clear Amess was the stabbing victim -- and shortly after, that he had died -- Britain's political establishment united in grief. In a statement from Downing Street, Johnson said the MP "was one of the kindest, nicest, most gentle people in politics."

"David was a man who believed passionately in this country and in its future," Johnson said. "We lost today a fine public servant."

The leader of the main opposition Labour Party, Keir Starmer, wrote on Twitter: "Horrific and deeply shocking news. Thinking of David, his family and his staff."

Former Prime Minister David Cameron said Amess was "a kind and thoroughly decent man" and "the most committed MP you could ever hope to meet."

"Words cannot adequately express the horror of what has happened today. Right now, my heart goes out to David's family," Cameron said. Cameron's successor Theresa May added the news was "heartbreaking" and "a tragic day for our democracy."

She described Amess as "a decent man and respected parliamentarian, killed in his own community while carrying out his public duties."

And former Labour leader Tony Blair said in a statement to PA Media: "David and I came into Parliament together in 1983. Though on opposite political sides I always found him a courteous, decent and thoroughly likeable colleague who was respected across the House."

"This is a terrible and sad day for our democracy," Blair said.

Flags outside Parliament were lowered to half staff after his death.

Labour London Mayor Sadiq Khan called Amess "a great public servant" who "loved being an MP." Sajid Javid, the UK's Health Secretary, called him "a great man, a great friend, and a great MP killed while fulfilling his democratic role."

Amess entered Parliament in 1983, initially representing the Basildon constituency. He served continuously in the House of Commons since then, making him one of the longest-serving lawmakers in the chamber.

Amess was knighted in 2015 for his political service. He supported Britain's departure from the European Union, and his main areas of expertise were animal welfare and pro-life issues, according to a biography on his website.

In March, Amess asked a question in Parliament about how to stop "senseless murders" with knives, after a teenager in his constituency was killed in a knife attack.

Within Britain's political bubble and beyond, the murder dredged up painful memories of the shocking killing of Jo Cox five years ago.

That incident rattled the nation and led to calls for lawmakers to receive personal protection when in public -- a sentiment that re-emerged Friday following Amess' death.

"All elected representatives must be able to go about their work without the fear of physical or verbal attacks," Amess' colleague, Conservative MP Eleanor Laing, said in a tweet on Friday following the stabbing. "What has happened to Sir David Amess in Essex today is unforgivable."

Amess was not considered a controversial politician, and despite the length of his tenure, he was not a widely known political figure in the UK.

In a book he wrote last year about being an MP, Amess said Cox's murder was "totally unexpected" and the event had changed the way MPs interact with members of the public, particularly in relation to constituency surgeries.

"These increasing attacks have rather spoilt the great British tradition of the people openly meeting their elected politicians," he wrote.

"I myself have over the years experienced nuisance from the odd member of the general public at my own property. We regularly check our locks," Amess added.

"This is an incident that will send shockwaves across the parliamentary community and the whole country," the Speaker of the House of Commons Lindsay Hoyle said in a statement sent to CNN. "In the coming days we will need to discuss and examine MPs' security and any measures to be taken, but for now, our thoughts and prayers are with David's family, friends and colleagues."

In 2010, Stephen Timms was stabbed during a constituency meeting by a 21-year-old student, who was angry over Timms' previous support of the Iraq War. Timms survived the attack and is still a lawmaker. And in 2000, a Liberal Democrat councilor was murdered at the office of MP Nigel Jones.

Cox's widower, Brendan Cox, wrote that the newsof the attack on Amess "brings everything back."

"My thoughts and love are with David's family. They are all that matter now. This brings everything back. The pain, the loss, but also how much love the public gave us following the loss of Jo I hope we can do the same for David now," he said on Twitter.

Cox was killed just days before the UK's heated referendum on leaving the European Union. That campaign and its fallout raised the temperature of political discourse in the country, and several politicians have since spoken about receiving abuse in person and online.

"This angry, violent behavior cannot be tolerated in politics or any other walk of life," Iain Duncan Smith, a former leader of Amess' Conservative Party, said after his stabbing.