Fantasy football is a billion-dollar pastime. Covid-19 is wreaking havoc with it 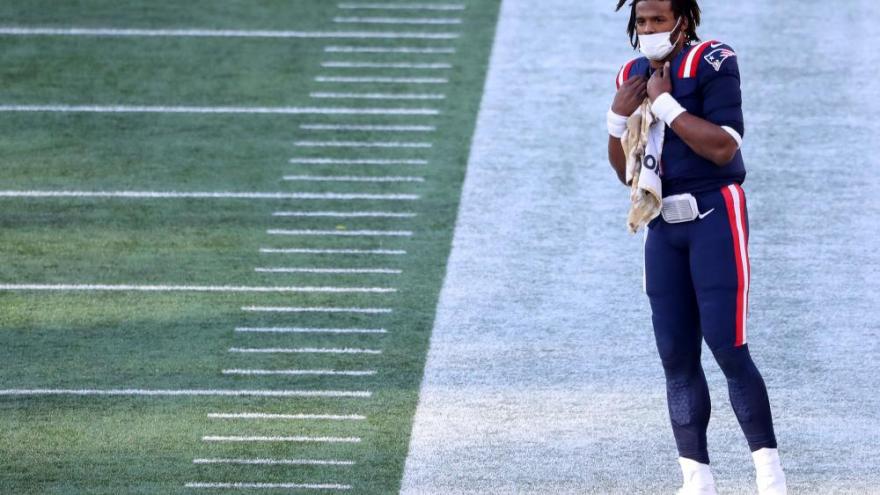 Cam Newton of the New England Patriots missed a key game this season after testing positive for coronavirus.

(CNN) -- This NFL season has been a chaotic mix of coronavirus precautions, postponed games and infected players, all unfolding under a looming concern for the health of players, staff and spectators.

It's also made for the wildest season yet of fantasy football, and this billion-dollar business and its legions of devotees have had to get creative to make it work.

It can feel like a frivolous pursuit at a time when the pandemic is claiming so many lives, but to enthusiasts fantasy football is a welcome distraction from the sobering realities of 2020.

For those who don't play, it works like this: You draft football players from across the NFL to play on your own virtual team. The better they play in real NFL games, the more points they score for your fantasy team in head-to-head matchups with other teams in your league.

This means that every fantasy football team "owner" needs to keep up with stats, schedules and injuries in order to do well.

During a normal season, that's a complex task. This season, it's an all-out scramble.

The NFL has postponed games, fantasy leagues have added new contingencies and fantasy managers have been forced to juggle lineups to replace players who've tested positive for Covid-19.

Take the last few weeks of the NFL alone:

Some sports columnists are wondering whether the NFL can finish its season on time without major adjustments like placing players and staff in a strict covid-free bubble, as the NBA did successfully this year.

With so many things muddling up the season right now, you'd think fantasy football fans would be throwing in the towel. But one expert thinks it's just created exciting new challenges.

Liz Loza, an NFL analyst and fantasy football expert, says engagement among fantasy football players has actually increased this fall at Yahoo Sports, and that's good news at a time when so much of the sports world is struggling.

"Nothing is simple in 2020, broadly speaking. This has been a year that has impossible to plan ahead for anything, and that piece has forced us to really live in the moment in so many ways." she says.

"But this has presented an opportunity to fantasy football enthusiasts and diehards to really challenge themselves. If they win this year, they can say to themselves, 'I've really done some mental and strategic gymnastics, and I've earned this.'"

Fantasy football is the kind of niche passion that can either inspire intense 45-minute conversations or make people's eyes glaze over at the first mention of a roster deadline. But anyone who's had to adjust plans on the fly or fight for little joys during this stressful year will recognize the struggles and triumphs of fantasy football devotees.

"This hobby, in a time where not much else is happening, is a brilliant distraction," Loza says. That's one of the reasons she thinks there's been a spike in interest in fantasy sports. "This fall and winter, you're probably going to be staring at the ceiling at 3 a.m. a lot," she says, "and you might as well be doing it while thinking about your fantasy roster."

The fantasy football industry has been forced to adapt

Like the NFL, these sites have been scrambling to adjust.

On Yahoo's popular show "Fantasy Football Live," of which Loza is a part, cast members have had to get used to a new virtual set. Analysts have created new statistics to help fans create plans for their fantasy teams, and team owners have had to make contingency plans to keep their lineups from imploding when games are postponed or players are quarantined.

While postponements and the sudden absence of key players have bred frustration, they've also created what the fantasy sports world, and people in general, need to stay upbeat right now: New and interesting things to talk about.

And, danger and disappointments aside, this unprecedented football season may be leading people to appreciate sports in a way they may not have before.

"The things that I love most about sports regardless of gender, age, race, creed, is we love the stories -- we love something we learned about the human condition," Loza says.

And as long as games keep being played and players stay safe, fantasy football team owners will be along for the ride -- no matter how bumpy it may get.