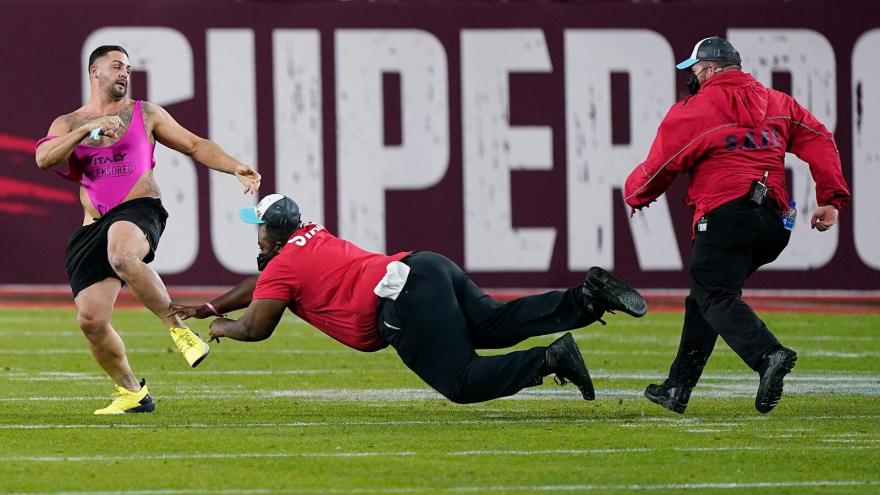 A fan in pink one-piece runs on field during the second half of Super Bowl LV between the Tampa Bay Buccaneers and the Kansas City Chiefs, on Sunday, February 7.

(CNN) -- An unidentified fan ran onto the field at Super Bowl LV and interrupted the game right as it was winding down during its fourth quarter.

The fan, who sported a pink one-piece bathing suit and black shorts, appeared when there was about five minutes remaining in the game, and the Kansas City Chiefs had possession of the ball on second down.

"Someone has run on the field, some guy with a bra," announcer Kevin Harlan said during the debacle. "He's pulling down his pants. Pull up your pants my man! Pull up those pants!"

Video of the incident shows the fan break a tackle with a spin move.

"He slides at the 1 (yard line) and they converge on him at the goal line," Harlan said, as the unidentified fan is seen getting tackled. "Pull up your pants, take off the bra and be a man!"

"And the players with hands on hips at the other end of the field are looking at him and shaking their heads and saying 'Why oh why is this taking place in a Super Bowl?'" Harlan said.

CBS then cut to a commercial as security officials handled the fan.

The Buccaneers defeated the Chiefs 31-9.