Family thanks delivery driver who saved woman in dog attack 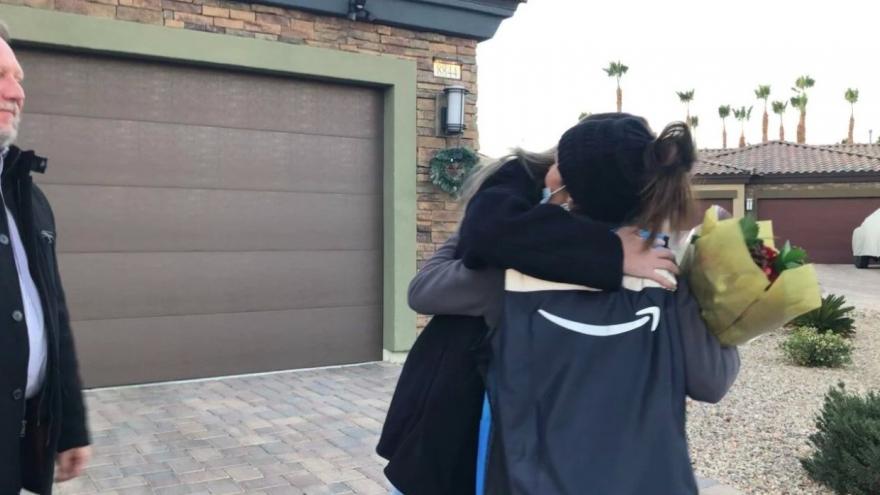 LAS VEGAS (KVVU) -- UPDATE: On Friday, the family whose daughter and dog were saved from a dog attack by an unknown delivery driver, got to meet and thank the driver in person.

Lontz was working on Friday and had to deliver a package to the Ray family, so FOX5 was there to capture the reunion.

Lauren Ray, the 19-year-old woman who Lontz shielded from a dog attack on earlier in the week on Dec. 13, thanked her and handed her flowers while her father handed her a card.

“I didn’t have enough time to say thank you. I was just shaken up ... but no I’m so glad I got to see you again and it means a lot to me," Lauren Ray said.

“I wish it was different, you know I wish more people would act and I’m just glad I was here to do it," Lontz said.

Lontz added she would hope someone would do the same if it was her child.

"Phew...the screams made me think of my own child I would only hope someone would jump in and help her if she was in a similar situation. I wouldn’t even think it’s motherly it’s just- it’s the human thing to do," Lontz said.

She said delivery drivers go through a lot, that the public does not see captured on cameras.

"Two days prior, I had been bit by a dog. Two days before that, I had saved a baby that wasn’t even two-years-old yet--locked in a house. I mean we really go through a lot and we’re there when other people aren’t and sometimes it’s not even recognized. I have a coworker who put out a fire the other day. It’s just--we’re really there when sometimes nobody’s there. And we’re just doing our job at the end of the day," Lontz said.

After the reunion a team from Amazon and 702 Logistics surprised Lontz with her family.

"We saw that video and honestly that was something that I’ve never seen before. And just appreciate your service to Amazon and really to your community," a representative from Amazon said.

Amazon gave Lontz and her family four tickets to Enchant along with backpacks filled with gifts for the family.

At the very end the group took a photo and yelled Lontz's classic line -- "Bad dog!"

On Monday, a Ring doorbell camera was activated when 19-year-old Lauren Ray stepped out of her parent's home in the northwest valley.

An Amazon driver was honking to get a dog out of the street, so Ray called it over. Before the truck driver could warn her the dog is aggressive, Ray's dog Max came running out.

Max and the other dog then started fighting. Ray picked Max up and held him while swatting away the dog that was now going after both of them.

Ray's father, Michael, a real estate agent, was sitting in his car about to show a home when he got the notification from his Ring camera and watched the entire incident unfold in real time on his phone.

“As a dad you know panic mode, I’m a half an hour away from the house, literally it’s like I’m watching a football game and screaming at it I’m like, 'get in the house, get in the house!'" Michael Ray said.

“Well my first thought was save the dog, you know, family pet, I would've let the dog bite me for all I care, I just wanted him to be safe cause he’s so small compared to a pitbull he didn’t stand a chance," Lauren Ray said.

She was circling around until she screamed for help.

“She saw me screaming for help, she could've just stood there, she could've recorded me getting attacked but she chose to step in," she said.

The video shows the Amazon worker rush in and put herself in between the aggressive dog and Ray and Max. She told Ray to get inside.

"I would've been lost without any help, I had no clue what I was going to do. I didn’t know if I was going to get hurt and someone risking their life like that is a really big thing and it means a lot to me," she said.

Meanwhile, Michael Ray was cheering on this neighborhood hero.

"It’s just amazing how she had no fear and wasn’t considering herself or anything, it was just that she saw my daughter needing help and came flying in and saved the day," Ray said.

Max and Ray were both shaken up but OK. She just has some scratches on her side. A neighbor of theirs called police who then called animal control. They picked up the dog.

FOX5 is expecting a call back from the responding officer.

Michael Ray said she saved two people and two dogs that day. His neighbor was out walking his dog when that dog attacked his dog, he had to kick him out of the way and he kept coming back.

“He actually said he was so winded he was about to pass out and she saw it- pulled up told him to hop in her van, he hopped in her van and that’s when they drove past our house," Michael Ray said.

It was Ray's 19th birthday that same day and described it as one she'll never forget. “She helped our neighbor she helped me and I’m so thankful for that," she said.