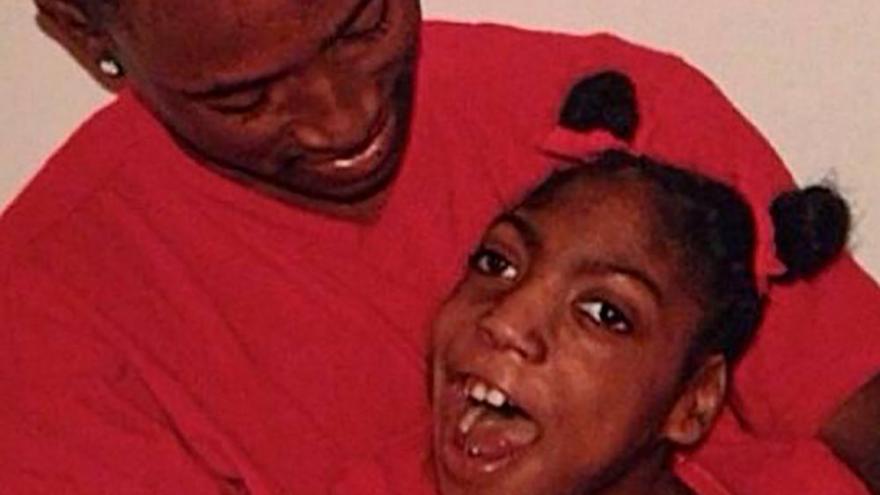 Timesha Beauchamp is pictured with her brother Steven Thompson in Southfield, Michigan.

(CNN) -- The family of a woman who was pronounced dead and later found breathing at a Detroit funeral home in August is suing for $50 million, according to a news release from their attorney.

Timesha Beauchamp, 20, died on Sunday at Children's Hospital of Michigan, lawyer Geoffrey Fieger said. Fieger said her death was a result of "massive brain damage" she sustained after first responders declared her dead and left her without oxygen on August 23.

Beauchamp had cerebral palsy and had been in critical condition in the hospital for several weeks, the release said.

"Our whole family is devastated," a statement from her family reads. "This is the second time our beloved Timesha has been pronounced dead -- but this time she isn't coming back."

Beauchamp's family filed a federal lawsuit on October 8 against paramedics Michael Storms and Scott Rickard and EMTs Phillip Mulligan and Jake Kroll, as well as the city of Southfield, for falsely declaring Beauchamp dead and allegedly failing to provide adequate medical care.

"All of this could have been avoided, had more care been taken," Fieger wrote in a statement.

Beauchamp's family called 911 on August 23 after they found her unresponsive at home, the complaint says. Four first responders arrived at the scene and administered CPR, eventually discontinuing and declaring her dead.

The complaint alleges that the family asked the first responders to come back after they declared Beauchamp dead, at which time they placed a monitor on her that "clearly showed Timesha still had organized electrical activity indicating that she was not dead."

Beauchamp experienced hypoxic brain damage, acute hypoxemic respiratory failure due to pulmonary arrest, and conscious pain and suffering, because of the paramedics' alleged missteps, according to the complaint.

"The City of Southfield sends its deepest sympathies to the Timesha Beauchamp family on her passing," Michael A. Manion, community relations director for Southfield, wrote in an email to CNN Tuesday. "Per city policy, no further comment can be made due to pending litigation."

A spokesperson for the Southfield Fire Department told CNN the department had no comment and that he "could not talk about it." Attempts to reach the Southfield EMS were unsuccessful.

CNN has also reached out to the law firm representing the paramedics.

What the fire department said happened

Menifee said paramedics from the fire department responded to a 911 call about an unconscious woman and arrived at the home "to find an unresponsive, non-breathing female." Lifesaving procedures and aid were administered for about 30 minutes in an attempt to save Beauchamp's life, during which time the Southfield Police Department also arrived on scene, he said at the time.

Menifee said the paramedics found no signs of life, and that the fire department reported their findings to a physician shortly after.

As fire department personnel were clearing the scene, Menifee said a family member approached paramedics and said they heard Beauchamp breathing. They "immediately grabbed their equipment and went in and reassessed her," but "at no time did they find her breathing," Menifee said.

After the firefighters went to back their vehicle again, a family member told a Southfield police officer that they thought they felt a heartbeat, Menifee said. Beauchamp was reassessed again, and for the third time they did not detect any signs of life, Menifee said.

Beauchamp was pronounced dead by a local emergency department physician based on medical information provided by first responders on the scene, the fire department said in an August 24 statement.

The police department also reported their findings to the county medical examiner. Beauchamp was taken to a funeral home where staff made the startling discovery.

Menifee denied at the time that Beauchamp's health condition or race resulted in any sort of mistreatment, saying that his firefighters "feel terrible" about what happened.