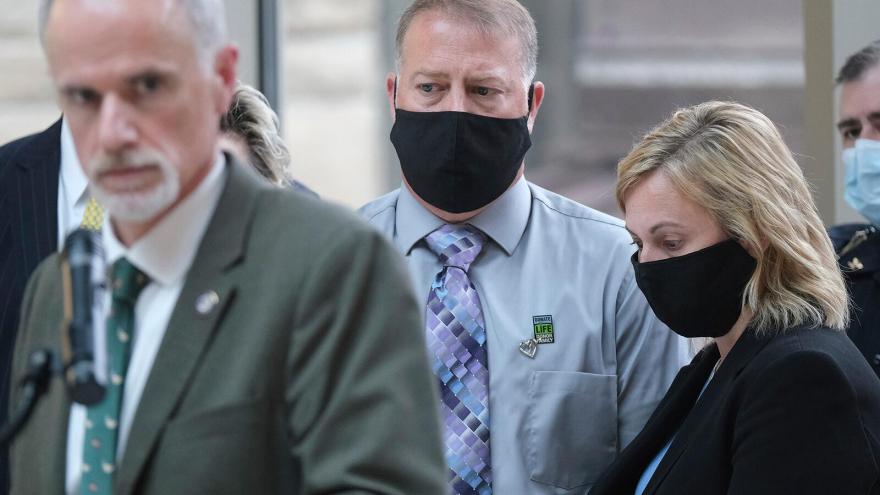 Cory and Shari Foltz (right), filed a wrongful death lawsuit in their son's drinking-related death during an alleged hazing.

(CNN) -- The family of a Bowling Green State University student, who prosecutors say died from alcohol intoxication during a fraternity hazing, has filed a wrongful death lawsuit against the Pi Kappa Alpha International Fraternity, its Delta Beta Chapter in Bowling Green, Ohio, and several current or former members of the fraternity.

Stone Foltz, 20, died in March after he was found unresponsive in his apartment, and a coroner ruled his death an accident resulting from a fatal level of alcohol intoxication during a hazing incident, prosecutors said.

The autopsy showed that Foltz, a sophomore, had a blood alcohol content of .35, which is more than four times the legal limit.

The lawsuit, filed Tuesday in Franklin County Common Pleas Court, alleges that Foltz experienced "extensive hazing," including being "forced to drink an extraordinary amount of alcohol in a short period of time" during a fraternity event.

The lawsuit, which names the national fraternity, the Bowling Green chapter and 20 individuals, is seeking compensatory and punitive damages as well as attorney fees.

Eight people between the ages 19 and 23 were indicted April 29 on various charges in Foltz's death, according to a press release from Wood County Prosecuting Attorney Paul A. Dobson. The charges include felony involuntary manslaughter, reckless homicide, hazing, failure to comply with underage alcohol laws, obstruction and tampering with evidence, the statement said.

CNN on Wednesday reached out to Pi Kappa Alpha International Fraternity and the Delta Beta Chapter for comment on the lawsuit and has not received a response.

Following Foltz's death, the national fraternity said it was "heartbroken" and extended sympathy to "all of those affected by this senseless tragedy." It said it has advised chapter leaders to cooperate with the university and law enforcement.

"We will also pursue permanent suspension of Delta Beta Chapter as well as expulsion of all chapter members from the International Fraternity," the statement said.

In April, the university expelled the Pi Kappa Alpha Fraternity after an investigation into the incident.

"This is permanent loss of recognition -- the fraternity will never again be recognized at BGSU in the future," university spokesperson Alex Solis said in a statement. "This expulsion is because of hazing, which is absolutely intolerable. The University's investigation found the fraternity to be reckless with a disregard for the health and safety of our community.

"This investigation also revealed a deep culture of deception rooted in the organization, filled with dishonesty and disrespect for our community," the statement said.

The eight men who were indicted in the case by a grand jury are scheduled to appear in court on May 19.

The most serious manslaughter charge carries a maximum penalty of 11 years in prison, while other charges include multiple misdemeanor counts of hazing and failure to comply with underage alcohol laws.