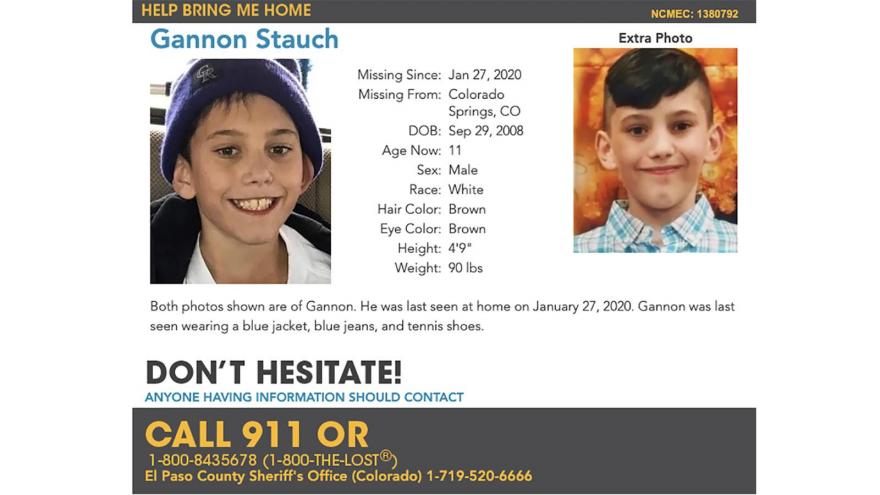 Gannon Stauch would tell his mother jokes every day and was learning how to code before he vanished from his Colorado home last week, his family said.

(CNN) -- Gannon Stauch would tell his mother jokes every day and was learning how to code before he vanished from his Colorado home last week, his family said.

The 11-year-old was reported missing on January 27 after his mother told police he left his Colorado Springs home and never came back.

On Wednesay, Hiott, Gannon's father Al Stauch, and sister Laina Stauch appeared on a video urging the community to help them find the boy.

"If you have anything that is credible, if you're afraid, don't worry about. Imagine my son, how afraid he is. Imagine how afraid Gannon is," Hiott said.

Investigators with El Paso County Sheriff's Office were looking at a neighbor's video surveillance for clues on the boy's whereabouts. Authorities consider Gannon an endangered missing child due to the length of time he's been missing, his need for medication and impending weather. Search efforts have gone on for days.

"I couldn't sleep so I just stayed up and just kinda kept looking through," Roderrick Drayton said.
"I looked through on my tablet, then I said, 'Let me come look on the TV to make sure.' "

He said he showed Gannon's father what he found and they called investigators. When detectives saw the video, they said this is the break they needed, Drayton said.

The sheriff's office has asked the media not to report what he found and given the concerns laid out by investigators about compromising the search, CNN is not reporting details of the video at this time.

When asked about the video Tuesday, Sgt. Deborah Mynatt declined to comment.

"Please understand, we wanted that kept ... because it is a big part of our investigation. And to share it immediately, we hope will not be detrimental, we hope it will not jeopardize the investigation," she said.

"And as a law enforcement agency, that's the worst we could do is to purposely and intentionally jeopardize any investigation."

The El Paso County Sheriff's Office will continue to search specific areas based on tips and leads. "The investigation and the search processes will continue to run parallel with one another in hopes of finding Gannon and bringing him home safely," the sheriff's office said.

Gannon is about 4 feet 9 inches tall, weighs about 90 pounds and has brown hair and brown eyes. He was wearing a blue jacket with a hood, jeans and tennis shoes when he left home, police said.

"He's very young, it's dark and cold outside and we want to bring Gannon to safety," the sheriff's office said.