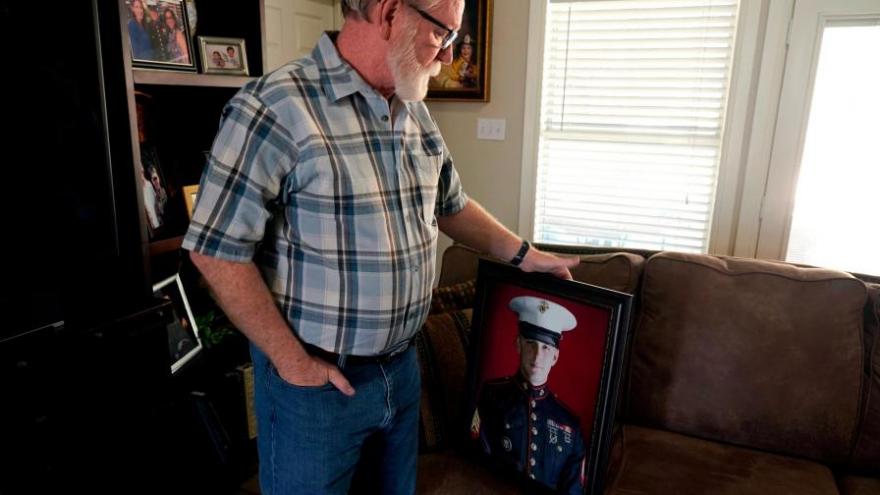 Joey Reed holds a portrait of his son Marine veteran and Russian prisoner Trevor Reed at his home in Fort Worth, Texas, Tuesday, Feb. 15, 2022. Russia is holding Trevor Reed, who was sentenced to nine years on charges he assaulted a police officer.

(CNN) -- The family of an American detained in Russia spoke with President Joe Biden on Tuesday shortly after waving at the President's passing motorcade in Fort Worth, Texas.

Joey and Paula Reed, the parents of former US Marine Trevor Reed, stood for hours in the cold weather in Fort Worth, holding a sign about their son and waiting for Biden's motorcade to pass by in the hopes that President would stop to speak with them. The Reed family's attempt to set up a meeting with Biden ahead of the visit was declined, they said.

Reed's family stood near the road waving as Biden's motorcade passed by before the President's speech. Paula Reed, Trevor's mother, said she saw Biden acknowledge her from his vehicle.

"That was the whole purpose of coming out here, to get his attention," she said, saying it was "absolutely" worth it.

A White House official said Biden called the Reeds "to reiterate his commitment to doing everything he can to bring their son home, to staying in close touch with them through his national security team and to finding a time to meet in person."

After the speech, reporters -- including a CNN producer -- at the scene with the Reed family could hear the President's voice on the cell phone's speaker when he called.

"I just can't imagine what you're going through," Biden could be heard saying during the call. "I don't want you to think that it's not something I constantly think about."

The Reeds grew emotional and stepped away from reporters for the remainder of the conversation with the President, but Paula Reed shared with reporters details of the call after it had ended. She said Biden told them he felt terrible he couldn't meet with them while he was in Texas and promised his scheduler would make an appointment for the family to meet with him in Washington.

Biden told them he said a rosary for Trevor on his way to Texas, according to Paula Reed. "He was just very, very apologetic that he couldn't meet with us," she said.

Reed added that Biden also told them he "thinks of Trevor every day and that he feels horrible that he hasn't been able to bring Trevor home yet. And he said, 'We're not going to stop.'"

"(W)e are working toward setting up a meeting with his family. The President's looking forward to doing that," Psaki told reporters en route to Fort Worth aboard Air Force One.

Trevor Reed has been detained in Russia since 2019. He was sentenced to nine years in prison in July 2020 for endangering the "life and health" of Russian police officers after a night of drinking. He and his family have denied the charges and US Ambassador to Russia John Sullivan called the trial "theater of the absurd."

Joey Reed said he's concerned the invasion of Ukraine will worsen his son's fate, along with that of Paul Whelan, a US, Irish, British and Canadian citizen who was detained at a Moscow hotel in December 2018 by Russian authorities who alleged he was involved in an intelligence operation.

The Reed family, who met with Biden national security adviser Jake Sullivan last December, has said they've been asking for the meeting with the President for months. Shortly after Psaki said a presidential meeting was in the works, Joey Reed told CNN the family has not had any new communication with the White House.

"We want to talk to the President and say, 'You're the only man in the world who can bring him home and you can do it today,'" Reed said Tuesday before the White House's announcement.

Joey Reed said he heard Monday that the meeting during Biden's trip on Tuesday would not happen.

"What we were told second hand was that there wasn't enough time," he said. "I know that every second is planned out for the President every day, but three minutes? Three or four minutes? I think he could spare that."

Trevor Reed has said in recent weeks that he is coughing up blood, and his family is concerned he has tuberculosis. Joey Reed said he spoke with his son as recently as Monday and asked Trevor if he wanted to pass along a message to Biden.

"He said, 'I don't have anything to say to the President. I think that they have forgotten about me,'" Reed said. "We have not (forgotten about him). We love our son and we're going to fight to our dying day to bring him home."

"He called us again this morning. He's been sounding horrible, he's coughing constantly," Joey Reed said. "And then we had even worse news this morning, he called and could barely talk. He's had some sort of accident and he believes he might have broken a rib."

Joey Reed also said Trevor told them he would be sent to a hospital prison on Friday to be checked and while he believed Trevor has been honest about his health, expressed uncertainty that his son's injury was an accident. "It just seems to be getting worse and worse," he said.

Whelan, a former United States Marine, was sentenced to 16 years in prison on an espionage charge he vehemently denies.

Whelan's family has said in recent days that the US should not forget about him and Reed as the US discusses Russian sanctions.

"We are watching the impact of sanctions, expected retaliation by the Russian Federation government, and making what contingency plans we can to support him," Paul's brother, David Whelan wrote in a statement released late last week. "Paul's wrongful detention has always been about the Russian Federation's government extracting concessions from the US government."

"If the Russian Federation demands the concession of sanction removal, let Paul and Trevor's freedom be part of the price the Russian authorities pay in return," David Whelan added in the statement. "Our family will be expressing this view to members of Congress, the State Department, and the White House."

This week, the White House has turned some of its focus to Russia's detention of American basketball star Brittney Griner.

Griner has been detained in Russia after customs officials detected cannabis oil in the athlete's luggage at an airport near Moscow, according to the Russian Federal Customs Service. According to members of the Congressional Black Caucus, the administration is working on the process to get her out of Russia.

The White House, so far, has publicly declined to discuss Griner's detention or their potential efforts to secure her release.

This story has been updated with additional reaction Wednesday.