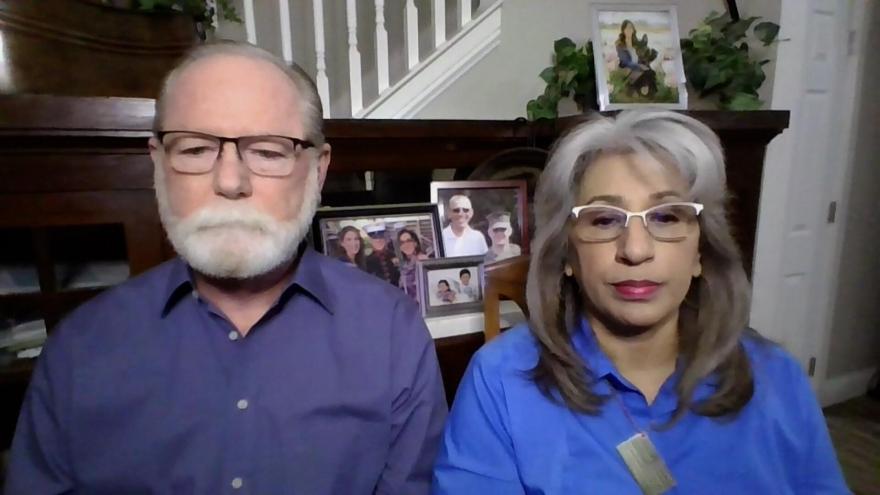 Trevor Reed's parents, Joey and Paula, are seen in this still image. Trevor Reed, a US citizen detained in Russia, has begun staging a second hunger strike in protest of his treatment by Russian authorities, his parents said on March 30.

(CNN) -- The family of Trevor Reed, a US citizen detained in Russia, met with President Joe Biden on Wednesday after holding a protest outside the White House to bring awareness to their son's case.

The meeting, which Reed's family said lasted for more than 30 minutes and left them feeling "optimistic," came as the 30-year-old former US Marine started a second hunger strike in protest of his treatment by Russian authorities, according to his parents.

"Trevor had some sort of injury where he thinks he might have a broken rib. Plus, he has all the symptoms of active tuberculosis. He went to a prison hospital for about 10 days. And then they didn't treat him. They took an X-ray that didn't work," Joey Reed told CNN's John Berman on "New Day" earlier Wednesday as he stood outside the White House with his wife, Paula.

He continued: "And when they brought him back to his prison he said, 'I need to go back. I'm still hurt and sick.' And they put him to solitary confinement again, where he had been for most of the last seven months. So he is protesting that. That's against all Russian regulations and European human rights."

Asked how his son was doing amid the strike, Joey Reed said that an attorney was able to pass along a handwritten note from Trevor Reed in which he said "he's OK."

"He's still coughing blood. And he says he has something protruding out of his side, either a rib or cartilage. And yet receiving no treatment for it except aspirin," Joey Reed said.

Trevor Reed was sentenced to nine years in prison in July 2020 for endangering the "life and health" of Russian police officers in an altercation. Reed and his family have denied the charges against him.

This week's hunger strike is the second one that Reed has staged in recent months. Last November, he held a six-day strike to protest his detainment in Russia and the "numerous and flagrant violations" of his human rights by Russian authorities.

Press secretary Jen Psaki confirmed on Wednesday that Biden had met with the family at the White House.

"During their meeting, the President reiterated his commitment to continue to work to secure the release of Trevor, Paul Whelan, and other Americans wrongfully held in Russia and elsewhere, and to provide all possible assistance until they and others are free and returned home to their families who are advocating so passionately for their release," Psaki said in a statement.

She added: "We are grateful for their partnership and feedback. We will continue to work to ensure we are communicating and sharing information in a way useful to these families."

The Reeds had hoped their protest would secure them a meeting with the President, and after exiting the White House grounds on Wednesday, they described Biden as "very gracious." He had listened "intently," they said.

"He listened intently to everything we had to say until we were through talking. We couldn't have asked for more," Joey Reed said.

Paula Reed added: "We got to get it off our chest, all the things that we've been wanting to say to him, and it's done. We got to say what we wanted to say. He listened intently, and we're grateful for that."

Earlier this month, the Reeds had spoken with Biden over the phone, who called them after delivering a speech in Fort Worth, Texas. A White House official said at the time that the President called the Reeds "to reiterate his commitment to doing everything he can to bring their son home, to staying in close touch with them through his national security team and to finding a time to meet in person."

Asked by CNN's Kaitlan Collins earlier Wedneday whether he'd meet with Reed's parents while they're in town, Biden said, "I'm going to see if I can get to see them. They're good people. I haven't -- We're trying to work that out."

The Reeds said Wednesday that they plan to continue to "spread the word" and keep up public pressure to secure their son's release, as well as the release of other Americans detained abroad.

"And hopefully the President will do what he needs to get our son and other Americans home as quickly as possible before -- before they die, they're injured for life," Joey Reed said.

This headline and story have been updated with additional developments Wednesday.