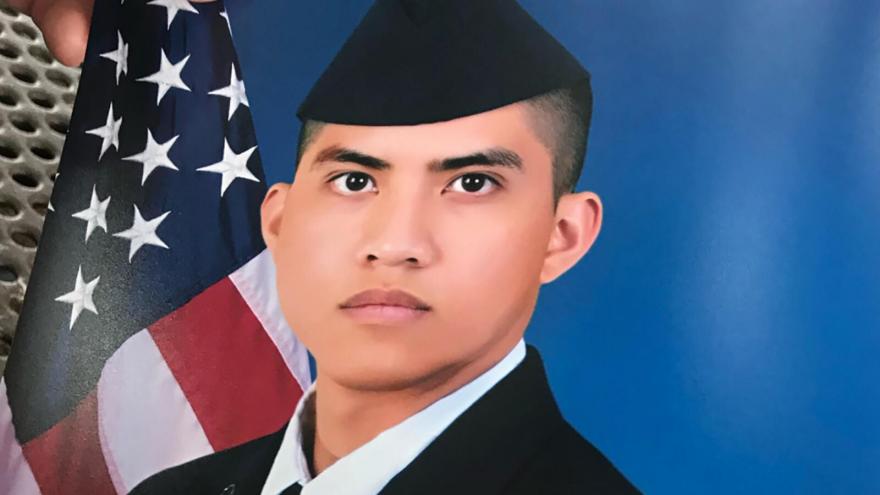 (CNN) -- Family members of the missing 22-year-old airman found his body Tuesday morning off the Texas Coast, according to the Brazoria County Sheriff's Office.

Elijah Posana, 22, was swimming approximately 100 feet from shore at Surfside Beach near Freeport, Texas, Sunday when an individual saw him pulled away by a rip current, according to a news release from the Coast Guard's 8th District Texas Detachment.

Freeport sits along the Gulf of Mexico, about 60 miles south of Houston.

Posana's body was discovered on the shoreline Tuesday morning between access points three and four of Follett's Island Beach, approximately 3 to 4 miles northeast from where he was last seen entering the water, Sheriff Bo Stallman said.

Stallman said Posana's body was discovered by family members who kept searching for him after the Coast Guard formally suspended the search Monday afternoon.

He said he does not have information yet on which family members found Posana's body and if they were the same family members who were with Posana on Sunday when he went missing.

Stallman's office was contacted when the body was found because Follett's Island Beach falls in county jurisdiction, he said.

An investigation into Posana's death has begun, Stallman said.

Coast Guard and local agencies searched approximately 100 square miles over 28 hours for Posana, according to a US Coast Guard news release from Monday.

"We are deeply saddened at the outcome of the search," Lt. Col. Devin Sproston, 509th Security Forces commander said in a statement to CNN. "Every defender on our team is part of the fabric of this unit, this base and our security forces family. We held out hope until the last second that our airman would be found alive."

Posana was an active-duty security response team member assigned to the 509th Security Forces Squadron at Whiteman Air Force Base in Missouri, according to the 509th Bomb Wing. He was on leave with his family in Texas when he went missing on Sunday, the Air Force unit said.

"Our hearts are heavy, and our thoughts and prayers are with Airman Posana's family and friends with deepest condolences for this irreplaceable loss," Sproston said. "We thank our brother and sister Coast Guardsmen for their valiant efforts in locating our wingman and doing their absolute best through their search efforts."